Or did SimCity's just graphics get really realistic? 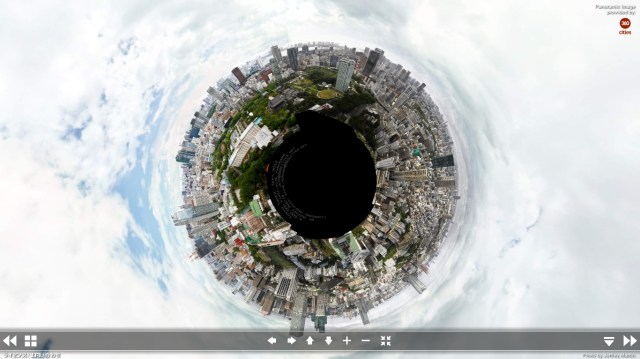 Take a look at one of the largest digital images ever created, a panoramic view of Tokyo from high atop Tokyo Tower. Photographer Jeffrey Martin, who runs the blog 360Cities, has outdone himself with this view of the city. It had to be stitched together from thousands of individual high-res images, but the end result is stunning to behold.

To shoot the photographs, Martin used a “gigapixel robot” called the Clauss Rodeon that mechanically repositioned his Canon EOS 7D digital SLR camera to rapidly capture 10,000 pictures from three different locations on the Tokyo Tower’s lower observation deck. Once the photos are all put together with digital rendering software, it creates a 360 degree view so detailed that zooming in can pick out individual people and objects on the ground all over the city.

According to 360Cities, the full image is 600,000 by 300,000 pixels, 36,000 times larger than an image taken from a 5 megapixel camera. It would stretch out 328 feet by 164 feet if it were printed out flattened, and viewing it digitally isn’t much easier — it’s twice as big as the largest image Photoshop can display. The computer that rendered it had 192 gigabytes of RAM.

Martin did another panorama of Tokyo on the same trip last September, pieced together from four locations on Roppongi Hills Mori Tower. He’s also made 360° views of London, Prague, the Great Wall of China, and other locations worldwide.

“It was one of my dreams for many years to make an image like this in Tokyo,” Martin said in a YouTube video showing off the panorama. “Although I’ve spent months working on this image, I have not seen the whole thing yet!”