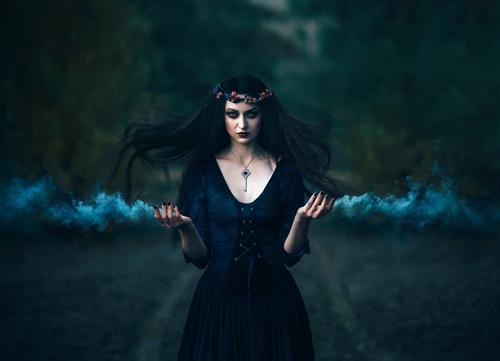 This fashion roundup is not last month’s floofy dress edition. This is … the fashion of the damned? Well, not entirely. (That’ll come at the end.) Due to the nature of entertainment in general, few characters are one hundred percent villainous or heroic, so there will be a few entries on this list that might make you go “Wait! She’s not a villain anymore! This season. Well, most of it ….”

I will most likely leave out someone’s favorite and include someone that only I like, but hey, that’s what the comments are for! If you want to discuss your favorites, please leave a comment and we can all share our favorite fashion.

This category is owned by two very, very bad ladies. First, we have the classic: Cruella de Vil. Nice people don’t go around kidnapping puppies to make coats out of them, plain and simple. If you look at a puppy and see a coat, I’m worried for your soul. However, as much as I’m not into fur in general, Cruella rocked the “Evil Fur-Wearing Fashionista” look hard. One of the creepier aspects of her personality wasn’t so much that she wanted a puppy-fur coat, but that she was willing (even enthusiastic) to harvest the puppies herself. Yikes. Did she have a tannery in her basement? I’m not sure I want to know what else she had skinned and turned into couture! 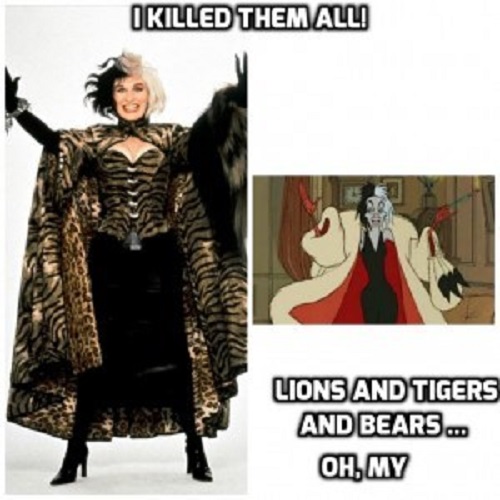 Next up is Jadis, the White Witch of Narnia, as played by Tilda Swinton in the 2005 movie version of The Lion, the Witch, and the Wardrobe. The cloak she wears in her sleigh is, to quote a commenter on The Mary Sue from the last fashion article I wrote, “… so big it almost has its own conscience.” Again, people who aren’t up to no good don’t wear that much fur. At least, that’s the impression I’m getting from villainous history. Unless you count people in, like, Viking shows where they’re layered in survival furs. I guess that’s different. 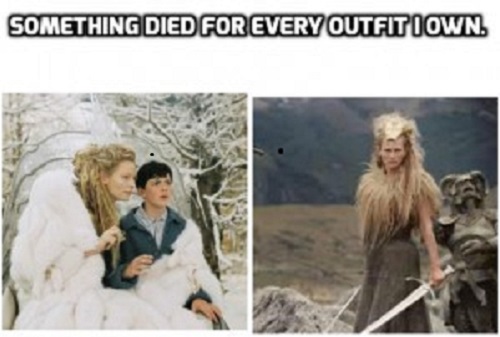 The consummate fashionable villainous fellow is Captain Hook. Barrie described him as having “a handsome countenance,” an “elegance of diction, even when swearing,” and “attire associated with the name of Charles II, having heard it said in some earlier period of his career that he bore a strange resemblance to the ill-fated Stuarts.” My favorite portrayal of Captain Hook is Dustin Hoffman’s in Hook. Long coats, ruffled shirts, and well-maintained facial hair are the stereotypical Captain Hook look, but on Once Upon a Time, the character is a little bit less villainous (mostly) and gets a bit of a makeover as well. Killian Jones’ Hook is all hot moral ambiguity, whether he’s in the medieval-ish fairy tale world or in modern day Storybrook. (And let’s take a moment to appreciate Bob “Born-to-Smee” Hoskins, who Smee’d for two different Hooks: Hoffman in 1991’s Hook, and Rhys Ifans in Neverland in 2011!) 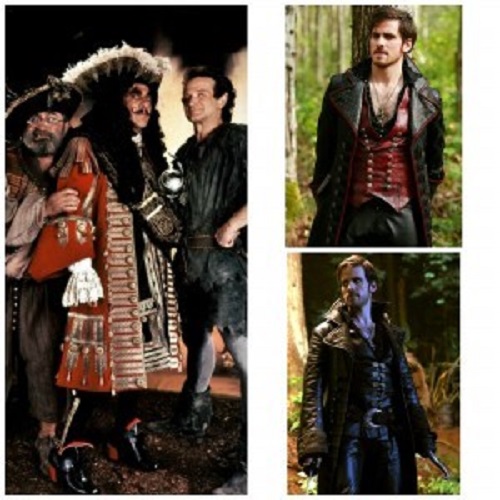 What is it with vests, Killian Jones?

Jareth the Goblin King wears a weird, drapey poet blouse a lot better than anyone really should be able to outside of a Shakespeare in the Park event, and his glitter game is perfection at his masquerade ball. I’ve waxed poetic about Labyrinth a few times before, and apparently, I’m unlikely to stop anytime soon, because here I go about Jareth’s wardrobe. For a single guy who lives with a bunch of goblins, he had a remarkable tailor in the Underground. I can hear him now: “No, I said the pants need to be tighter! I need maximum crotchal exposure!” And some poor goblin stooge is like, “But Goblin King … it’s … off-putting!” And that poor bastard got dumped right into the bog of eternal stench because Jareth knew he was fabulous. 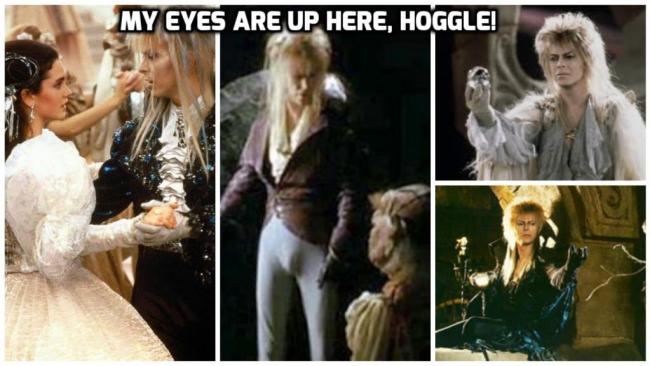 Evil Queens and Their Fierce Fashion

There is nothing Regina has worn on Once Upon a Time that isn’t amazing. Whether she’s wearing modern fashion or quasi-medieval fairy tale world garb, whether she’s having a good season or an evil one, Regina is never anything less than fabulous. 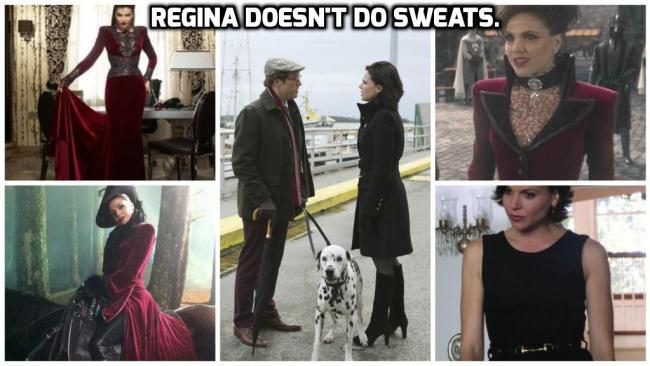 She uses red velvet coats for running about in the forest.

Charlize Theron as Ravenna in the Huntsman movies wears some truly mesmerizing costumes. Whether she’s clad in feathers, molten gold, or both, she’s a fierce, evil presence, made more terrifying by the fact that she can do the things she does without appearing at all inconvenienced by the magnificently popped collars on about 75 percent of her clothing. 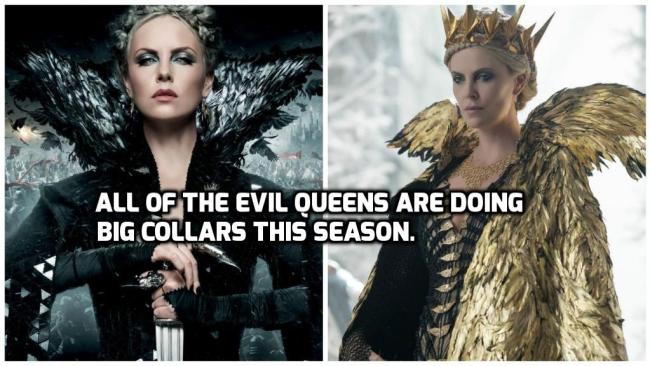 Cersei Lannister’s wild turtleneck-armor outfit from the season finale of Game of Thrones cannot be ignored. The thing shouldn’t look good on a human being, but Lena Headey makes it work. It’s kind of the opposite of Ravenna’s big collars and shoulder pieces, clinging where they protrude, but it works perfectly for one of an often-grey character’s darkest, most powerful moments. 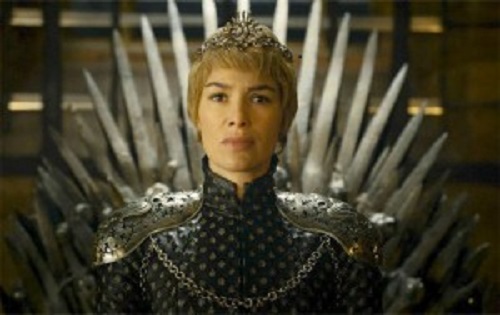 The Dark Lili Dress from Legend

Lili’s princess dress made it into my previous article, and I purposely left out the Dark Lili dress so I could use it for this one. It even gets its own subject heading! The dancing dress scene is definitely my favorite part of the movie, and actually the only one for which I prefer the Tangerine Dream soundtrack over the Jerry Goldsmith version. I’m a sucker for a mad waltz, and this one is possibly the best of its kind. Check this out—the good part starts around the 2 minute mark:

The symbolism is left up to the viewer’s interpretation. Is the dress truly a separate entity, dancing on its own, or has Lili been embracing her own darkness the whole time? Either way, I would chase this dancing thing of beauty too! 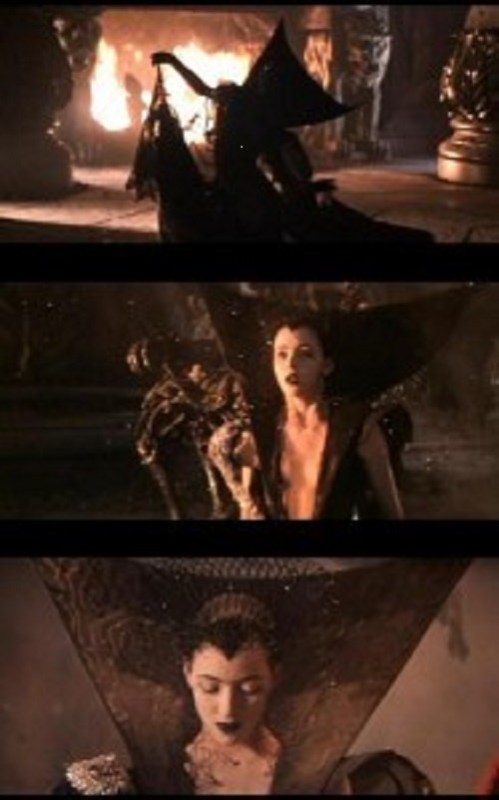 If your dress asks you to dance, don’t disappoint it! (via Fox/Universal Pictures)

Bellatrix Lestrange is one of the few truly, darkly evil characters on this list. Played by Helena Bonham Carter in the Harry Potter movies, Bellatrix was truly devoted, perhaps more than any of the other Death Eaters, to Lord Voldemort. She tortured Hermione and was fascinatingly gleeful over other evil tasks. That said, her clothing has a raggedy gothic charm that mirrors her tattered soul. Plus, she makes granny boots sinister, and that’s saying something. Somewhere in Knockturn Alley, there’s a cobbler with a standing order for Bellatrix’s Evil Granny Boots, and they probably hate to see her coming. 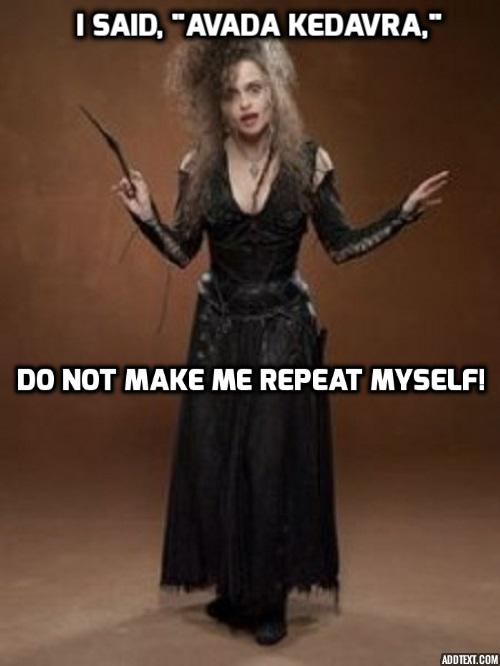 Ororo “Storm” Munroe from the X-Men is usually on the side of the angels, but in the new X-Men: Apocalypse movie, she , and her attire, including her mohawk, gives her a very rock-star rebellious appearance. Comics!Storm sported this look in the 1980’s, and using it in this context in the movie is definitely a callback. Alexandra Shipp, the actor who portrays Storm in X-Men: Apocalypse, actually shaved her head for the part. That’s commitment! Her walk on the wild side doesn’t make her an actual villain, but for much of the movie, she plays the role of antagonist well. 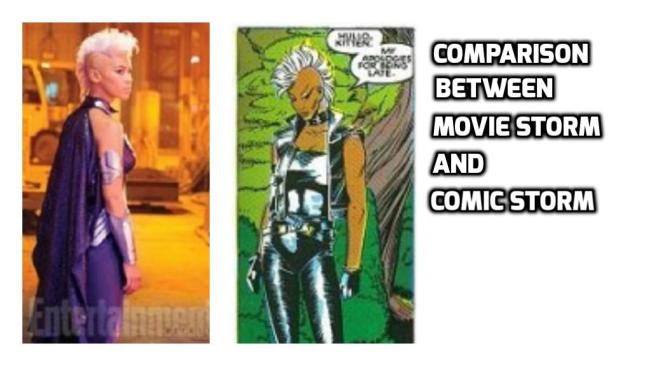 She coulda been a Planeteer.

A huge shoutout needs to go to to Effie Trinket and the fashion of Panem’s Capitol in The Hunger Games, which was used not just for stunning visual effect, but also to drive home the incredible divide between poverty in the districts and extravagance in the Capitol. 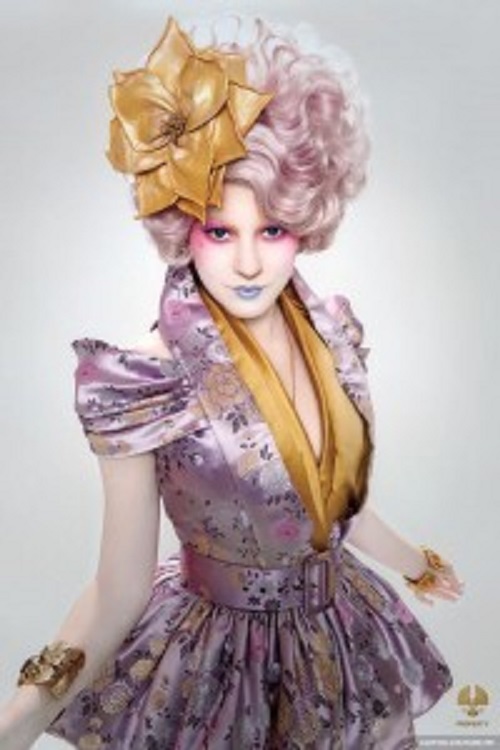 This dress? It’s my anti-poverty shield! (via Capitol Couture)

I would also like to include Catwoman, because being bad (or morally ambiguous, anyway) looks great in a catsuit. Whether we’re talking about Eartha Kitt, Michelle Pfeiffer, or any of the other live-action Catwomen, so many other costumes have been inspired by her simple black suit that I couldn’t leave her off of this list. 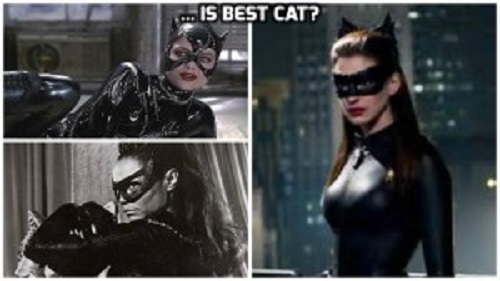 Also worth an honorable mention is Lucifer Morningstar from Fox’s TV show Lucifer. Tom Ellis looks way too nice in a suit or a vest to not be taken at least a little bit seriously. I mean, if you don’t, he can expose your sins to the rest of the world and out me as the monster I really am … ahem, if he were real, that is. 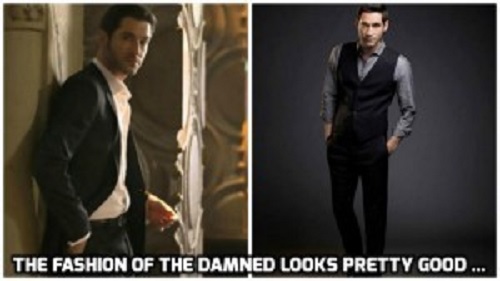 The costume world is made much more interesting by the incredible fashion of villains and characters who experience temptation or take a walk on the wild side. Tell us your favorite wicked looks in the comments!