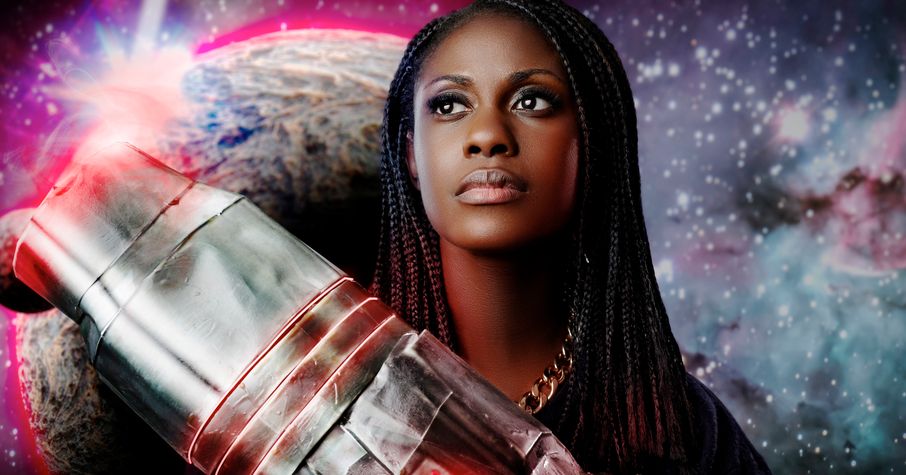 Sci-fi, fantasy, and music have always had a symbiotic relationship. In this Internet age of pop culture literacy and media remixes, that symbiosis is even more apparent. Today, we’re taking a look at just a few of the memorable references to science fiction and fantasy in music.

Novelty songs aren’t included on this list, which means you won’t see tracks like Leonard Nimoy’s “The Ballad of Bilbo Baggins” or Rachel Bloom’s NSFW “F*** Me Ray Bradbury”. Bands like “Harry and the Potters,” which were created specifically to celebrate a certain fandom, are also not included. Music and speculative fiction have such a long, entangled history that it would be impossible to include every great song that references sci-fi and fantasy here—in the comments, let us know what you’d add to the list!

“Tear In Your Hand,” Tori Amos

Tori Amos’ 1992 song “Tear In Your Hand” references Neil Gaiman and his comic book series The Sandman:”If you need me, me and Neil’ll be hanging out with the Dream King/ Neil says hi, by the way.” That lyric launched an intense friendship and artistic relationship between the writer and the singer. Gaiman reached out to Amos after a friend introduced him to “Tear In Your Hand,” and the pair have been collaborating and referencing each other in their work since. Gaiman is mentioned in many other Amos songs, including “Horses,” “Space Dog,” “Snow Glass Apples,” and “Not Dying Today.” Gaiman has written for Amos’ tour books, and included Amos as a talking beech tree in his fairy tale novel Stardust.

RELATED: 12 Books to Read If You’re a Fan ofAmerican Gods

In the 2005 Talib Kweli song “Miss Hill” on Right About Now, he mentions visiting landmark Brooklyn bookstore Nkiru Books with singer Lauryn Hill, before she released her seminal album and had to contend with the pressures of fame:

“She used to love to buy the books by Octavia Butler
Parable of the Sower, the main character’s name was Lauren
What the album did for black girls’ self-esteem was so important.”

Fatboy’s Slim’s 2000 hit, “Weapon of Choice” from the album Halfway Between the Gutter and the Stars, is probably most remembered from its music video, which features a dancing Christopher Walken. But Dune fans might have another reason to recall this early aughts hit. The song’s chorus has the lyric “walk without rhythm and it won’t attract the worm,” which references a line from David Lynch’s adaptation of Frank Herbert’s Dune. There are arguably other references to Herbert’s sci-fi epic in the song as well.

Bowie’s 1974 song “1984” is, not surprisingly, an homage to Orwell’s dystopian novel. “1984” appeared on the album Diamond Dogs, which was intended for use in a stage musical based on 1984. However,Orwell’s estate ultimately refused permission for the musical.

RELATED: 15 Insightful George Orwell Quotes From1984 and Beyond

Want more sci-fi and fantasy? Sign up for The Portalist’s newsletter!

Rapper Sammus uses allusions to sci-fi and fantasy to illustrate her inner life and to address themes like mental health, heartbreak, race, and feminism. Her moniker is a tribute to the Metroid character Samus Aran, and Sammus sometimes performs wearing an arm cannon like the one worn by her video game namesake. Sammus’ “Mighty Morphing'” explores identity, referencing the Power Rangers with lyrics like “I am more things than I’m reporting/Let’s not force it/I’m mighty morphing.” The track mentions everything from Madeleine L’Engle’s A Wrinkle in Timeto Back to the Future as Sammus explores racial prejudice and pressure.

RELATED: The Best Video Game Soundtracks of All Time

Many of Zeppelin’s songs reference popular speculative fiction, both implicitly and explicitly. For instance, “Ramble On,” from their 1969 album Led Zeppelin II, contains lyrics obviously inspired by Tolkien’s Lord of the Rings:

“‘Twas in the darkest depths of Mordor
I met a girl so fair
But Gollum, and the evil one crept up
And slipped away with her.”

The Beastie Boys’ oeuvre is filled with references to science fiction pop culture, from Star Trek to Star Wars. For instance, “The Brouhaha,” from their 2004 album To the 5 Boroughs, has the lyrics:

“Communicator check one two one two
This is Bones McCoy on a line to Sulu
Set the bullshit to warp factor one
Check your tricorder set your phaser to stun.”

The Pink Floyd song “Childhood’s End” from the 1972 album Obscured by Clouds was inspired by Arthur C. Clarke’s book Childhood’s End, which chronicles an insidious alien invasion. Clarke’s novel is also paid tribute to in the Genesis song “Watcher of the Skies.”

“The Drowning Man,” The Cure

The Cure’s 1981 song “The Drowning Man,” from the album Faith, is inspired by Mervyn Peake’s gothic fantasy saga Gormenghast, and directly references the character Lady Fuschia. “All Cats Are Grey,” another song on Faith, may also be inspired by Peake’s tale of a crumbling castle and the dysfunctional people who inhabit it.

“To Tame a Land,” Iron Maiden

Iron Maiden’s “To Tame a Land,” from the 1983 album Piece of Mind, is a love letter to Frank Herbert’s Dunenovels, with lyrics like:

“He is the Kwizatz Haderach
He is born of Caladan
And will take the Gom Jabbar.”

“How Great,” Chance the Rapper

Chance the Rapper’s lyrics are full of pop culture references that will resonate with ’90s kids, particularly those of us who grew up reading Harry Potter. In his 2016 mixtape Coloring Book, there are a couple of great references to Hogwarts and The Boy Who Lived, particularly this one from “How Great”:

“Shaback barak, edify
Electrify the enemy like Hedwig till he petrified
Any petty Peter Pettigrew could get the pesticide.”

“The Veldt,” by Deadmau5

“The Veldt,” from electronic musician Deadmau5’s 2012 Album Title Goes Here, is inspired by the Ray Bradbury short story “The Veldt,” in which children become dangerously attached to their new virtual reality room.

The song’s chorus pays tribute to the story’s original name, “The World the Children Made,” while the verses reflect the potentially sinister appeal of virtual reality:

“Outside, the lions run
Feeding on remains
We’ll never leave, look at us now
So in love with the way we are.”

This song from The Strokes’ 2001 album Is This Ittakes its title from Aldous Huxley’s Brave New World. In Huxley’s dystopia, Soma is a drug that has a euphoric effect on those who take it, and is used by the government to sedate the citizens of the World State.