Rumor: Apple is Working on a 13-Inch Version of its Retina Display MacBook Pro 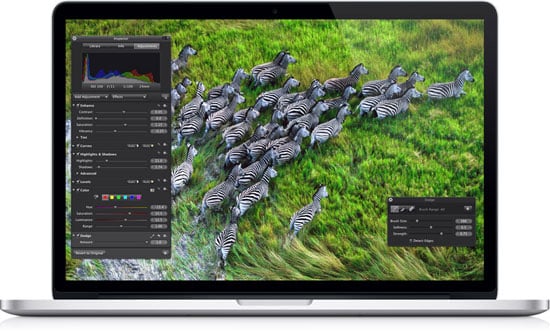 Apple surprised onlookers during WWDC 2012 when the company unveiled the MacBook Pro with Retina display — a completely new kind of high-end laptop. The 15-inch laptop is super thin, super fast, and has the same super sexy Retina display that debuted in the iPhone 4. Now, it seems that Apple may soon be bringing out a smaller verison of these super expensive laptops in time for the Holidays.

Citing KGI analyst Ming-Chi Kuo, Apple Insider believes that a 13-inch version of the Retina MacBook Pro will be announced in September. For his part, Kuo has extremely reliable information about future Apple products, with most of his predictions proving correct during WWDC.

These new laptops, like the current Retina model, would have solid-state drives and no optical drive. Kuo believes that the smaller laptop would have a slightly thinner screen as well, capable of supporting 2,560 by 1,600 pixel resolution. The hypothetical laptop is believed to also use the Intel Ivy Bridge processor, but would differ from its larger counterpart by using Intel’s HD 4000 integrated graphics.

Kuo claims that Apple had planned to unveil both models at WWDC, but could not due to issues surrounding the increased complexity of assembling the smaller laptops. Given the sky-high price for the 15-inch Retina MacBook Pro, it’s easy to see why Apple might want a cheaper version available as well. That is, assuming that it is cheaper.

Of course, as is the case with all Apple rumors, we’ll just have to wait and see.