The 11 Most Groundbreaking Buffy the Vampire Slayer Episodes

In every generation, there is a chosen one ... 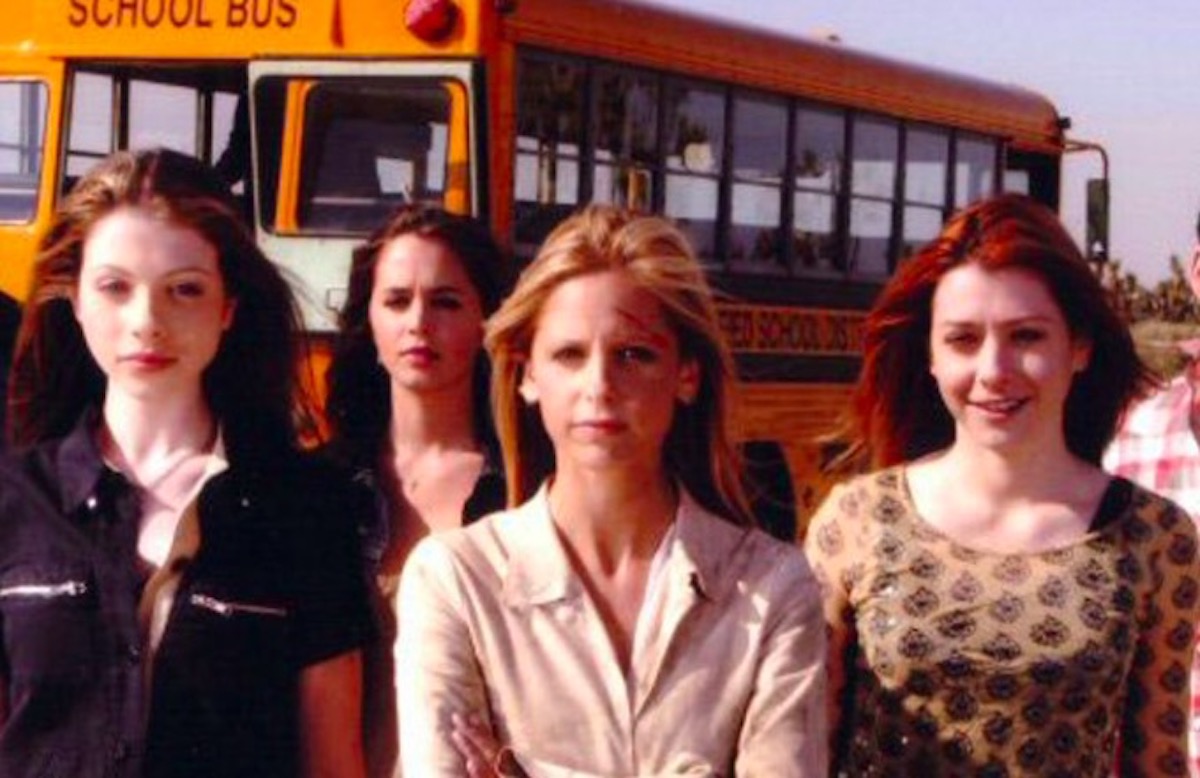 Buffy the Vampire Slayer is undeniably one of the most groundbreaking teen genre series of all time. From its very first episode in 1997, Buffy turned the traditional “dumb blonde” damsel in distress trope on its head, portraying Buffy as a formidable warrior who had the unique ability to save Sunnydale from the forces of darkness. The show, which ran on the WB and then UPN from 1997 to 2003, changed our understanding of what it means to be a hero.

The beloved Joss Whedon series consistently treated its adolescent protagonists and their respective demons with care and tact, tackling themes of love, family, friendship, responsibility and fear on a weekly basis. Not to mention the fact that Buffy depicted one of the first realistic and nuanced romance relationships between two women ever on network television, cementing Willow and Tara’s beautiful bond in TV history forever.

RELATED: How Gay Is Your Geek TV?

It’s hard to sum up all of the ways in which Buffy changed the television landscape or the many doors the vampire slayer opened up for shows to come. There are a few episodes, though, that stand above the rest as the most groundbreaking, genre-bending triumphs of the series—episodes that would pave the way for more innovative, unique and forward-thinking TV stories in the future.

Just moments into the first episode of the series, it’s clear that Buffy is a different kind of show. We watch as a flirty young couple sneaks into a high school, looking for a place to hook up, and as the music grows more ominous, we immediately fear for the innocent blonde as she says, “Are you sure this is a good idea?” Just as her partner in crime assures her that there’s no one around, she turns to him with glee, her face transformed into that of a terrifying creature with sharp fangs. She sinks her teeth into his neck, and the credits roll to introduce us to Buffy the Vampire Slayer.

This scene is only the first of countless times the show will subvert our expectations, work against gender norms, play with and destroy traditional horror tropes ,and show us that anyone can be a hero…or a villain. In this pilot, we’ll go on to meet Buffy, learn of her abilities, and watch as she starts to make friends, all the while knowing to always expect the unexpected.

Throughout Buffy’s run, the series was known for its ability to represent the struggles of adolescence in a real and provocative way, often utilizing metaphor to demonstrate the evils of high school. These metaphors became especially affecting in this Season 2 two-parter, particularly within Buffy’s relationship with Angel.

In one of the series’ most shocking moves, Buffy chooses to lose her virginity to Angel, but after making love for the first time, Angel literally loses his soul. For the rest of the season, Buffy will have to deal with the reality that the man she loves is evil, eventually facing the impossible realization that she must destroy him. Having sex literally turns Angel into a monster, and although this turn of events makes sense within the plot, it’s also one that plays out far too often in the real world. Whedon set out to make a point about teenage romance with these episodes, and Buffy’s situation became one that many young women could unfortunately relate to.

Most shows will never be able to say they killed off their entire cast in one fell swoop, but Buffy the Vampire Slayer does just that. In this alternate reality episode, Cordelia wishes that Buffy had never come to Sunnydale, completely unaware of the terrible implications the slayer’s absence will have on the town. The resulting episode is an entertaining, insightful romp that sees Willow and Xander become vampires, Giles and Oz act as vigilantes and Buffy herself grow jaded and hardened by the loneliness of her slayer life. Cordelia isn’t alone in longing for the world she once knew. In the end, our protagonists fight each other to the death, and even Buffy meets her ultimate end. While Giles is able to reverse the spell and bring things back to normal, the dark look at the other side has lasting effects on the characters and viewers alike.

One of the more well-known of Whedon’s experimental episodes, “Hush” finds its success in its concept: most of the 45-minute episode is completely without dialogue. When a group of chillingly demonic creatures called The Gentleman invade Sunnydale, they capture the voices of everyone in the town in order to ensure civilians won’t scream while the Gentleman’s minions cut their hearts out. It’s a gruesome premise to begin with, but the lack of familiar banter between the characters as they struggle to figure out what to do makes the episode truly haunting, and a particular triumph for Whedon as a director. It’s said that Whedon chose to write a “silent” episode as an explicit challenge to himself, and the result is one of the most memorable and terrifying installments of the entire series.

Although by far the strangest finale of any Buffy season, “Restless” is also one of the most unique and influential episodes of the series. While the main climax of Season 4 happens in the episode before, “Restless” serves as a strange, dreamy coda that takes on a format unlike any other Buffy episode. Lacking a traditional narrative, the episode explores many of the characters’ dreams as they sleep, playing with metaphors and bombarding us with information we may only understand as the series moves forward. The visions foreshadow numerous events that will come later in the show, including the arrival of Buffy’s sister Dawn, and prove that the team behind Buffyknew exactly what they were doing at every turn. While the “story” is hard to follow and the revelations muddled, Joss Whedon maintains that the only truly meaningless part of the dream sequences is the inexplicable but wonderful Cheese Man.

Grief and despair are hardly foreign feelings to the characters of Buffy the Vampire Slayer, but never are these emotions as intense and all-encompassing as they are in Season 5’s “The Body.” The devastating episode depicts the immediate aftermath of Buffy’s mother’s death, a sudden and cruelly natural event that took both the cast and audience by surprise. In a world where Buffy is expected to fight vampires and demons every day, it’s heartbreaking to watch her realize how helpless she is in the face of her mother’s brain aneurysm, a wholly human ailment that feels as if it has no place in this fantastical world. The episode is unnerving and even uncomfortable, lacking the usual comforting music or non-diegetic sound of any kind. The silence of The Body is palpable as we watch each character react to the death in their own way, encapsulating a feeling of loss that has rarely been replicated on television to this day.

Buffy’s Season 5 finale proves there’s nothing the groundbreaking series was too afraid to do, including killing off Buffy herself. Written and directed by Joss Whedon, the episode was originally crafted as a finale for the entire series and would be the last episode that aired on the WB before being picked up by UPN. Although the show continued on for two more seasons and Buffy lived to fight another day, “The Gift” doesn’t lose any of its emotional weight as Buffy chooses to jump to her death in order to save her sister Dawn’s life. Buffy had already spent 5 seasons wrestling with her superhuman abilities as a slayer (not to mention her recent responsibilities as Dawn’s primary caretaker), but this is the episode that proves how much our protagonist has truly grown. Her love for her sister and willingness to sacrifice for Dawn is Buffy’s greatest gift, and her final words ring poignant. “The hardest thing in this world is to live in it,” Buffy says. “Be brave. Live. For me.”

If you watch only one episode of Buffy the Vampire Slayer, let it be “Once More With Feeling.” (But, please, watch them all.) The infamous musical episode came well before Scrubs’ or Grey’s Anatomy’s or Community’s attempt at song and dance, but “Once More With Feeling” still firmly holds its place above them all. A risky move at the time, Whedon decided to write all of the original songs himself and have the cast sing and dance their own parts, despite their varying levels of musical talent. The result, though, is a stunning, emotional, genre-crushing piece of television that shocked fans and skeptics alike when it aired in 2001. The message of the episode—that in song, people finally speak their truth and their pain—comes at a pivotal moment in the series. It shakes up every relationship that has formed throughout the first six seasons and pushes every character forward in their quest to find out who they truly are. After everyone’s secrets are laid out and the episode’s musical villain asks Buffy and her friends to “Say you’re happy now, once more with feeling,” we come to the intense realization that things in Sunnydale will never be the same.

RELATED: A Vampire Fledgling Gets a Taste of Her Dangerous New World

By its sixth season, Buffy’s writers were no strangers to unique episode formats or unexpected plot devices. Still, “Tabula Rasa” brought along yet a new writing challenge when a spell gone awry simultaneously erased the memories of every major character, forcing the cast and crew to start with a completely blank slate. Confused and scared, the Scooby Gang must try to suss out who they are, where they are, what their relationships are to one another, and why a group of vampires is trying to attack them. While the episode is particularly memorable because of its more comedic moments (Giles and Spike thinking they’re father and son being chief among them), the episode is also masterful in what it reveals about our protagonists in this new light. Despite their lack of memory, our characters’ truest traits are still evident and bursting to break free as their identities make themselves known—for better or for worse.

Buffy’s final episode is what every fan hopes the finale of their favorite show will be. It is satisfying, compelling, emotional, epic, and the perfect ending to a series that lit up the television world for 7 seasons. While “Chosen” beautifully wraps up storylines and relationship arcs in a way that gives audiences a clear sense of closure, it goes a step further in cementing its place in television finale history.

Before Buffy fights her last battle, she does something groundbreaking: She shares her power with others. She bonds together with her best friend to transfer her slayer abilities to girls all over the world, urges them to fight, and empowers them to be strong. The gesture embodies a symbolic empowerment that Buffy the Vampire Slayer has been spreading since the day it aired, and one that still resonates with fans 20 years later. The series proved that a young woman could do anything and be anything, and the finale makes sure we’ll always remember that. In the end, Buffy leaves us all with one mission: “Make your choice. Are you ready to be strong?”