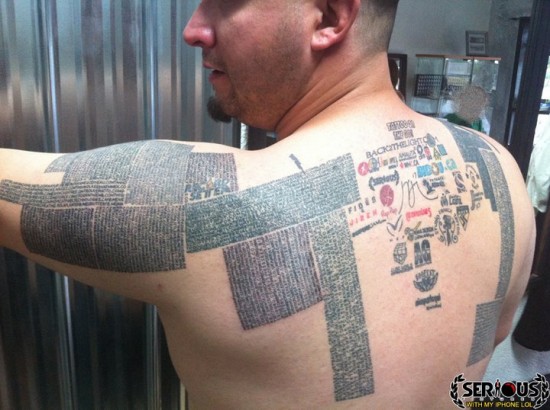 Just when you think you’ve heard it all, another bizarrely specific world record sneaks up behind you, slaps you across the face 400 times with a wet fish, and breaks a world record doing it. Pat Vaillancourt of Quebec currently holds the world record for having the most URLs tattooed on his body. He’s currently at over 10,000, but he shows no signs of stopping and wants to get to at least 100,000 before he quits. Why’s he doing this? To be remembered as a world record holder, oh and to help people.

In his words: “I want to break a Guinness World Record, but more importantly, I want to help others. And this is my way of doing so.” It sounds kind of corny, but he actually is helping people, and he’s doing it by getting URLs tattooed on his body. Weird, I know. The deal is that you can pay Pat $35 and he’ll tattoo your site’s URL somewhere on him. Because hyperlinks don’t work on skin — yet — he’ll also throw it up on his website, Back2thelight.com. The charity part is that he’ll donate half of the payment to help the people of Haiti and Somalia with various things. The other half goes to expenses.

Pat started out with the humble goal of creating a website where people could donate to the same cause. When that didn’t work out so well, he added in the tattoo thing as a gimmick and as a way to break a world record in the process. Obviously he has a ways to go considering he’s only about 10% finished, but he says that over 16,000 companies have reserved spaces and he has high hopes for the future. Of course, the tattooing takes a long time, but Pat had the good fortune of knowing an artist willing to put in the total 10,000 to 12,000 man-hours it will take to finish the project.

Now if you’ll excuse me, I’ve got to go round up money from my coworkers so we can get in on the ground floor of this prime advertising space. You gotta get in on the arms or the torso. Once everything moves below the belt you don’ t make nearly as many impressions.