10 of the Most Terrifying Monsters in Modern Horror Fiction

With Halloween only a few days away, spooky haunts and horrors are at the forefront of everyone’s imagination. I’m sure we can all remember the first monster to give us the heebie-jeebies, whether it was on the big screen or in the pages of a good book.

My first foray into horror fiction involved R.L. Stine and the impressive cast of monsters in his wildly popular Goosebumps series—and even as an adult, I still can’t think of  Stine’s Haunted Mask or The Grool monsters without letting out a shudder. Which got me wondering about the other monsters that have haunted the pages of books over the years: which one left the biggest impact, and which one was the scariest?

Keep in mind that narrowing down this list was extremely difficult—but, that being said, here are 10 of what I personally feel are some of the most mind-numbingly creepy monsters of modern horror fiction. Enjoy!

It/ Pennywise The Clown (It by Stephen King) 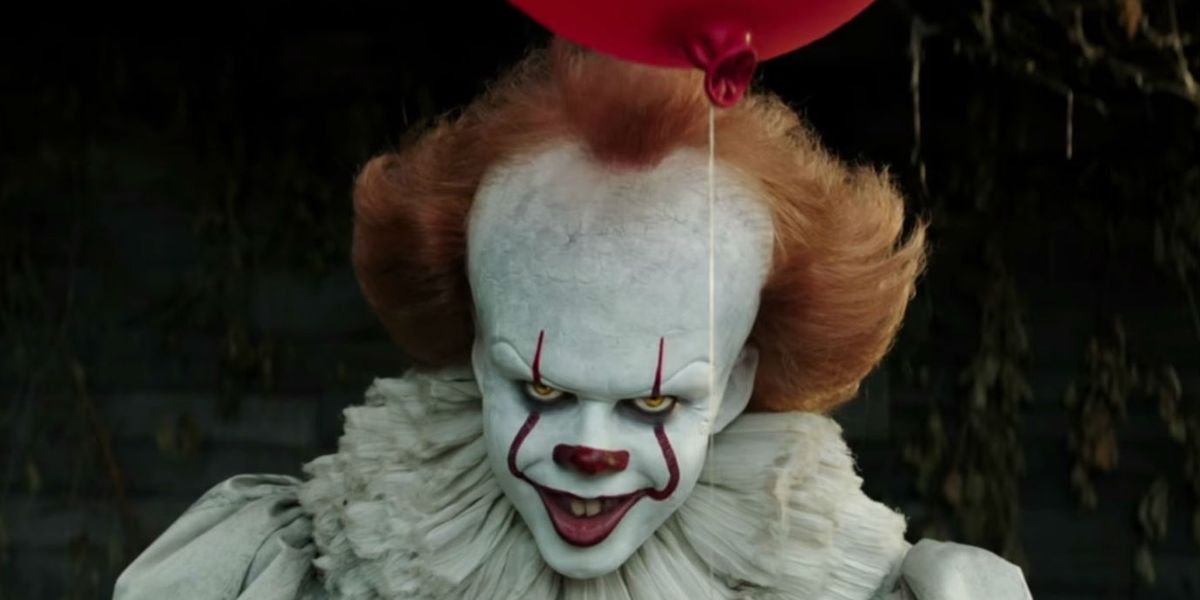 Ugh, it. That unspeakably monstrous evil that, for even more diabolical reasons, decides to morph itself as each of its target’s “worst psychological fear.” When it comes to the town of Derry, Maine (and the children that live in it) what better disguise to wield than that of a clown?

When I first read King’s simple but chilling line “There was a clown in the stormdrain,” I knew I would be diving headfirst into a horror novel that preyed on the subtleties, on the spaces in between imagination and reality where fear could best fester and manifest.

And indeed, I still can’t look at clowns the same way. Tim Curry and Bill Skarsgård’s respective performances as the titular “Pennywise the Dancing Clown” only cemented this aversion, making Pennywise undoubtedly one of the creepiest horror creations of the past few decades.

The Beldam/The Other Mother (Coraline by Neil Gaiman) 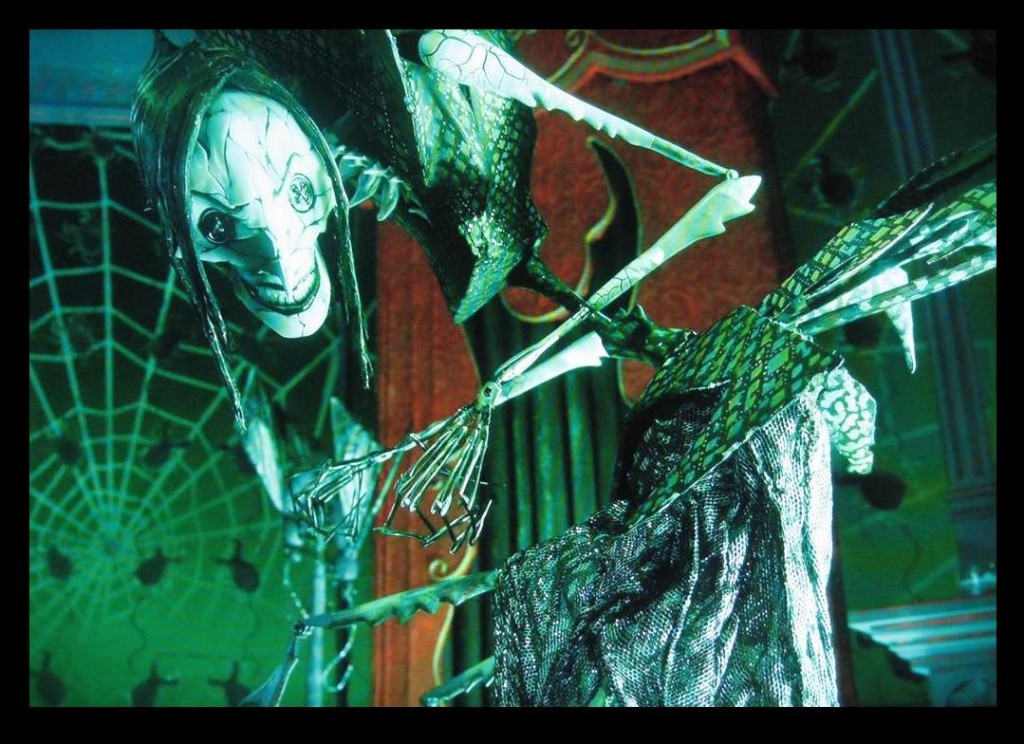 When I first read Coraline, I was the same age as the eponymous protagonist. This meant that the illusions of the too-good-to-be-true Other Mother and Other world had me almost completely fooled until the spine-tingling big reveal.

The abject horror of the Beldam (the true name of the Other Mother) and her diabolical hunger to retrieve the souls of wayward children not only kept me up for maaaany nights—but it kept me on edge whenever I happened upon a random key or mysterious black cat.

While not *technically* a monster, the eerie monstrosity of Area X: the extraterrestrial mutation of Jeff VanderMeer’s Annihilation, was so terrifying and unnerving that it easily earned its place on this spot.

Reading about the strange—yet oddly beautiful—fungal mutations of Area X made my skin crawl in the best way, amplified even further when I realized just how deeply the transformations by this extraterrestrial being affected the world and the characters in it; and furthermore, what disturbing implications it had on the characters’ overall autonomy within the story.

He Who Walks Behind the Rows (Children of The Corn, Stephen King) 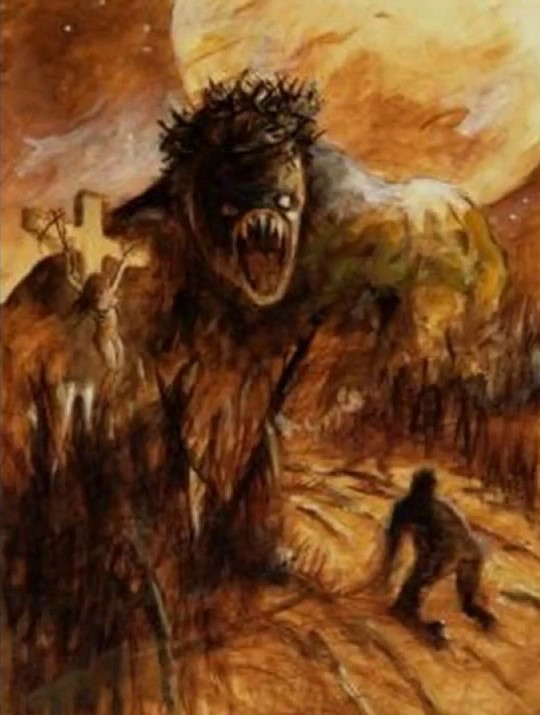 Another Stephen King pick, but rightfully earned. You’d think the creepy telekinetic adolescents of King’s short story “Children of the Corn” would be enough to cause a fright, but the supernatural beast that these children worshipped that ended up taking the cake for one of the creepiest (and most bizarre) monsters I’ve had the pleasure of reading.

He Who Walks Behind The Rows (what a name, right?!) is a demonic spirit that lives amongst the corn stalks of Gaitlin, Nebraska, and took hold of the children of the town. The children formed a cult worshipping this demon, and established a diabolical ritual of sacrificing people (and themselves) to appease it. A perfect example of a situation in which the first monster that appears (i.e these creepy cult children) might in fact just be the foreshadowing of a bigger and more monstrous bad to come.

The Mermaids (Into The Drowning Deep by Mira Grant) 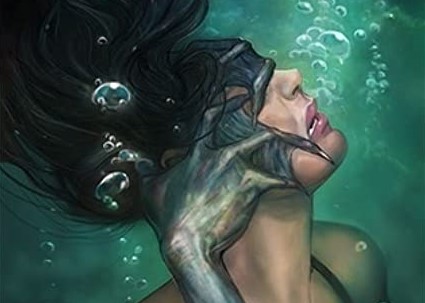 The mermaids of Into The Drowning Deep are not the seafaring naiads of Disney imagination. Rather, the watery beasts of Grant’s sci-fi horror novel pull at some of the deepest fears of the human psyche: claustrophobia, drowning, and being lost to the whim of the unapologetic sea.

When the protagonists capture one of the mermaids in an egotistical bid to prove their existence, they find themselves unleashing a horror much greater (and keyword: bigger) than they could have ever imagined. Creepy because of how incredibly animalistic—yet plausible—these beasts can be, Mira Grant’s creatures of the deep are more than worthy of their place on this list.

The Pale Woman (Scary Stories To Tell In The Dark by Alvin Schwartz, Illustrated by Stephen Gammell) 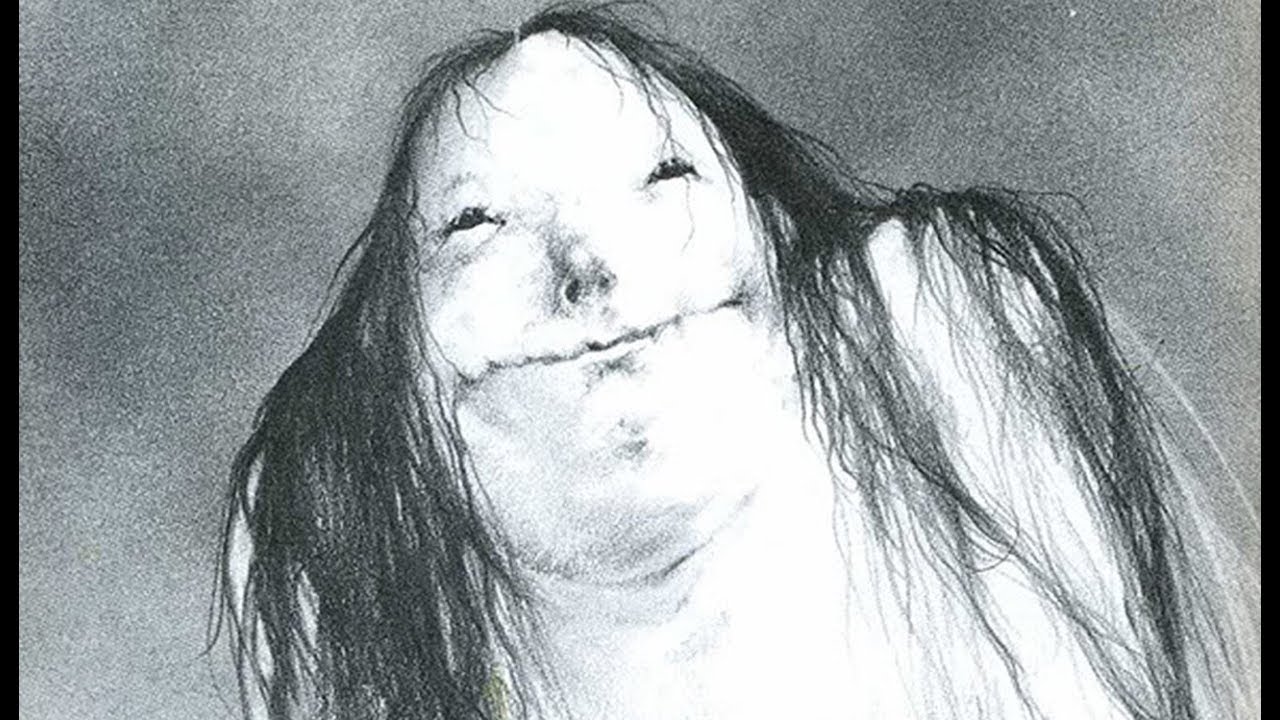 Scary Stories To Tell In The Dark was another childhood favorite that led to many long nights and many flashy nightlights (to keep the demons away, of course). Though each story was short and succinct, Schwartz’s prose and Gammell’s deeply unsettling illustrations proved to be the perfect recipe in creating the most memorable monsters.

One of those being The Pale Woman from the short story, The Dream. Though in this short story she is framed as a heroine, saving the protagonist from an ill-fated end in an evil house, I couldn’t shake off the shudder that her presence in the story brought.

Made even more spine-tingling by the illustration that accompanied the pages of this short story; in a way, her appearance leaves more questions than answers: who was The Pale Woman? What was her original story, and in that same breath, what led to the existence in which she now haunts?

The Thing (Who Goes There? by John W. Jr Campbell) 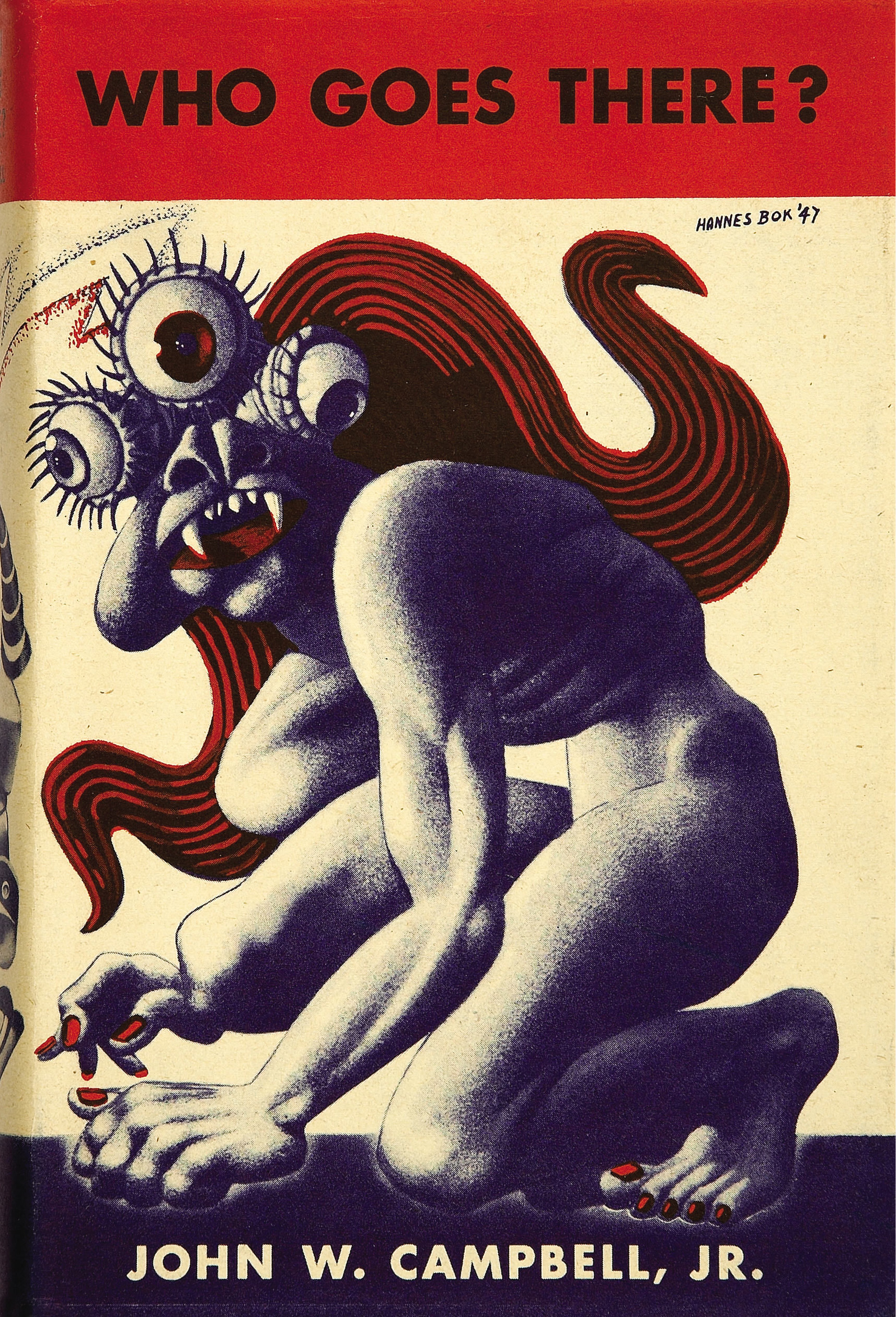 There’s a reason that this novella became eventually adapted into John Carpenter’s blockbuster sci-fi horror The Thing. The extraterrestrial beast that haunts the residents of an Antarctic research camp is terrifying beyond belief. But not simply because of the way it gruesomely shapeshifts into the victim of its choosing, and not simply because of how ancient and deeply intelligent it is.

But because of the greater danger it creates in forcing the reader— and the Arctic researchers — to doubt their self-perception and in essence, their very reality. How scary must it be, to not know whether to trust your closest comrades — or even yourself? The Thing of Who Goes There? wins the prize for most disturbing cosmic horror I’ve seen on both page and screen.

“Cthulhu” ( The Ballad of Black Tom by Victor Lavalle): 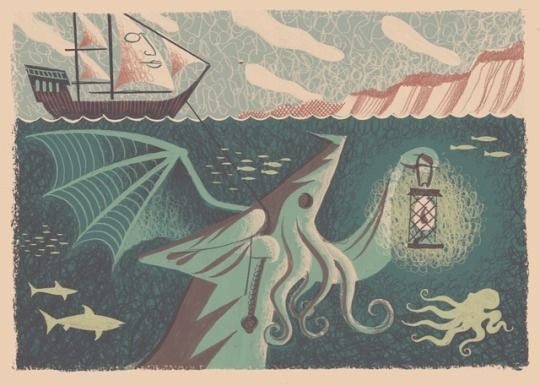 Yes, I’m well aware that Cthulhu is a distinctly Lovecraftian creation—but being that H.P. Lovecraft was unfortunately a bigoted racist with incredibly harmful ideals, I decided to include a version of his titular character that’s been interpreted through the lens of an author of color.

Victor’s Lavalle’s novella The Ballad of Black Tom beautifully subverts the racism of Lovecraft’s The Horror At Red Hook by exploring the mythos of the Elder Gods through the people Lovecraft’s short story originally demonized. Rather than dancing away from the racist implications of the original short story, Lavalle masterfully confronts the xenophobia head-on, which adds a new dimension to the dark magic and disturbing eldritch abominations that are eventually uncovered. In a way, the horror of Cthulhu in this story embodies sort of a double meaning; fear of the monsters you can’t even conceive—and fear of the monsters hiding right under your nose.

Another book that explores Lovecraftian-inspired mythos, The Dutchman’s Creek of The Fisherman by John Langan serves as not only a portal to otherwordly beasts, but as a story within a story, spinning an interwoven tale of grief, darkness, and the beasts that are birthed from inconceivable loss.

A poignant read made terrifying by how small it makes you feel in the grand scheme of things, and how powerless the characters become against the vastness of the oceanic horror swimming just underneath the surface of their beloved fishing spot.

The House on Ash Tree Lane (House of Leaves by Mark Z. Danielewski) 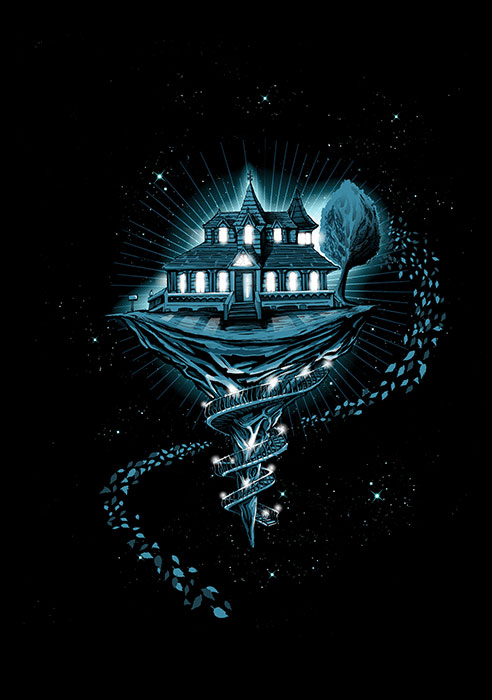 Another example in which the monster is more a place than a beast, The House in Mark Z. Danielewski’s House of Leaves is nevertheless a frightening behemoth that is almost eldritch in its manifestation. The House on Ash Tree Lane is a dizzying labyrinth of shapeshifting magic, dark secrets, and a deep-seated horror that drives anyone unlucky enough to become entrapped in it mad.

Like with Pennywise, the subtle horrors of The House on Ash Lane is what allows its horror to jump out with such power. Many times while reading I had to pause and ask myself whether the terrors being experienced by the protagonist were in fact supernatural in quality — or the result of a man reaching the breaking point of his sanity. A thoroughly chilling beast that haunts the imagination for a long time.

Did we miss one of your favorites? Talk monsters to us in the comments.