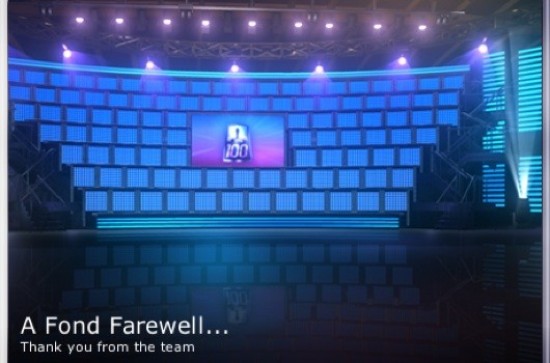 Thus ends an era in multiplayer gaming: 1 vs. 100, the beloved XBox Live trivia game in which more than 100,000 players routinely participated at once, has been canceled by Microsoft.

A general manager at Microsoft Game Studios confirms the news to Kotaku:

When we started on this journey, we knew we were creating an entirely new genre of entertainment that would be a continually evolving concept,” said Dave McCarthy, General Manager, Microsoft Game Studios. “We’re very proud of the ‘1 vs 100′ team and their accomplishments, and are excited to apply what we’ve learned to future programming.”

Judging by the comments sections on every gaming site we’ve read about the news, the gamer reaction against Microsoft’s move has been overwhelmingly negative. Some are speculating that Microsoft killed the free game off because its upkeep was expensive and because they’ll want players to pay up in whatever future iterations of the game and its technology arise. What’s especially frustrating here is that 1 vs. 100 could have been a great fit for the Kinect (which, presumably, has something to do with the ‘future programming’ McCarthy mentions) and for the casual audience Microsoft is trying to reach out to. We’ll see what rises from 1v100‘s ashes, but given the love and devotion inspired by its predecessor, it’ll have a tough act to follow.