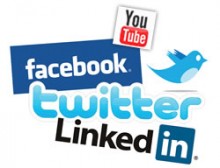 A recent survey by Jobvite suggests that 16% of Americans (or about 1 in 6) who are looking for another job found their most recent one via social media. That amounts to somewhere around 22 million Americans who found their last job not only online (which isn’t too suprising nowadays) but on an actual social networking site.

You might immediately think “Oh, of course, that’s what LinkedIn is for,” but actually, the majority of these lucky job-finders attribute their employment to Facebook. 78% percent of them, in fact. Twitter comes in next at 42% and LinkedIn just behind at 40% even. Obviously, those surveyed were not required to pick one network exclusively.

This is up from last year’s 11% and we can only assume that it’ll go up further as more prospective employees take to the social network “streets” to look for work and more employers start upping their social network hiring presence. In fact, both are starting to happen already. BranchOut, a company devoted to “Career Networking on Facebook” has released some tools to help turn Facebook into an application queue. Additionally, Jobvite, Monster, and Work4 Labs have all introduced mechanisms through which big companies can advertise their openings via everyone’s favorite social media behemoth.

A lot of this is due to the fact that, about a year ago, Facebook made job information on user profiles publicly visible by default, spurring plenty of users to change the field so it didn’t list the McDonald’s job they had 4 years ago in high-school. This made Facebook a bit more of a force to be reckoned with at least from LinkedIn’s perspective, since Facebook’s community is already gigantic and now it’s started encroaching on the whole “job” space.

Whatever the case, if you’re looking for a job, you should probably keep a close eye on your social media networks and maybe even be proactive about looking; it’s not taboo anymore, apparently. And if you’re looking for employees to fill a spot, there’s no shame in Facebooking it. After all, that’s where all the unemployed people are hanging out, right?