Review: Not Exactly Sci-Fi, Z for Zachariah Is a Slow but Insightful Film 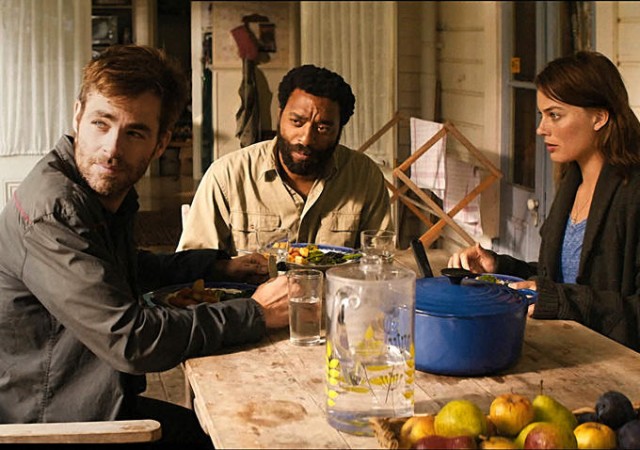 There is a reason a lot of the seemingly monthly religious movies aren’t reviewed by a majority of critics. It isn’t that they are poorly made movies—although A LOT of them are—it’s the fact that they make it very clear that they’re not meant to be consumed as popular entertainment by the widest possible audiences.

Most are marketed purely to religious organizations and suggested as possible church outings. Just this past weekend, we had War Room, which was advertised as having group rates. Many do well their first week (War Room was number two at the box office) by marketing their films this way. What’s unfortunate, however, is while a lot of these movies are marketed and made to appeal to specific religious groups, using popular entertainment to openly explore religious conversations and debate rarely will have the same success rate. One of the best shows on TV right now, Rectify, is one of the most thoughtful shows about religion and faith, and it barely has an audience. Likewise, Z for Zachariah, which is interested in this kind of debate, hid the religious aspects of its story in trailers, likely out of concern that it would ultimately keep audiences away.

That’s too bad, because in Z for Zachariah, the question of science vs. religion is by far the most interesting theme the movie touches on and could have stood to have even more conversations. Ann (Margot Robbie) is a farm girl whose land has been spared for unknown reasons from the radioactive apocalypse. As everyone else died of exposure, her land somehow survived. Devoted to her faith (and a daughter of a preacher), Anne believes she should thank God for this mixed blessing; she’s safe, but alone. But new arrival John (Chiwetel Ejiofor) is a scientist and believes there has to be a scientific explanation. The devout Ann and scientific John consider building a life together, but a few road blocks appear to stand in their way. John wants to use the wood from her family church to build a water wheel to create electricity.

And then they meet a third survivor, Caleb, who appears to be a believer like Ann and is seen as a romantic threat to John.

The movie isn’t really a science fiction film. We have no explanation or backstory for what happened, which is understandable because the film never discounts the religious possibilities, either. And for a post-apocalyptic drama, this movie lacks imagery of “destruction.” Much like TV’s Last Man on Earth, this movie takes a prettier look at the end of the world and settles into the bare essential of this kind of survival: be alone forever or take the people you can get. While that show takes the comedic approach and asks the fundamental question: “What if one of the last people on earth wasn’t a very good person?” Z for Zachariah is extremely dramatic (about three laughs the entire film) and interested in questions of science vs. religion and where those beliefs belong in a world this far gone.

Do you give up your beliefs and stick to only the facts or dig in and cling to your beliefs even harder? When the movie dances around those questions, specifically between Ann and John, the film is a really, really interesting and thoughtful movie, and there are conversations with Caleb about his faith (which may or may not be in earnest) that make the movie a compelling watch that has nothing to do with a love triangle.

But there’s a tendency to dance around the questions rather than embrace them and really allow the characters to debate big ideas. It’s understandable and doesn’t detract from the film, but feels a bit like its holding itself back from greatness. And that’s too bad, because the movie really does have rich elements: primarily—unsurprising with what is essentially a post-apocalyptic chamber piece—the acting.

Robbie’s a bit old for a character who is referenced as being considerably younger than the men (I understand in the original story she was written as 16), so her lack of experience is a bit odd and their comments about her being a girl are strange. But Robbie has a surprisingly earthy, angelic quality as Ann, is very easy to connect to right from the beginning, and commits totally to Ann’s complete devotion. Pine’s is good as a character who appears to be menacing with questionable motives (which may or may not be justifiable) and adds real tension to what is a pretty slow and quiet movie. And what can be said about Ejiofor except he’s really one of the best actors working right now? He’s great in this movie and has the deepest and most conflicted performance. In fact, if there’s any problem with these three actors, it might be that Ejiofor is just a level or two better than Pine and Robbie, and that throws the balance of this triangle off, but only slightly.

Compliance writer-director Craig Zobel directed this film, and compared to that movie’s sterile, ugly visuals that made you want to look away, this movie really embraces the natural beauty and open nature. From a radioactive waterfall to clouds snaking around a mountain, carrying the deadly radiation, the stark contrast between the movie’s visual beauty and depressing ideas is pretty remarkable and leaves a strong, haunting impression. I’ll be honest, however, that the non-commitment of the major theme in the script, missing the opportunity for some meaty conversations feels like the fault of not having Zobel write the script and giving those duties to Nissar Modi. He’s a good writer with strong sense for his characters, but lacking that something to really elevate story.

But I still highly recommend this movie as a well-made, intimate film, but also because I absolutely feel there should be movies like this that have the debates we really don’t see in commercial films. And this movie, although it could have gone further, handles these questions so well because they allow the characters to express themselves and openly debated with a sense of respect and curiosity about others’ perspectives. Z for Zachariah is great as a movie to raise and explore these ideas, even if it could have been a little more.