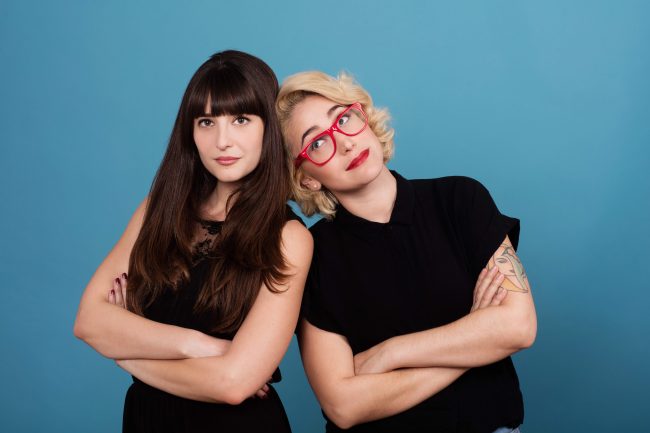 Gaby Dunn and Allison Raskin met in Los Angeles over a series of open mics. A pseudo-dating scenario, several creative projects, one hit YouTube channel and more than 750,000 subscribers later, these talented and prolific creators have not only become best friends, but they have a New York Times Bestselling book on their hands in their YA novel, I Hate Everyone But You.

In I Hate Everyone But You, besties Ava Helmer and Gen Goldman are embarking on their first major adventure without each other: Gen is off to college on the East Coast, while Ava is going to college in California. Through texts and emails they stay in close touch, keeping each other apprised of their goings-on and clinging to each other as tightly as their phones will allow.

While Gen and Ava have been best friends since they were kids, Dunn and Raskin didn’t meet until their mid-twenties.

Raskin is grateful for that, as she believes that the friends we make as adults are better suited to us than the ones we’re thrown together with by circumstance, like school. She’d advise young people to not assume that the friends they make in high school will be the only close friends they have. “You might not meet your best friend until you’re in your twenties or thirties,” she says. “You never know when you’re going to click with somebody.”

Dunn certainly wasn’t expecting to meet her best friend when she first moved to Los Angeles. She admits that she totally thought Raskin was cute when she first met her, but she was also impressed by the way that Raskin not only followed up with her continually to nurture the friendship, but also genuinely cared about others, especially in as notoriously a superficial a city as L.A.

“She would also ask a lot of questions, which I wasn’t used to,” Dunn explains. “Especially in entertainment, it was rare to have someone be like How do you feel about that? or Tell me more! And I was always kind of like, What’s her angle? I remember once I was walking her back to her apartment, and I was like I’m sort of interested in this girl. I could probably make some kind of move, or talk to her about it. Or I could just not, and let it be a friendship, because I don’t know what that’s like. And so I just decided to be friends with her, and then it was more long-term.

“Later on, she said something like Well, you never had a crush on me! And I was like, You’re an idiot.”

When I asked Raskin what made her realize she needed to be Dunn’s friend, she joked, “Is it wrong if I say desperation?”

She believes that she and Dunn were both at a moment in their lives when they were both open to making close friends. These days, while Raskin is always open to making new friends, she doesn’t need to make a close friend right now. But, she says, “I think we were both in a place where we kind of needed each other. I was definitely the pursuer, and then she was open to it. Mostly because she thought we were dating, and then because she wanted to be my friend.”

Both Raskin and Dunn consider themselves storytellers, and so despite the fact that they are known for their non-fiction writing and YouTube videos, telling a quality story is the thing that matters most. 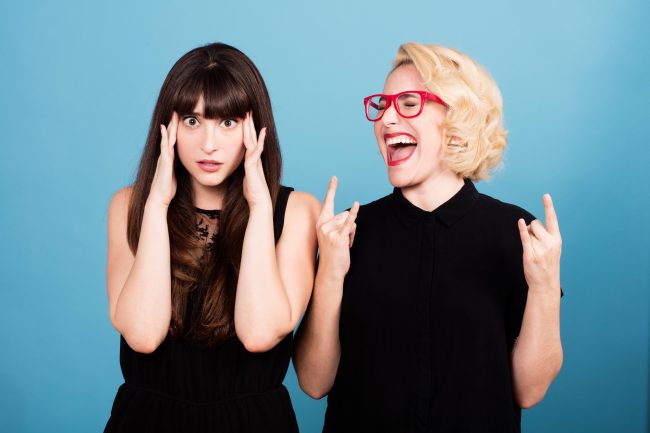 Dunn has always wanted to write a book. In fact, before selling I Hate Everyone But You with Raskin, she’d had 13 previous book proposals rejected. So, when she finally got the opportunity to do this, she saw it as not only the achievement of a long-time goal, but as an opportunity to do something important.

“We didn’t want to do something frivolous,” Dunn says. “We wanted there to be a substantial story to it. And to make a difference too, right? Because young people are so hungry for representation and content. They’re smart and if they love a novel, that’ll stay with them for a long time and can make a real impression on their lives and how they behave. At least, it did for me. So, we thought if we can help with mental health depiction, if we can help with LGBT community depiction in fiction, where it really sticks with young people, then we definitely should.”

For Raskin, selling this book gave them the opportunity to create a story that would actually exist in the world, unlike the other mediums in which they are trying to work. “In TV, we’ve had development deal, development deal, but nothing actually gets made,” Raskin explains. “But then with a novel, it’s amazing, because you know the moment you sell it, you know that that thing will be real and will exist in the world.”

Raskin describes their writing process on this epistolary novel, saying “We sat next to each other the whole time, and I typed the whole thing while Gaby pointed out my spelling mistakes.” College was the perfect setting for their characters, as it provided the first opportunity for two best friends to be separated for a long period of time.

“You’re thrown into this completely new world where you’re an adult, but not really,” Raskin says. “There’s so much pressure to have the time of your life. Which for me, was not the case, and I’m very glad I’m not in college anymore. But it’s this interesting thing where everybody glorifies it as like Oh wow, what a great time. And I sort of wanted to write a book where that wasn’t true.”

Dunn says that the character of Gen in the book, the one based on her, is very much the way she was when she was a college freshman. Gen, like Dunn, went to a “very gay” East Coast school (Emerson), came from an alcoholic home that she desperately wanted to get away from, and came out as bisexual while away at school. Dunn also says that Gen is exactly as self-righteous, ambitious, and impulsive as she was when she was eighteen.

“A criticism we get is that they’re ‘not very likable,'” Dunn explains. “And it’s like yeah, of course. Have you met an eighteen year old? I was the worst!”

One of the most important things to Dunn is that she hopes the book contributes to the normalization of things like dealing with mental health issues like self-harm and being miserable at school, two things that Ava goes through in the book. She also wants people with fluid sexualities to be normalized.

One say she and Raskin tried to do this is through Alex, a trans man, and the main love interest for Gen in the novel. She and Raskin hired several trans consultants to make sure that Alex was written well, and written respectfully

“Just having a trans love interest that Gen is, like, obsessed with and like really pursues…?” Dunn says, excitedly. “When I brought up the character of Alex to someone once, they told me An eighteen year old doesn’t know enough to transition. And I was like Oh, you are so wrong. You couldn’t be more wrong. So, I wanted to have a character like that too, who’s desired. It was so cool to me to be on the New York Times Bestseller list with a book with a main character who is bisexual and her primary love interest who’s a trans man.”

And a best friend who calls her on her shit in all the best ways.

I Hate Everyone But You is available wherever books are sold.