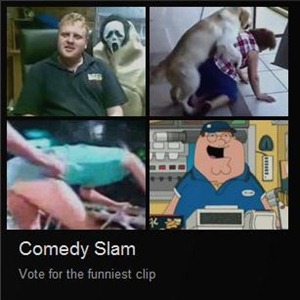 If you needed a new way to ingest YouTube content, you’re in luck, because YouTube Slam is on the way. YouTube Slam is a nifty little half-gimmick, half-game that aims to let users vote on potentially viral clips, skyrocketing the winners to their 15 seconds of fame on the leaderboard. Of course, there’s a little bit more to it than that. By voting on one clip over the other, you’re also sort of betting on it, and you stand to gain in the long run if you picked correctly. Gain what? Internet points, of course, that you can lord over your friends and family.

The content you see in a session of Slam isn’t entirely randomized, and instead is classified into one of five nifty channels: Comedy, cute, music, bizarre, and dance. Obviously, this is a neat gimmick to get you to watch more YouTube videos, and a fine way for you to waste some time, but YouTube stands to gain a lot from monitoring your predictions. You won’t see anything about it on the official YouTube blog post, but I’d be willing to bet my left hand that all this data is being fed into some kind of grinder with the ultimate goal of perfecting a viral video prediction algorithm. There’s nothing particularly nefarious about that, but an effective algorithm like that would be well worth its weight in gold plus the weight of something really heavy, like an elephant. Keep that in mind if you decide to play. Moreover, keep in mind that you’re wasting your life for Internet points. But that’s not that big of a deal, right?