Why Your Life Needs More of The Adventure Zone 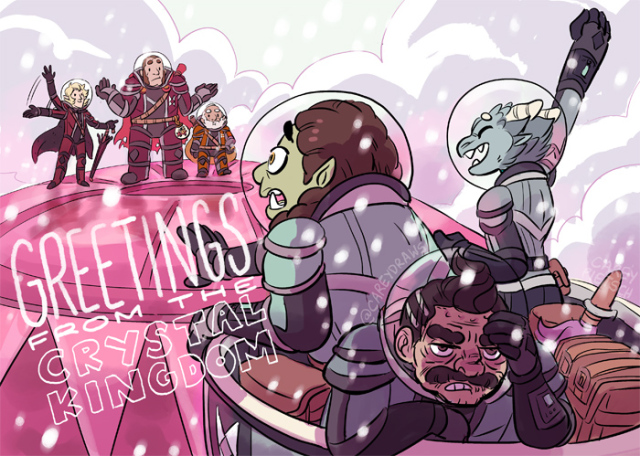 View the original here
All art for this essay was kindly provided by Carey Pietsch, and is reprinted with permission.
Check out her amazing portfolio at careydraws.com

Three idiots, nee adventurers, walk into a tavern and accept a quest that promises untold amounts of fortune, glory, and definitely not any betrayal or untimely death. It goes real bad. Thus begins The Adventure Zone, a comedy D&D podcast that thoroughly won the heart of this total tabletop newbie. I wrote about this show almost a year ago, when the show was barely dipping its toes into a bigger conspiracy. I’m happy to report that since then the show has surpassed every expectation of its charming but lowkey start and created a world and cast that you not only want to root for but might find your heart broken by on more than one occasion. And with the podcast’s hosting network, Maximum Fun, currently hosting their fund drive to draw in new listeners, it seemed like it was well past time to give this wonderful show a full write-up.

There’s a good chance that, if you listen to many podcasts, you’ve come across the hosts of The Adventure Zone before: brothers Griffin, Justin, and Travis McElroy are the hosts of longtime advice podcast My Brother, My Brother, and Me; and in the years since they’ve come to rival Kevin Smith for sheer quantity and variety of audio entertainment produced (at current count, my podcast feed includes eight shows featuring at least one McElroy sibling, and that’s not an exhaustive list). Griffin and Justin are also prominent staff members at Polygon, meaning anyone looking for video game coverage is likely to have come across their names once or twice (and, hopefully, visited the Monster Factory). But WAIT? A fan of the Maximum Fun network’s non-front facing McElroy shows? You still have likely met Travis, who has an absolutely boggling number of producer credits. 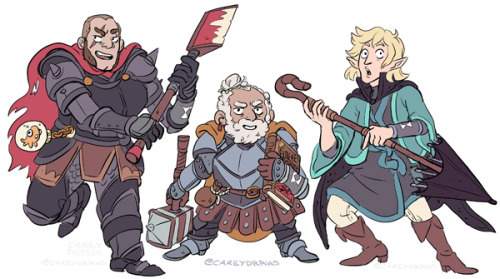 All of that is to say that The Adventure Zone very much came from a place of “three dudes we already know and like are now going to play a D&D game with their dad” and grew from there (it was originally a pilot of sorts on MBMBaM, and was given its own run when the response was positive), rather than wanting to introduce a new narrative IP to an audience that would be buying in first for the characters and not the players. That loose style, even if you’re not familiar with the hosts, ends up serving the show well. The first episode (originally two hours, with a one hour supercut added later for fans wanting to jump straight into the plot) offers a smart mix of experience with D&D (in the form of DM Griffin) and total bafflement so that listeners of many experience levels can feel at home. The setup obeys the basic rules of D&D–checks for out-of-combat actions, stats for combat–but is always more interested in telling an entertaining story than toeing the line of the rule book. And that’s nothing but good for the flow of the story.

Even more importantly, while the guys are happy to take jabs at one another or let their characters act like jerks now and again, they respect the rules of their story right from the get-go. For example, Justin might have his elven mage Taako (yes, exactly why you’re thinking) steal everything that’s not nailed down, but there’s never any danger that a player will shrug their hands and say AND THEN A 420 DRAGON CAME DOWN AND ALL THE ENEMIES GOT BLAZED, DAY SAVED; a joke is never more important than an internally consistent narrative, and it fosters a lot of trust in Griffin’s skills as DM, and our willingness in turn to keep track of the plot.

The first three arcs, detailing the initial quest, a moon-base conspiracy, and an Agatha Christie-style murder mystery on a train, are all solid pieces of entertainment; they contribute well-written, likable NPCs and interesting bits of ominous foreshadowing connected to the arc-based MacGuffins. But it wasn’t until the show’s fourth arc, “Petals to the Metal,” that it slammed its cards down on the table as a can’t-miss show. Almost twice as long as any of the stories that came before it, “Petals” has a little bit of everything: a serious threat for our heroes to first bumble through and then rise to the occasion of, glimpses into a larger world that don’t distract from the ongoing plot, a super cool car chase that would make Fury Road proud, and an extended opportunity for Griffin to show off that while all the players might be dudes, he does one hell of a job at writing diverse, complex, interesting women into these stories.

Hurley and Sloane are worth the price of admission all by themselves, rich with history and personality that you can practically see expanding outside the limits of the quest at hand. The length of the arc gives Hurley in particular a chance to become a fourth protagonist alongside the actual player characters, and the climax of the story is affecting in a way most people would no doubt save for the likes of medium standard-bearer Welcome to Night Vale. 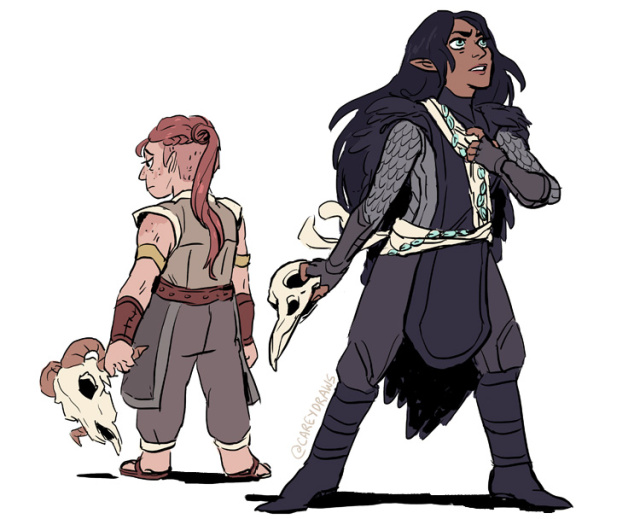 Since then the show has only continued to challenge itself to improve–recent arcs have taken a particular eye to the worldbuilding element, there’s now an extra layer of post-production in the form of music and vocal effects for some of the more threatening NPCs, and the writing continues to strive to be inclusive. The love Griffin clearly feels for this world as the writer and DM comes through palpably as the story goes on, and every element has stepped up in response. Even our hapless heroes are beginning to warm into who their characters are outside of being an extension of themselves (special props to Justin, who found not only a distinct character for Taako but also a voice early on). While it might have started as “Justin, Travis, and Papa Clint wandering around a fantasy world,” the show has definitely graduated to placing our investment in Taako, Magnus, and Merle, and all the people around them. Not bad for a one-off goof.

Vrai is a queer author and pop culture blogger; they’re team Sweet Flips for life. You can read more essays and find out about their fiction at Fashionable Tinfoil Accessories, support their work via Patreon or PayPal, or remind them of the existence of Tweets.