I Watched Xploration Outer Space, and It Gave Me Feminist and Space Feels

Those are the best feels you can get. 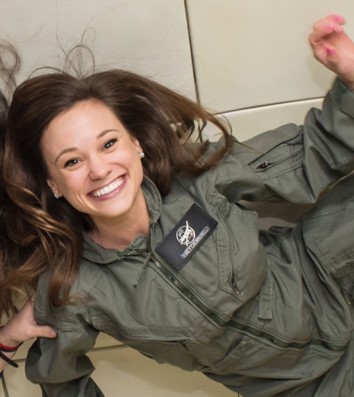 Even though I am late to the table when it comes to Xploration Outer Space, a show that started airing about a year ago, but when I saw it was a show about science and engineering hosted by a young woman, I remember that any time is a good time to talk about science shows.

Like many Mary Sue readers, I loved Bill Nye the Science Guy as a kid, but as I have grown older, I have wondered if that show was accidentally a big disservice to women in STEM. The show had girls and African Americans as Nye’s assistants, but I worry if that only reinforced the idea that the only role for women and minorities in STEM were as helpers to white men, not full scientists in their own right.

I’m preaching to the choir here when I write that we need more diversity in the STEM fields, and part of promoting that diversity means showing more women in science. Although there’s more visibility for STEM women than there was even five years ago, most people still imagine a white man when they’re asked to describe a scientist. I want to support women working as public faces for the STEM fields.

Which is why I wanted to check out Xploration Outer Space. The show is pretty much what it says on the tin: it covers (sometimes still-developing) space exploration tech. The show’s host, Emily Calandrelli, is herself a scientist and known for her well-received TedTalk, “I Don’t Do Math.”

I like that, in addition to discussing the future of space exploration, it makes a point of explaining recent discoveries. Scientific knowledge builds itself over time, and often, one discovery will prompt the next set of questions. The show, which is geared toward teenagers, does a good job of demonstrating why scientists and engineers are working on a particular goal, which is always based on previous discoveries. For example, part of the reason why scientists and engineers are interested in drilling down deep into Mars’s surface is because shallow drilling in Mars has not revealed any organic compounds. This episode was made before the awesome discovery of water on Mars, but it highlights how scientists and engineers use what they already know to dictate their next question.

I also liked that the show takes the audience to places where science and engineering really happens. For example, it profiles a space suit engineer. Most people might assume that spacesuits are a one-size-fits-most deal, but in reality, they’re fitted to the astronaut’s body. I liked that the show gave the audience close-ups of the details, like the water tubes that keep an astronaut cool while in their spacesuit.

This show is geared for teens who might not know much about space exploration, so some of these things will be familiar to anyone who follows space news, like the Vomit Comet and the Mars Society Desert Research Facility, which are well-known to people interested in space exploration, but not necessarily a household name. But even though some of this isn’t exactly news, per se, the show highlights that for any research goal there are lots of scientists and engineers approaching the problem from a variety of perspectives. Astronauts are not the only ones who make exploration possible; many smart people from many fields contribute to every mission.

The one thing that I have mixed feelings about the episodes I watched is that the show never mentions the lack of women in the STEM fields, although about half of the scientists profiled on the show are women. On one hand, it is nice that Calandrelli might not feel pressured to address gender, and there is a part of me that wishes that STEM fields were already like this, where gender was a non-issue. But of course, part of the problem is that it’s an issue that frequently gets erased or swept under the carpet. The lack of women already in STEM fields really does affect whether women ever enter them in the first place and whether they choose to stay. If there are any episodes in the future, I would like to see them tackle this, even if it’s not strictly about space exploration.