Get Legendary with Xena: Warrior Princess #1 | The Mary Sue

Get Legendary with Xena: Warrior Princess #1 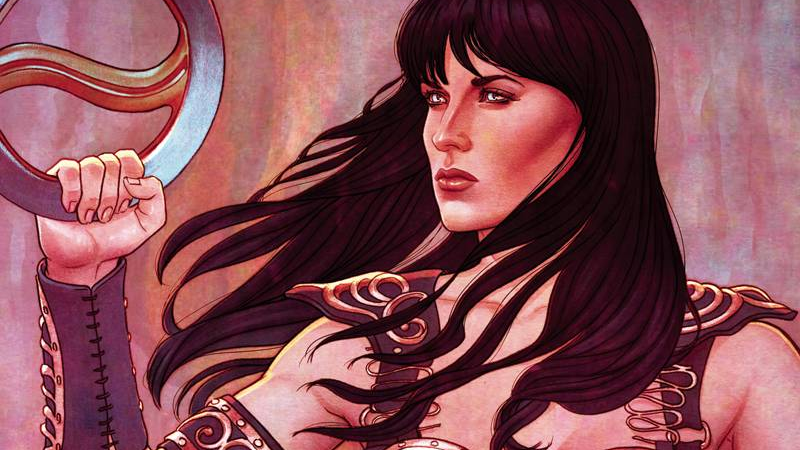 Growing up, I remember looking forward to going to the babysitter’s after school, for she would turn on Xena: Warrior Princess, and I could watch monster slayage to my little heart’s content. I was too young to grasp the overarching plot or character developments, but I knew that Xena and her bestie Gabrielle got to go on adventures and beat up baddies on the reg, and if they could be that awesome, well, so could I. It’s almost twenty years later, and adult-me is super pumped for their return in this new comic series from Dynamite. 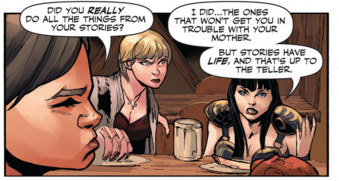 Xena and Gabrielle have been out of the world for a time, having defeated the gods in a great and terrible battle. Their path ahead should be clear, but it seems that men can be as devious as the gods themselves. Rome spreads misinformation across the countryside, sowing seeds of fear and mistrust among the populace. Our heroines face a battle that cannot be won by the sword or the chakram alone. 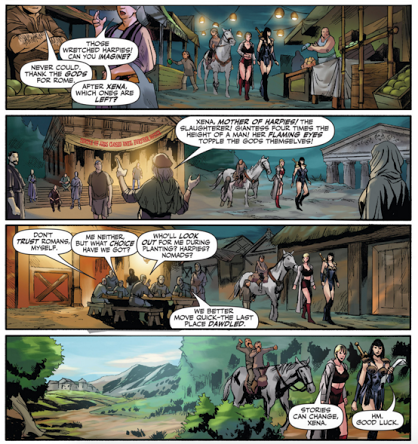 In a first issue of a new series, I would have expected a less complicated introduction for people (like me!) who haven’t recently watched the TV show, but I suspect longtime fans will find the sequel they’re looking for here. Genevieve Valentine (writer of Catwoman and several fantasy novels, including The Kingfisher Club!) and Ariel Mendel do a great job of capturing the voices and attitudes of Xena and Gabrielle, and the second page of the book alone has me counting the days until the next issue drops.

Like most of my weekly comics, I read this in comiXology’s Guided View mode, which minimizes my bad habit of glancing ahead to the bottom of the comic page and maximizes my concentration on each panel, adding extra oomph to the more dramatic pages. There’s this one double page where Xena is lost in a memory that turned downright cinematic in this mode. [Note: Kara is the co-host of ComiXology’s podcast.]

Dynamite has recently re-launched many of their popular comics starring women with new creative teams and more wearable costumes to appeal to a broader audience, and it’s exciting to think that Xena is part of this refined creative direction. Comics don’t have the budgetary constraints of filmed media in terms of special effects, so I look forward to many fantastic creatures and mythological beings crossing paths with Xena in the coming months. I also look with hope at the possibility that this comic series will explore the relationship between Xena and Gabrielle in a way the show did not or could not. In the meantime, I’ll just be brushing up on my Xena warrior cry. Alalaes, alalalalalalalala!

Kara “KZam” Szamborski co-hosts the weekly comiXologist podcast (available on iTunes or SoundCloud) to help you find your new favorite comic to read. She gushes about comics and smashes the patriarchy on Twitter as @KaraSzam.