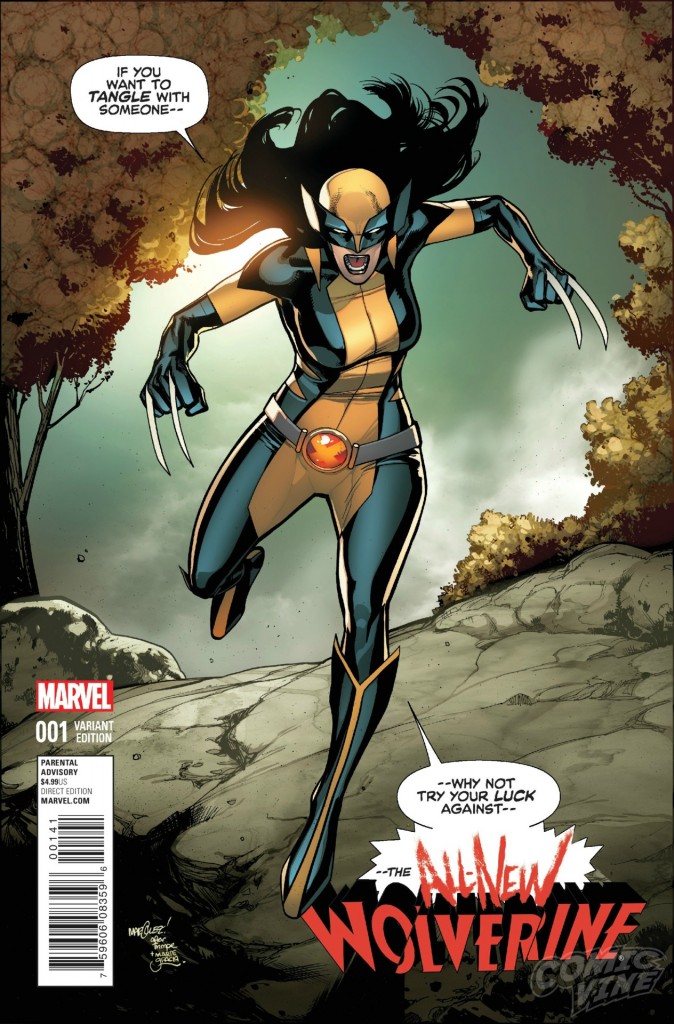 Doesn’t Laura Kinney look awesome in that black winged mask? In case you hadn’t heard, Laura — a.k.a. X-23, the female clone of Wolverine — will be taking up his mantle in a new series called All-New Wolverine, and the first issue’s out on November 11th. You can read a brief preview over at Comic Vine; Tom Taylor’s the writer, with David Lopez and David Navarrot illustrating.

For those of you who’ve never read much X-23, All-New Wolverine doesn’t seem like a bad place to start — but if you want to dig back and check out some of her past stories, I highly recommend Marjorie Liu and Will Conrad’s arc. Start out with The Killing Dream: Volume 1. It’ll drop you right into the action with very little explanation, but it also includes some helpful flashbacks and explanations of Laura’s past so that you can get up to speed — but all you really need to know is that she was made in a lab from the genetic material of Wolverine and of Dr. Sarah Kinney. It’s a classic “waif built to kill” storyline, but Marjorie Liu’s writing and Will Conrad’s intense illustrations make the tired trope work as well as it ever could.

Anyway, here’s an explanation of her upcoming story-line in All-New Wolverine:

X-23 was created to be a weapon and for a time, that’s all she was. But with the help of her mentor, LOGAN-the original WOLVERINE-she escaped that dark past. Tragically, Logan has fallen, but Laura will continue in his footsteps as a hero. Recent events have her doing everything in her power to keep those around her alive, as violent forces are hell-bent on mutual destruction. If anyone can stop them, it’s Laura. She is the best there is at what she does. She is THE ALL-NEW WOLVERINE.

I’ve loved X-23 ever since she first got introduced, so I’m very excited about this. She’s grown up and come to terms with her past and her powers, and she deserves a book that’s worthy of her. I really hope this is it!

One more related sidebar — it always bugged me that in Marvel vs. Capcom, X-23 says she’s the “second-best” at what she does. Clearly a joke on the part of some writer somewhere, but COME ON, man! Anyway, now she can finally say, “I’m the best at what I do,” because damn right she is.