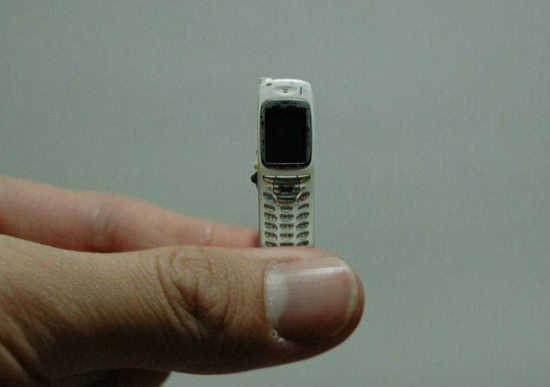 Still waiting on a completely contained cell phone that’s small enough to wear as an earring?  That’s because while most electronic components are getting smaller every day, batteries have remained the exception.  Ever looked at the size of your laptop battery in comparison to its other components?

Enterprising scientists have been addressing this problem, most recently by making a battery that is smaller that the width of your pinky nail and can only be viewed in action with a electron microscope.

The tiny rechargeable, lithium-based battery was created by a team led by Sandia National Laboratories researcher Jianyu Huang. It consists of a bulk lithium cobalt cathode three millimeters long, an ionic liquid electrolyte, and has as its anode a single tin oxide (Sn02) nanowire 10 nanometers long and 100 nanometers in diameter – that’s one seven-thousandth the thickness of a human hair.

It was necessary to get such a good look at the battery that lithium ions could be observed traveling through it because its nanowire anode behaves differently than other materials in the same conditions.  Nanowire can “offer the potential for significant improvements in power and energy density over bulk electrodes.”

Unfortunately, watching a nanowire on the atomic scale has not previously been possible, due to the conditions of vacuum required by electron microscopes.  Researchers got around this by suspending the battery in molten salt.

Huang’s findings can be found (with subscription) here.