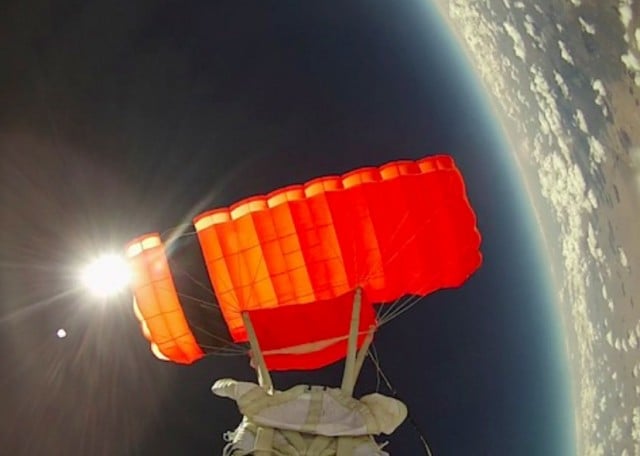 World View Enterprises would like to send people to the edge of Earth’s atmosphere with balloons and their special parafoil craft. They’re one step closer to that goal thanks to a recent record-setting test flight of a to-scale model of their Tycho craft.

The flight took the craft to 120,000 feet or about midway into the stratosphere, and about one tenth the altitude of the International Space Station. You can see the curvature of the Earth against the background of space from that height, but you’re not really in space just yet. Still, that’s impressively high. Felix Baumgartner reached a height of 127,851 feet back in 2012 when he jumped to sell energy drinks.

After peaking at that height, the craft moved down to 50,000 feet where the parafoil was deployed, allowing the craft to sail down gently back to Earth. Though the test flight didn’t include the World View capsule (or even a to-scale model of it), it’s promising for their plans to send to people to almost-but-not-really-space as early as 2016.

For $75,000 you buy a spot as a “Voyager” on the eight-person (six Voyagers, two crew members) capsule. The World View site describes the experience as:

Floating up more than 100,000 feet within the layers of the atmosphere, you will be safely and securely sailing at the very threshold of the heavens, skimming the edge of space for hours. The breathtaking view unfolds before you—our home planet suspended in the deep, beckoning cosmos. Your world view will be forever changed.