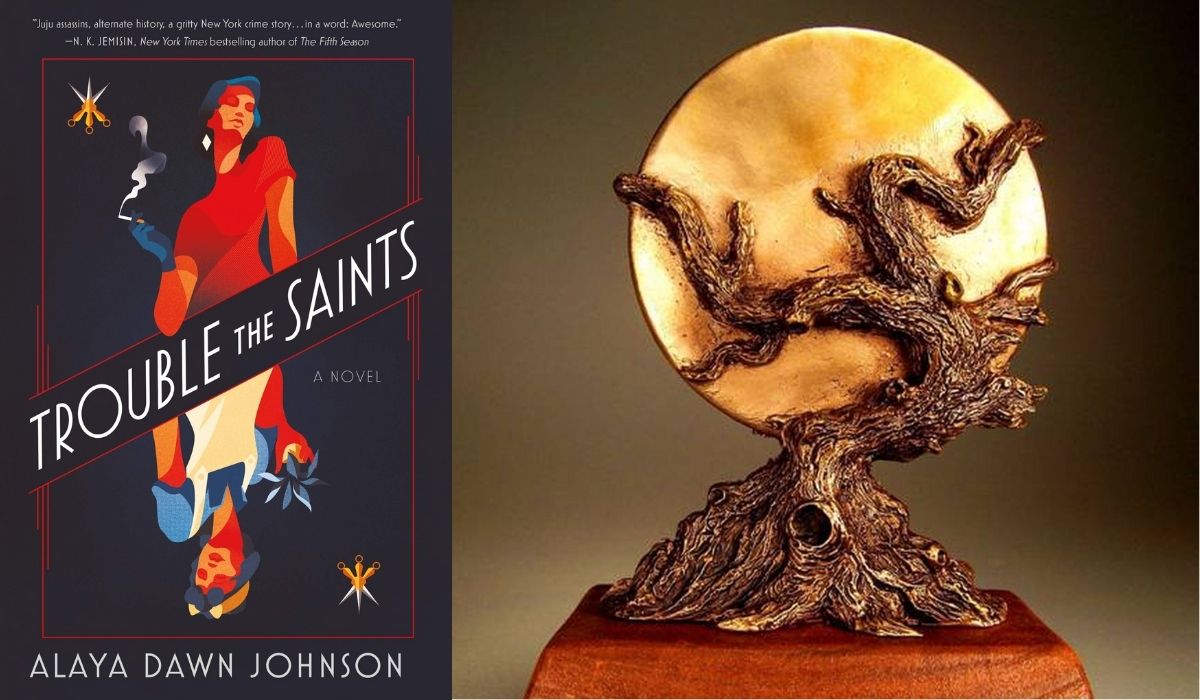 Lovers of fantasy and its sister genres, science fiction, horror, and more eagerly waited, in Montreal or online, for the winners of the 2021 World Fantasy Awards (WFA) on Sunday. Beginning in the ’70s, the recognition of a WFA is the equivalent of a Nebula, Locus, or Hugo award in these genre-specific spaces.

This year’s theme for the WFA Convention was “Fantasy, Imagination, and the Dreams of Youth.” While WFA recognizes work for adults, the theme acknowledges the sub-genres created and work done in Young Adult fiction that bridge the gap between children’s science-fiction and fantasy and adult SFF. Not only that, but YA is a genre some authors wrote in first and continue to contribute to in addition to their adult work. 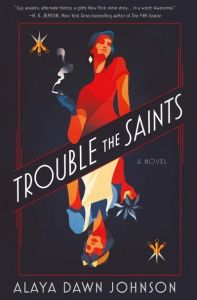 Johnson’s novel is a historical fantasy crime thriller … and more? It’s very hard to gauge based on how the winner is discussed, but obviously, the judges, Tor Books, and many readers were swept away by this book.

Pea is a gifted assassin working for a mobster on the eve of WW2 in NYC whose plans are further complicated when she finds love. The story jumps ten years into the future, where she is living a new life and has given up on all connections to her former life and dreams. However, ghosts of the past won’t let her forget who she is. This story is told from the perspective of Pea, another with a gift, and a third character.

In a review for NPR, prose and comic writer DannyLore wrote, “Put together by a masterful wordsmith, Trouble the Saints gives us a tale of how agency doesn’t always equal freedom, and solutions don’t always lead to success, with characters you desperately hope make the right choice — even when that choice doesn’t exist.” 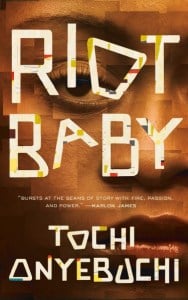 While I haven’t read Onyebuchi’s book (I’m reading War Girls right now), reviewers I trust have called this science fiction and fantasy novella a contemporary classic. One reviewer (I think it was Jess from Bowties and Books) said they see this book as a text future generations will read and discuss in schools.

Riot Baby follows Ella. Upon mounting violence and injustice that leads to the incarceration of a family member, she tries to grapple with the power to destroy that she wields in a world designed to break her.

Putting this back out there, because goddamn. Goddamn. #worldfantasy2021 https://t.co/wOoq3s6Kno

Sharing Onyebuchi’s excitement was the 2020 co-winner of the Best Novel category Fonda Lee. Lee’s Jade City (the first book in the Green Bone Trilogy that wrapped up this month) and Victor LaValle’s horror/fantasy The Changeling tied last year.

Tochi, I’m absolutely thrilled for you! And that was a STACKED novella category! CONGRATULATIONS

Whut? Did @AnnVanderMeer and I just win the World Fantasy Award for best anthology for The Big Book of Modern Fantasy?! Seriously shocked. Didn’t expect to. Soooo didn’t expect to we hadn’t even provided a thank you speech. Kinda stunned.

If the artist Rovina Cai sounds familiar to those returning to TMS, she was mentioned last week for her stunning illustrations in Darcie Little Badger’s Book Elatsoe. Her win wasn’t for that book specifically, but for her body of work published 2020-2021. In addition to illustrating books, Cai worked with Wizards of the Coast for several 2021 Magic: The Gathering sets.

Thank you. You know I don’t say much on SM, but now I’m damn near speechless.

And thanks to @CharlotteAshley, one of the writers we were so lucky to publish several times while I was at @fandsf, who was in Montreal and accepted the award on my behalf.

Congratulations to Prof. Brian Attebery, Editor of the Journal of the Fantastic in the Arts, who won the 2021 World Fantasy Award for the JFA! https://t.co/6QG49csH7S

WFA continues to adapt and grow

It wasn’t even ten years ago that writers of color like Daniel José Older and others successfully campaigned for the award itself to change to this mysterious knotted tree rather than the cartoonish bust of one of the most famous and most overly racist (antisemitic and xenophobic) writers of the 20th century, H.P. Lovecraft.

Well, the original replacement choice was the queen of Afrofuturism, Octavia Butler. However, this tree route was likely their best bet both because the logistics of depicting another person would be complicated, and awards are best devoid of relation to a single person—even one as cool, talented, and pioneering as Butler. Before I even knew the recent history of the new award, I was captivated by the current iterations’ uniqueness and beauty.

With a nearly 50-year legacy, the inclusion of marginalized voices and non “western” writers has been slow, but the last few decades of consistent nominations (and winners) of those from around the world show that despite the work never being done, the WFA and many in the fantasy community continue to recognize the work by underrepresented creatives in fantasy.

I hope in upcoming years, the judges start to reflect the winners, but including those from around the world rather than mainly the U.S., U.K., Canada, and Australia as they did this year. However, at least this year, even with the limited scope of ethnic/national experiences in the judges’ pool, they recognize talent in often overlooked spaces, which is only a strength and win for everyone.