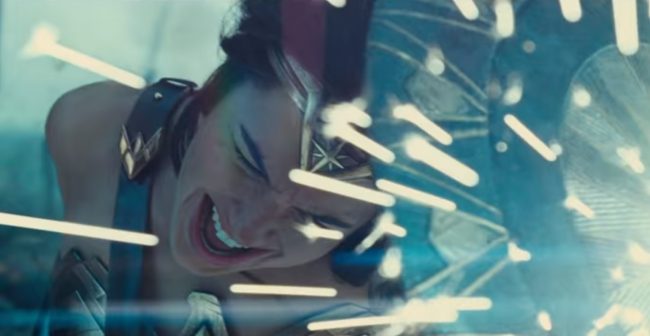 Patty Jenkins’ Wonder Woman did an amazing job at balancing huge action set-pieces with earnest heart and emotion without being cheesy or ironic. One of the clearest examples of this was the moment in which Diana first dons her ‘Wonder Woman’ armor. It’s a scene that’s already iconic, and the film just came out. Hard to believe that this entire sequence almost didn’t make the film! **SPOILERS IF YOU HAVEN’T YET SEEN THE FILM**

One of the most majestic moments of the film happens as Diana accompanies Steve Trevor and his rag-tag band of misfits to the front of WWI to try and stop a plot in which the Germans will use a poison gas designed to eat through gas masks to destroy everyone and win the war. They arrive at a field dubbed “No Man’s Land” across which the Germans and the British had been locked in a standoff for over a year. The standoff has made the lives of nearby villagers miserable as they either die from the violence, or die from starvation.

As Steve & Co. attempt to sneak around the area to get past it and continue their mission, Diana can’t bring herself to go knowing these villagers need help, and knowing that she has the power to make it happen. And so, we see that awesome shot that kept us salivating through all the trailers of Wonder Woman climbing up out of a trench to draw all the German fire by herself so that the British and French forces could cross.

It’s an amazing scene, not only because it’s all about Diana taking on her role as the hero that will become Wonder Woman for the first time, but also because it shows her not being a savior, but being a leader. Yes, she draws enemy fire to herself, but that’s so that the Triple Entente forces can get past and do their thing. Part of what makes Wonder Woman a hero is that she inspires others to do their part and be heroic, too.

For some reason, none of this registered with the higher-ups at Warner Bros, who apparently saw this entire sequence as a waste of time, thinking that she should be getting to the main bad guy, Ares, a lot faster. In an interview with Fandango, Jenkins talks about how that went down:

I think that in superhero movies, they fight other people, they fight villains. So when I started to really hunker in on the significance of No Man’s Land, there were a couple people who were deeply confused, wondering, like, ‘Well, what is she going to do? How many bullets can she fight?’ And I kept saying, ‘It’s not about that. This is a different scene than that. This is a scene about her becoming Wonder Woman.’

Thankfully, Jenkins fought really hard to keep the scene, going so far as to storyboard the entire sequence herself to show how integral it is to the story as a whole. Now, it lives as a highlight in a film full of highlights.

What was your favorite scene in Wonder Woman?