How Wonder Woman Succeeds as a Feminist Film | The Mary Sue

How Wonder Woman Succeeds as a Feminist Film 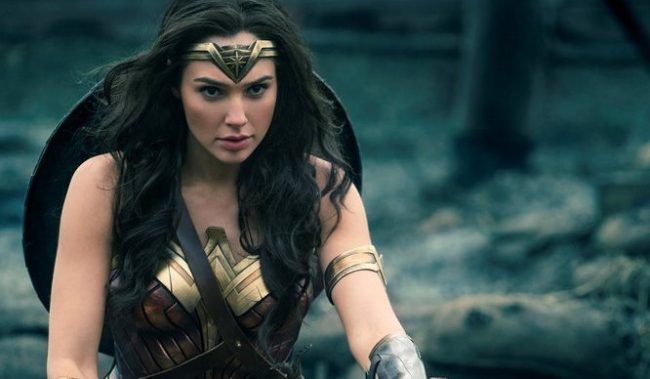 As a fangirl and a feminist, I have been waiting for a feminist superhero movie. And I don’t just mean a superhero movie starring a female hero. That alone, while a good step in terms of representation, wouldn’t make the film inherently feminist. There are some good nods towards feminism in Wonder Woman, and I have read thoughtful commentary on the ways in which it inverts classic tropes or calls attention to double standards. In my opinion, however, the best and most feminist thing about Wonder Woman is that it doesn’t just stick a female character into a male-dominated formula; it rewrites the formula itself.

Patriarchy is about dominance, which means there are winners and there are losers. It’s us vs. them. Superhero movies run on much the same premise. They are built on a model of might and conquest. The “good guys” save the world from the “bad guys” by being stronger and better. Notice that language of “good guys” and “bad guys.” No wonder these movies all star male heroes—they are built on a patriarchal model in which someone is the winner and someone else is the loser. It’s either or. There is no and. It is its rejection of this zero-sum mentality that is Wonder Woman’s most valuable contribution to the genre.

If you’ve seen the film, you are probably thinking, “it looked like a classic superhero movie to me.” And it does—for the first part. In the beginning, Steve Trevor thinks he is in a traditional, patriarchal superhero flick. That’s why he keeps talking about the Germans as the “bad guys” and why he feels the need, even as something of a rebel, to obey the “laws” of that kind of movie, awkwardly posturing that he is “above average” and that his career requires “extra virility” or chivalrously attempting to protect the girl. Thankfully, Diana helps to balance out his assumed worldview. Although her apparent naiveté about the world of men could make her come off as clueless, the effect, instead, is to make Steve’s perfectly “normal” worldview seem quaint and nonsensical. She points out that women’s clothes are impractical, that women, like Etta, are often obliged to perform a kind of servitude with a more euphemistic name. She calls out the men for preferring war to peace and for ignoring the actual people caught up in the conflict in the name of “winning.” These moments are the first hint that we are in for something different.

However, despite her apparently more enlightened state, Diana doesn’t have it all figured out either. For the vast majority of the film, she actually thinks she is in a classic superhero movie too. And who could blame her? Even her mother, Hippolyta, maintains that zero-sum mentality, demanding loyal submission from everyone, including Antiope, whom she criticizes for insubordination. She believes that, if she allows Diana to reach her potential, she will “lose” her to Ares. As a result, she tells Diana that the God-Killer is a sword, a claim she—and the audience—take at face value because we are so accustomed to phallic might winning the day. Because Diana is duped into thinking she’s in a classic patriarchal superhero flick, we, the audience, are duped too. As a result, we discover the truth along with the characters, making that truth all the more impactful when it finally hits us.

The shift in the movie begins, appropriately, when Steve and Diana begin to fall in love. It’s a pleasantly slow process for a Hollywood movie; while their chemistry is instantaneous, it takes them time to appreciate each other and to come to a mutual understanding that there is more to life than winning and losing. The first shift is when Steve is forced to recognize Diana’s power and learn to follow her lead. That begins with her epic trek across No Man’s Land. Throughout this sequence, she leads and he provides support, taking out the occasional gunner and ultimately literally turning himself into a stepping stone she can use to leverage herself to victory, as she springs from the “shield” he and his friends hold on their backs to take out the last sniper occupying the village. It’s no accident that this village is called “Veld” (field—as in playing field? as in leveling it?). As they dance in the snow, she comments on how magical the snowfall is, and Steve, for the first time, genuinely acknowledges her viewpoint, admitting, “Yeah, I guess it is, isn’t it?” When he tells her, “You did this,” giving her credit for liberating the village, she says, “We did it,” a moment some might read as a lame attempt by the writers to include the man in her feminist achievement, but one I read as acknowledgment that it’s not all a zero-sum game—that her victory doesn’t have to mean his defeat.

Steve takes a bit of a step back when he insists Diana stay put instead of storming the castle with him, but she completely ignores his instructions, and he quickly begins to run up against the limitations of his patriarchal worldview. Specifically, in a reversal of a classic trope, he finds himself obliged to seduce the nefarious Dr. Poison as he attempts to uncover the location of the toxic gas. The film intelligently acknowledges the limitations of seduction as a strategy, in that it requires the other party to cooperate, something that Dr. Poison, unlike so many of her male predecessors, refuses to do. Up against a woman who does not fit into the classic patriarchal schema for women (she is not a virgin, not a whore, not, in fact, any of the classic tropes—she’s a highly effective and completely unscrupulous chemist, who is neither beautiful nor ugly), up against such a woman, even an inversion of the classic roles doesn’t work. The roles, themselves, are revealed to be too limiting.

Towards the end of the film, Steve is forced to complicate his worldview—it’s no longer about “bad guys” and “good guys”: he acknowledges that everyone has that darkness inside them. It is significant that he hands Diana his watch as a parting gift. Having stood in for his phallus in an earlier joke as the “tiny thing” he lets “run [his] life,” his father’s watch represents his traditional, patriarchal worldview. As he hands it to Diana, he gives up letting his world be run by such a tiny thing, and he realizes that he can simultaneously win … and lose.

Everything comes to a head when Wonder Woman faces off with Ares. As Ares spouts his views on mankind, he sounds remarkably like a mouthpiece for the worldview of this incarnation of the DC universe so far: he believes that humans are dark, scary, self-defeating beings who manufacture their own ugliness. A traditionalist, he views them as a threat: they took the earth and his father’s affections from him, and now he must take that away from them. It’s a classic “me vs. them” moment. But Diana isn’t having it—not in her movie. She tells Ares that humans “are everything you say they are, but they are also so much more.” In this one simple line, she demolishes the zero-sum mentality; he is right, but she is also right. There is room for a more nuanced and complicated understanding of humanity, one that doesn’t paint too naïve or rosy a picture, but also one that doesn’t give up hope. There is room for “and.” It is at this moment that she and Ares begin to share power—she literally absorbs his lightning and is able to re-channel it—and that shared power is something that Ares, in his extreme patriarchal mindset, cannot fathom. As a result, he is obliterated by it; the representation of the patriarchy is dissolved by the introduction of a new paradigm.

At the close of the film, Diana proclaims that she used to dream about saving the world, but she has since come to understand that things are more complicated. She no longer thinks about heroes and villains, about winners and losers; instead, she chooses to believe in love. So, in the end, does Steve, whose last words in the film are “I love you.” I appreciate that they come to this understanding together; that mutuality enhances the film’s message. Diana doesn’t pretend that love can conquer the darkness; this is not a tale of “love trumps hate.” In fact, it’s not a tale of “trumping” (or “Trumping!”) at all. It’s a tale of love balancing the darkness. It is a tale of and. By rejecting the classic patriarchal constructs upon which superhero films have traditionally been built, Wonder Woman truly succeeds as a feminist film.