Wonder Woman, Doctor Poison, and Solidarity In the Face of Patriarchy 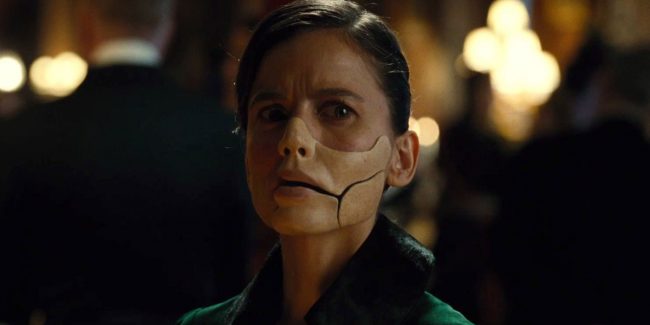 One of the things that fascinated me most about Wonder Woman was the use of DC villain, Doctor Poison, known in the film as Doctor Isabel Maru. How she is handled, and her subsequent fate tell us a lot about what Diana learns about humanity and the importance of mercy. However, can how Diana chose to deal with Doctor Maru teach us something about solidarity in the face of oppression? **SPOILERS, YO.**

The film introduces her as a clear villain. Doctor Maru (played by Elena Anaya) is a Spanish chemist recruited by Germany’s General Erich Ludendorff (with whom it’s insinuated that she might be in a more intimate relationship) to use her significant skill at developing deadly chemicals to help Germany win the war. However, while she’s clearly on the wrong side of history and a total collaborator, she seems less interested in the politics of the war (not to mention the test subjects she kills in the process) and more interested in her ideas working.

She responds gleefully when a chemical compound she creates is able to eat through a gas mask, not because she’s thinking about what it means for Germany, or even to General Ludendorff, but because it worked! She’s a scientist through and through. Granted, she’s a scientist with absolutely zero moral compass, but she’s a scientist first, and everything else second. 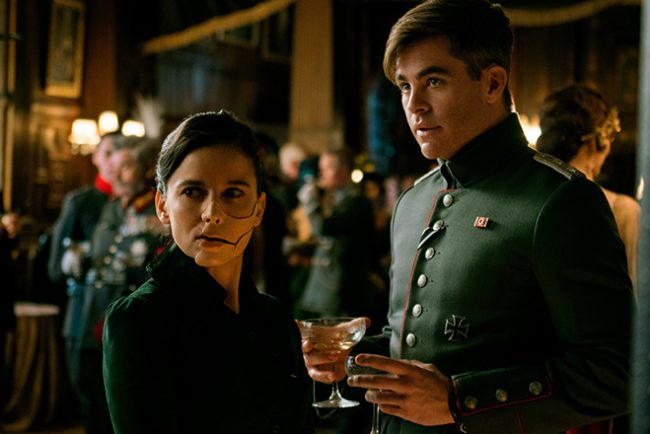 One scene that packed an unexpected emotional wallop for me was the scene at the gala in which Steve Trevor, in full spy mode, attempts to flirt with Doctor Maru in order to get information on the Germans’ plans with her poisons. His approach is genius. Rather than trying to appeal to her vanity, he appeals to her love of science. He approaches her as a fan of her work. He notices that she’s standing by the fireplace talks about how beautiful he thinks fire is, describing it very much the way a chemist might describe fire.

What’s heartbreaking to me about that scene is the look on Maru’s face as Steve speaks. Her eyes practically well up with tears at the thought that she is finally being understood. Finally, someone who shares a mutual love of the beauty of chemistry is complimenting her work, not hoping to use it for some ulterior motive, but simply for its own sake, because science is beautiful.

It was during this scene that I started to think about what might have been possible for Doctor Maru if she didn’t live under a patriarchy. What if she lived in a time and place where women could pursue science and achieve and excel without the blessing, permission, or aid of men? What if it were possible for her work to garner respect without needing to be connected to some greater, generally masculine goal?

If she weren’t desperate for patronage in order to continue her work, would she still be allied with the Germans? Or would she have the luxury of a moral compass then, with nothing threatening her Great Love, chemistry?

Once Diana enters the gala, and Steve starts eyeballing her, Doctor Maru mistakes his concerned glances for glances of attraction and she comes to her senses. Clearly he’s trying to get something out of me. I knew this was too good to be true. In that moment, she’s every nerd girl in high school whose class hottie flirts with her just long enough to get help on the homework, then goes back to worshiping the cheerleaders. 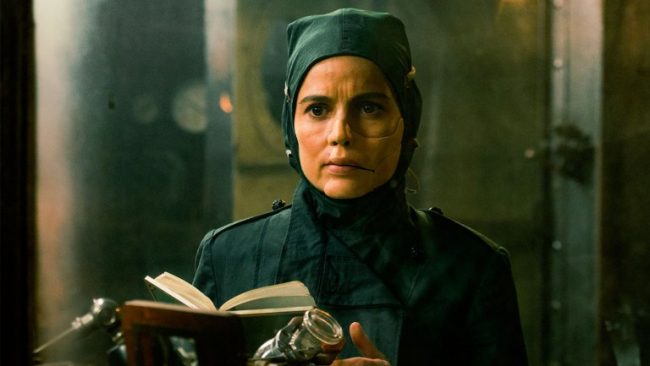 This leads to the other way in which her life is circumscribed by sexism. Her mask. In the comics, Doctor Maru hides her gender in bulky cloaks to get by, knowing that her femininity will likely be an impediment to her scientific work.

In this film, one that values beauty in all its forms, Doctor Maru hides what is likely the product of years of working with dangerous chemicals (though it’s never really explained in the film) with a delicate ceramic mask. One can imagine that it’s hard enough for a female scientist to gain support and resources for her work. Throw in a facial disfigurement, and it would be damn near impossible.

And it isn’t a bulky mask. She doesn’t wear a hood, or a scarf. She wears the most delicate mask she can, one that blends in with her skin and isn’t even noticeable as a mask from far away. Because patriarchy doesn’t value intelligence from women on its own. Not unless they also make some attempt to be pretty.

I don’t bring all this up to take away from her villainy. There’s absolutely no excuse for gassing and killing hundreds, if not thousands of people. Just so we’re clear on where I stand. However, thinking about the things that even a woman like Doctor Maru goes through simply to exist on the same playing field as men doing the same sheds a different light on how Diana responds to the offer of killing her at the end.

In the middle of their climactic battle, Ares gives Diana the opportunity to kill Doctor Maru as punishment for all the wrong she’s done (and there’s a lot of it). It looks like Diana’s going to take him up on his offer as she lifts a tank over her head and prepares to drop it on a sniveling Doctor Maru. But she stops herself. Her memory of Steve reminds her that people always deserve the choice to be better. That it’s not about ‘deserve,’ it’s about what you believe. That it’s possible, from moment to moment, to decide to be a better person, and Diana lets her go, giving Maru the chance to decide to do better.

I think it’s important that, in a film in which Diana has zero qualms about killing male characters (most notably, General Ludendorff and Ares), she is given pause when asked to kill a woman. The feminism of this film isn’t about equality (the same punishment, regardless of gender), but about equity (fair punishment).

What I saw in the moment Diana chose to let Maru go was an acknowledgement that there are mitigating factors when it comes to Doctor Maru’s evil actions. Yes, she’s a murderer. Yes, she’s a collaborator. But in a world that doesn’t place equal value on women and punishes ambition in them, it’s likely that Maru turned to these things in large part simply to gain access to her field of choice. Given the choice between very limited options, it’s understandable that someone who is clearly as talented and ambitious as Doctor Maru might make a wrong choice when backed into a corner.

And a choice made under duress isn’t necessarily a free choice.

In addition to learning about the value of mercy and always giving individuals the chance to choose good, this also shows us how women can better understand each other. There are myriad approaches to feminism, and myriad ways in which women choose to combat the sexism they face in their lives. We don’t have to agree with anyone’s methods, but we can and should do our very best to understand the impact of patriarchy on those methods, keeping in mind that all women, oppressed by sexism, are an inch away from snapping and going to extremes simply to be heard.