Women of Color UNITE: How One Producer and Her Tax Return are Changing the Face of Entertainment Within the entertainment industry, being a woman of color can be a tricky thing. When people talk “inclusion” they often talk about including “women” and “people of color,” as if those are always two separate categories. As if there aren’t women who identify as both. And so what ends up happening in practice is “diversity hires” being granted to either men of color, or white women, with women of color too often getting lost in the shuffle. Producer Cheryl L. Bedford is looking to flip that script.

Bedford is the producer of 16 feature-length films, including the NAACP Image Award-nominated documentary Dark Girls, which explores the deep-seated biases and attitudes about skin color—particularly about dark-skinned women—outside of and within Black American community.

Yesterday, I had the pleasure and privilege of attending Bedford’s “Women of Color UNITE” event, to which she invited a cross-section of women of color from all walks of life, and from all areas of film and television. Taking the financial cost on herself through a combination of her tax return and credit cards, Bedford hosted about 150 women of color who work in the entertainment industry to get to know each other as well as navigate their industry together, and employ each other.

Even better? Every single vendor associated with the party was a woman of color, from the valets that were hired, to the  DJ, Lizz KimKim, to the sommelier from Zuri Wine Tasting (who provided wines from black-owned wineries), to Salt of the Earth Catering (who provided an awesome soul food lunch). 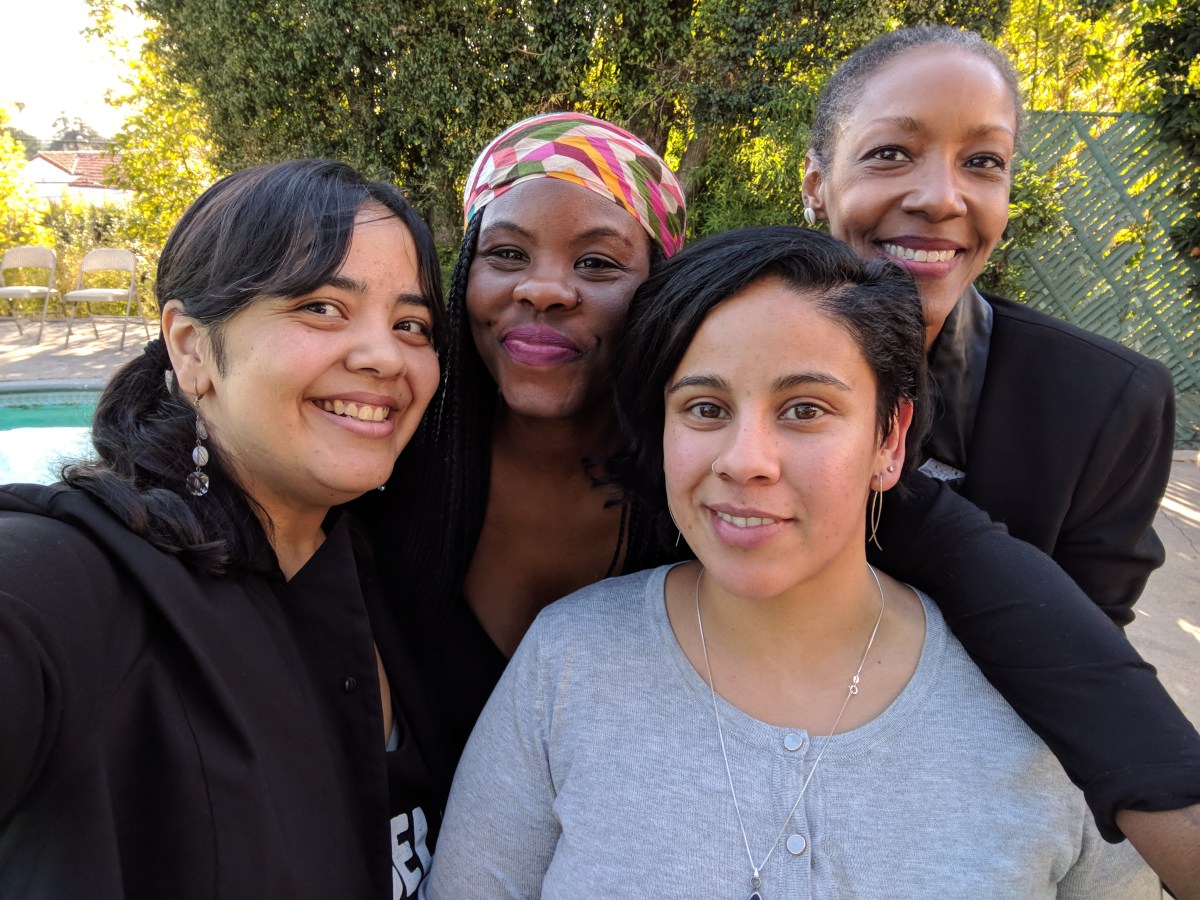 The author (left) and guests at the Women of Color UNITE event. image: Teresa Jusino

The event was free of charge for any woman of color in the entertainment industry who wanted to attend. This was important to Bedford, who acknowledges that, since women of color tend to be underemployed, and underpaid when they are, they often have steeper financial hurdles than their white counterparts. Women of color don’t often have the luxury of spending hundreds of dollars on networking and industry events, which is where a lot of hiring gets done. People tend to hire people they know, and they’re not likely to know you if you can’t afford to be in the room.

“Today, I am tired and hopeful and humble,” Bedford said to me today. “People received work. There was a shift in the room. Did you feel it? I felt the needle move forward last night. I am humbled to have had that experience. And I am hopeful that it will continue.” 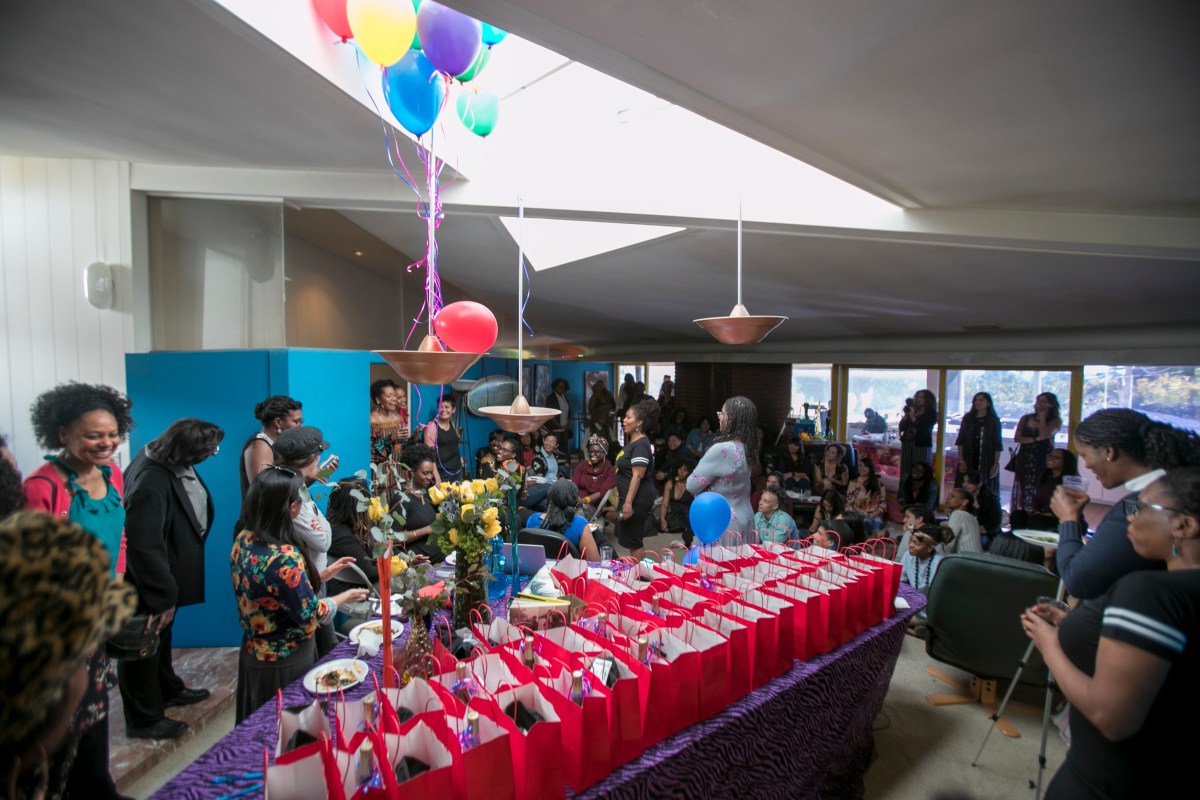 I did feel it. The energy was palpable, as many of these women were simply relieved to be in a room with industry professionals where they weren’t the only woman of color in the room. One guest, who’s been working in the industry in Los Angeles for about six or seven years said that she thought she knew “all the black women in film and TV in L.A.” Clearly not! Yet it can feel that way when so few of them are employed, and various circumstances make it difficult for them to truly come together.

However, Bedford had a larger plan in mind when organizing this event. It wasn’t just about the networking, though there was plenty of that. The real purpose of the event was what Bedford refers to as The JTC List. Named for her activist mother Joan Theresa Curtis, who passed away last year, The JTC List will be a one-stop shop for anyone looking to hire more women of color in film and television for all positions.

“We hear that the white male power structure ‘don’t know any [______].’ Now they don’t have to go out of their comfort zone and acquire a Latina or Muslim or Black Female acquaintance. People tend to hire people in their sphere, we need to change that and put women of color in their orbit. This is how we start. It is a simple list, with names, emails, links to IMDB [pages] and websites.

“We also included a “Side Hustle” column. The reason for that was so we as WOC can barter and help each other out. For instance: Melanna Gray of IndieFemme is a wonderful chef. She can cook for someone and they can DP for her. We can barter and get our projects made. We can also hire each other.”

The list will be going live next week on Oscar Sunday. Fitting, considering the fact that those in the sphere of Oscar nominees tend to be “so white” and “so male.” Bedford will be sending the list to HR Departments and Diversity and Inclusion Divisions of Production Companies, so that they no longer have an excuse as to why they can’t find a woman of color for any job a production requires. 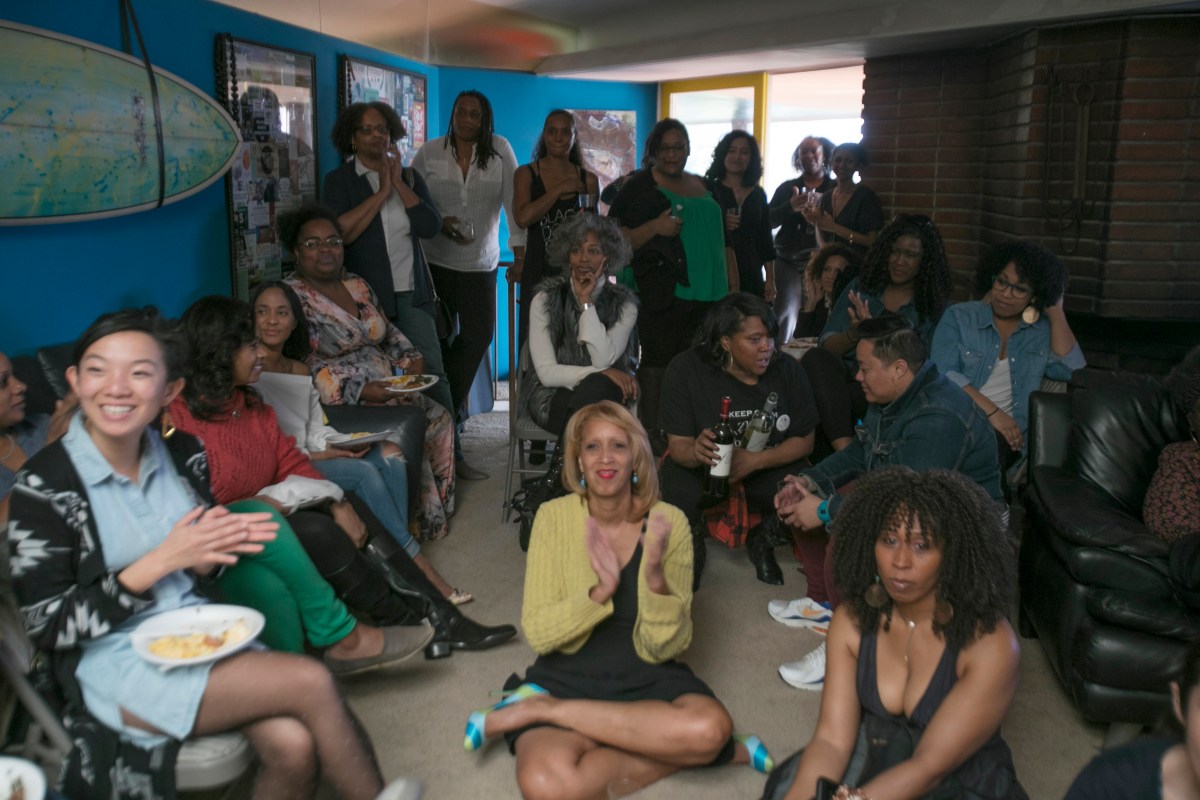 The list, and the Women of Color UNITE event are important not just for those doing the hiring, but for the women of color themselves. “Sometimes we buy into the notion of ‘there aren’t any [_______],'” Bedford says. “A producer last night said she was looking for a female DP and only knew two and neither were available. Hands shot up in the room, [and] she is going to interview women from last night for the job.”

If you are looking to obtain a copy of this list for hiring purposes, or are yourself a woman of color in the entertainment industry, email
[email protected] to find out more information on how you can receive it, or how you can submit your info.

“[I]f one woman of color armed with her tax return and a credit card can interrupt and upturn the status quo,” says Bedford. “[There are] no excuses left for everyone (specifically Studios and Production Companies) not to do their part to hire more WOC. Cause we are fierce and dope as shit.”