Where Are All the Women on the Autism Spectrum in Cinema? | The Mary Sue

Where Are All the Women on the Autism Spectrum in Cinema?

This is a problem that reflects issues extending far beyond the silver screen.

The Erasure of Autistic Women, in Both Science & Film

By and large, it’s been assumed that Autism just appears in men with more regularity than it does in women. This inaccurate perception can be attributed to a multitude of factors, including gender-based issues with how Autism is diagnosed that were chronicled in a report by the U.K.’s National Autistic Society. This concept even has roots in one of the earliest scientists to explore people with Autism. As mentioned in the National Autistic Society report, pediatrician Hans Asperger espoused in his 1944 work that “… no women or girls were Autistic” before later walking back this claim.

Such thoughts emerging from prolific scientific minds laid the groundwork for Autistic women to be ignored and/or undiagnosed. This had long-lasting adverse ripple effects on the visibility of women on the Autism spectrum, which linger even today. Such problems only became more pervasive once a Dustin Hoffman vehicle from the 1980s established the default mold Autistic people would inhabit in cinema, and in the minds of many, for years to come.

Hoffman’s titular role in Rain Man is never explicitly diagnosed as Autistic, but he demonstrates behavioral traits widely associated with Autism in the Best Picture-winning juggernaut. That ensured that Rain Man’s protagonist would be the default template for Autistic characters in movies going forward and shape the public’s view. Autistic people in film were now destined to be solely gifted savants, sidekicks for neurotypical protagonists, and of course, male.

Despite the fact that research has shown that Autistic people can inhabit a whole range of genders, subsequent attempts to recapture the success of Rain Man meant Autistic people in cinema were destined to be almost exclusively male. However, it wasn’t just Rain Man influencing this decision to eschew representation for Autistic women. Another larger issue at play relates to how movies tend to tiptoe around depicting women as anything that deviates from some very restrictive norms.

In her essay The role of women in film: Supporting the men, An analysis of how culture influences the changing discourse on gender representations in film, author Jocelyn Nicole Murphy remarks that “ research is still revealing that women are overwhelmingly valued in film based on their identification as a mother, wife, or lover (Lang, 2015). Women are portrayed as dependent on other characters, over-emotional, and confined to low-status jobs…” Women in film are supposed to be devoid of agency and exhibit behavior befitting of traditional maternal and/or wife figures—at least, if they want to be portrayed in a positive light. Such behavior does not include anything that be might considered “improper” or challenging to the restrictive norms of general society.

That approach simply does not work when representing any woman accurately onscreen, and that’s doubly true for Autistic women. Speaking as someone in the Autistic community, our physical behavior can appear clumsy and unpolished to those who aren’t Autistic. Such imperfections manifest in different ways from one Autistic person to another, but there is a universal difficulty with blending into what society considers “normal” social standards. From my own experience, I personally have difficulty with keeping conversations going, as well as controlling elaborate pieces of body language (including my own form of stimming) meant to express interior emotions.

These traits may not be what general society perceives to be proper social behavior, but I’ve learned to embrace them as just another part of me. However, Hollywood isn’t as accepting of such aspects of an Autistic person’s personality. The thought of having women onscreen act in this fashion would run against the default persona women are supposed to inhabit in cinema. These issues are only exacerbated for women of color, which has helped to render film representations of Autistic women of color nonexistent.

Radha Mitchell’s as Isabelle Sorensen and Josh Hartnet as Donald Morton in Mozart and the Whale. (Millennium Films)

On the rare occasion that Autistic women do emerge in movies, they still tend to do so in the type of supporting roles Autistic characters are restricted to. Radha Mitchell’s character Isabelle Sorensen in Mozart and the Whale, for example, serves as a love interest for the film’s Autistic protagonist, Donald Morton (Josh Hartnett). While I’m happy for Autistic women who may have found a bit of representation for once in Isabelle, as usual, the lack of representation in sheer numbers also leads to a lack of the variety needed for proper representation.

Sigourney Weaver’s Autistic character in the British film Snow Cake is similarly limited in her narrative role. She also must function in the tired Movie Autism stereotype of a sidekick meant to aid the journey of the neurotypical protagonist. She exists to guide Snow Cake lead Alex (Alan Rickman) on a journey, rather than function as the lead of her own story.

But hope for Autistic women in film does exist. You just have to know where to look for it—like, say, in an indie romcom starring two Autistic characters.

Sarah (Samantha Elisofon) is one of the two lead characters in Keep the Change. This 2018 indie romantic-comedy was written & directed by Rachel Israel. Keep the Change follows David (Brandon Polansky), a young man on the Autism spectrum who joins a support group for Autistic people. There, he meets Sarah, and eventually, the two begin to develop a romantic relationship.

Though Sarah is the love interest for Keep the Change’s protagonist, she is able to stand out as her own, fully fleshed-out character. She is given her own interests, passions, and agency. Contrary to the passive way most Autistic characters, women or otherwise, are framed, Sarah is an assertive figure who seems to have come from the real world. Aiding her authenticity is that she’s one of the rare Autistic characters in film to be portrayed by an Autistic performer.

One of the many ways films dealing with Autism have struggled is that they have lacked the involvement of people actually on the Autism spectrum. Neurotypical directors handling neurotypical performers have been the default creative teams for stories about Autistic experiences. That tradition is wonderfully upended with Keep the Change’s lead performance from Samantha Elisofon. Rather than just relying on stereotypes associated with Rain Man as so many neurotypical performers have done, Elisofon imbues Sarah with specifically-rendered pieces of body language and behavior. Her actions are as idiosyncratic as the behavior found in actual Autistic people.

The character of Sarah also excels because both Israel’s writing and Elisofon’s performance aren’t afraid to make Sarah complex and messy. Sarah doesn’t fit into the “genius savant” stereotype Autistic movie characters are supposed to adhere to, nor does she embody the perfect romantic interest archetype women so often have to inhabit in romantic comedies. Instead, Sarah can mess up, say the wrong thing, be awkward, and not be demonized for it.

As an Autistic viewer, watching Sarah stumble at a social gathering and have Keep the Change treat it as not the end of the world was immensely reassuring. I always feel this pressure to constantly do and say the right thing in social situations to the point of instilling anxiety in myself. Keep the Change normalizes imperfect Autistic people rather than just depicting Autistic individuals as wisecracking and occasionally sage sidekicks.

The character of Sarah in Keep the Change is a tragically rare occurrence when it comes to how Hollywood approaches Autism. The very presence of an Autistic woman is already enough to make Keep the Change a rare creation, a the fact that the character is also an Autistic woman that’s defined by her own idiosyncratic personality really does make the project something special!

Keep the Change’s entire approach to Autistic characters (which includes a rare depiction of a queer Autistic person), breaking down preconceptions that only cis-het white Autistic men exist, is groundbreaking, but the way it allows Sarah to become such a three-dimensional being is especially remarkable.

Even in the face of the overwhelming erasure of Autistic women in cinema, a character like Sarah gives me hope. Well-realized Autistic women can exist in film. If one movie can do it, why not others? Why not protagonists? Keep the Change should serve as a call to arms for the necessity of onscreen depictions of Autistic women from all walks of life.

Both cinema and the world in general have a one-size-fits-all approach to imagining what Autism looks like. That simply doesn’t line up with reality. There’s a plethora of variety in the Autistic community in terms of gender, sexuality, body type, race, and so much more. Pop culture representations of Autism should be similarly diverse, particularly in regards to reaffirming the existence of Autistic women. We have a long way to go in that regard, but Keep the Change is a mighty fine first step. 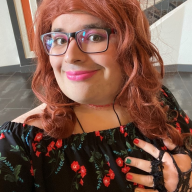 Douglas Laman is a life-long movie fan and writer whose works have appeared in outlets ranging from ScreenRant to The Spool to ScarleTeen. Residing both on the Autism spectrum and in Texas, Doug adores pugs, showtunes, Fantastic Mr. Fox and anything related to Carly Rae Jepsen.