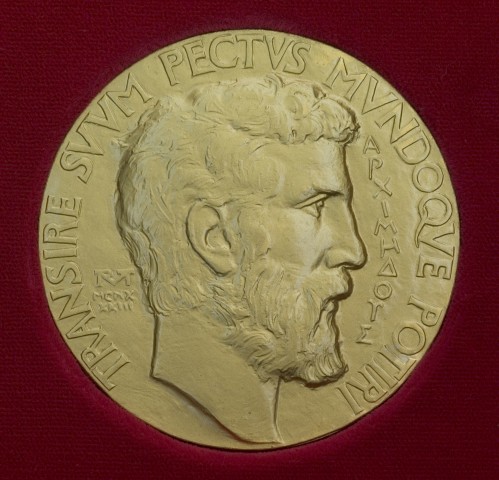 The Fields Medal, or the International Medal for Outstanding Discoveries in Mathematics, has been awarded to 2 to 4 mathematicians under the age of 40 every four years since 1936. This year, for the first time, it will be awarded to a female mathematician: Iranian born Maryam Mirzakhani.

Mirzakhani will also be the first Iranian to be awarded the prize, which this year amounts to about $13,700 and will be specifically dedicated to her work on the dynamics and geometry of Riemann surfaces and their moduli spaces. I’m not going to pretend to understand a lick of her research, but here’s a paragraph that I sort of understood from a description of her work:

Riemann surfaces are named after the 19th century mathematician Bernhard Riemann, who was the first to understand the importance of abstract surfaces, as opposed to surfaces arising concretely in some ambient space. Mathematicians building on Riemann’s insights understood more than 100 years ago that such surfaces can be classified topologically, i.e. up to deformation, by a single number, namely, the number of handles. This number is called the genus of the surface. The sphere has genus zero, the surface of a coffee cup has genus one, and the surface of a proper pretzel has genus three. Provided that one disregards the precise geometric shape, there is exactly one surface of genus g for every positive integer g.

See, I understand pretzels and coffee cups. This is why I’m not getting a Fields Medal any time soon.

The Medal recepients will officially be announced tomorrow: it was merely a glitch or mistake in the website for International Mathematical Union’s website that revealed the winners today. The Fields Medal is restricted to mathematicians under 40, despite name discoveries made by theorists over that age, in order to encourage “further achievement on the part of the recipients and a stimulus to renewed effort on the part of others.” Hopefully some of those others are lots of little Math loving girls all over the world.

firsts for womenmathwomen in STEM