An Open Letter to Nerd Culture: Wolverine as Toxic Masculinity 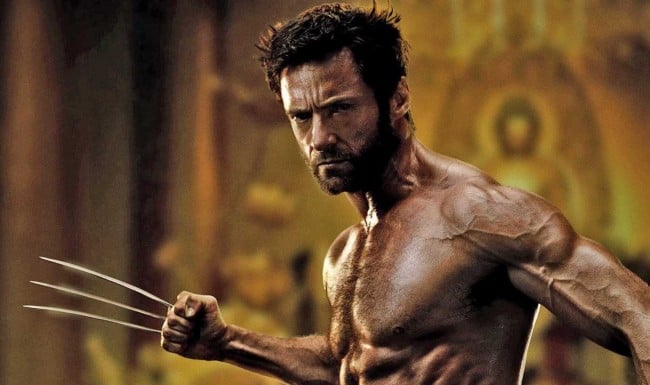 Fellow nerds, we have a problem. Women who dare have opinions about, well, anything are getting harassed, and going to cons can mean running a gauntlet of unwanted comments and harassment. Too often, I see guys like me spouting of the worst MRA and PUA clichés. Heck, those ideas shouldn’t even be getting any traction with anyone who has any idea what exclusion is like, but they do, and I think I know part of the reason why.

I blame Wolverine. If you want to see some of the worst traits of toxic masculinity expressed in a comic book character, you don’t need to look a lot further than the short, adamantium-boned, dangerous Canadian. I submit that it’s time for film directors and comic book writers rethink the way they write him, and more importantly, for all of us nerds out there to rethink why we like this guy. Ever had that racist or sexist friend that you just can’t hang with anymore? Our pal Logan fits the bill.

Before we get the predictable howls from fans, let me get into why I lay so much at Wolverine’s feet—after all, he’s far from the only character who’s problematic in this way.

First off, Wolverine has to be one of the most popular characters in comics. I’d argue he’s the easiest name-check for even non-comic fans, and that says a lot. It’s easy to forget that among the characters who can headline a movie, Wolverine is the most recent—his first appearance was in 1974. Compare that to Spider-Man, The Fantastic Four, or the Hulk, all of which debuted nearly 15 years earlier. The DC trinity of Superman, Batman, and Wonder Woman goes back to the late 1930s.

It’s also important to note how big of a breakout character Wolverine was. For that, we can thank Chris Claremont. Claremont took over the X-Men in 1975, and that was when Wolverine joined the team. Claremont’s run with the X-Men lasted until 1991, and I don’t think it’s an accident that during his tenure, the X-Men became one of Marvel’s best-selling properties. (The X-Men was Marvel’s best selling title for an astounding run of 17 years). Wolverine was consistently the most popular guy on the team, so much so that he could headline his own series in 1982—something the other X-Men wouldn’t be able to sustain until much later.

Wolverine’s growing cachet and the ability to be a bankable character for a billion-dollar movie franchise parallels the rise of what we used to call “nerd culture” into the mainstream. That popularity—that presence—is why who Wolverine is makes such a difference, and that gets us into another factor that has to do with his story.

Wolverine is a mutant, and as Claremont wrote him, he’s a member of a group that’s systematically oppressed. There are all kinds of problems with that metaphor, but that’s the way the writers went. As a superhero, he was willing to kill and openly discuss the kinds of moral choices that go with that. This kind of anti-hero was less common back then; it’s so cliché now that it’s hard to remember just how different that was.

The Wolverine is almost always written as gruff and usually taciturn. He’s fearless and knows how to fight better than anyone in the world. He’s a former soldier and secret agent. He shows his feelings to almost nobody. Though we do get a lot of internal monologues, it’s notable that Wolverine almost never shares any of it, and it’s almost always because he wants to tough it out by himself. Claremont even wrote in “berserker rages” that would make Wolverine almost unbeatable in a fight. Of course, we can all remember he has adamantium bones and a healing factor that, at least at the beginning, wasn’t the effective immortality it is now. (Those are symbolically important, too. We’ll get to that in a bit).

He was even later written as a settler in the Canadian Rockies, digging out a living by dint of his family’s pioneer strength (and of course, there’s the whole “I’m down with the Natives” thing, which is a whole other discussion).

The above character traits, though, are a kind of Clint Eastwood macho bingo. In fact, Wolverine’s resemblance to Eastwood is not accidental—on this page from X-Men #133 (1980) you can basically see him do a riff on the famous “Do you feel lucky?” lines from Dirty Harry. Read the page and then compare the clip. 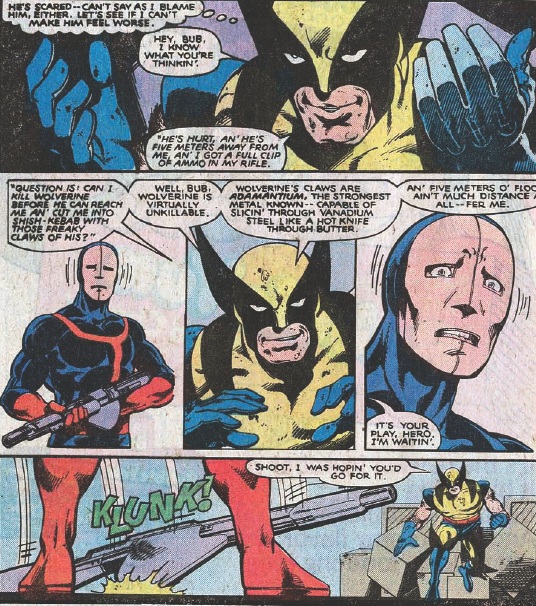 This was no angsty teen, à la Spider-Man. This guy was a badass. He’s an expert at violence, and everyone around him knows it. He is, basically, not to be messed with, or he might kill you.

And he was, to any teenage boy, awesome.

Like a lot of superheroes, Wolverine is a kind of power fantasy. He’s not a complex kind of guy. (It’s especially fascinating given that the character has been around for 40 years now, and few writers have really tried subverting any of this). Logan tries to be a better person, but that always takes a back seat to his expertise at violence.

And this gets us to masculinity. When he is juxtaposed against the other X-Men, it’s always interesting how he is not only considerably older, but hairier as well—contrast this with the way the other men in the series are drawn: much less hairy and always looking much younger. Wolverine is a man.

And his stories reflect those traditional “manly” values: self-reliance, a willingness to use violence, an emotionless demeanor—unless he is threatened—and then we get the kind of performative masculinity that we saw in the Dirty-Harry riffing scene above. Scenes like it have been written for Wolverine so many times I’m sure we could all come up with good examples.

For that nerdy kid who gets kicked around, he was the kind of superhero who you wanted to be. You might never get adamantium bones or a mutant healing factor, but if you trained hard enough, you could be like him. You, too, could be awesome. As power fantasies go, this one fits the bill pretty closely.

If you were that kid, those adamantium bones and healing factor were just the thing. You might get humiliated, but you told yourself that you were better. That someday those people would get theirs. You couldn’t be broken. You would heal. (This isn’t unlike Spock’s logic and denial of feelings, which for many people serve the same function).

And then there’s his relationships with women. There was always an undercurrent of tension with his love for Jean Grey (which was highlighted much less during the first half of Claremont’s run), but does he take a polite “no” and get on with his life? Evidently not, as later iterations of the character (and notably in the movies) have him ribbing the guy she’s ostensibly with and trying to show him up.

Most of the other women in Wolverine’s life end up being fridged. From Silver Fox onward, they exist only to motivate him to do more violence, or to be the kind of pedestal-inhabiting counterpart to his violent nature, à la Beauty and the Beast.

Myself, I grew up in a working-class neighborhood. My peers were the very definition of performative masculinity. The rules of being a man were simple: If you couldn’t fight, you were a target. Projecting a tough-guy image was a requirement for getting through the day.

I got a few beatings and a lot of humiliating moments. I remember at least a couple of occasions where I attacked my best friend because I knew if I didn’t, I would have no respect among the other malcontents. (And yes, I was bad at this).

Is it any wonder that Wolverine would appeal? Even though he wasn’t my favorite character, he was what I wanted to be: unbeatable, tough in any situation, and fearless—never showing his feelings, never showing he was hurt.

It affected the way I saw being a man and created disconnects I couldn’t reconcile. My mother was a strong feminist; she cared about women’s health and became a physician at a time when it was still a male-dominated profession. Both parents were adamant about respecting women as people and not being wedded to gender norms (one of my early reading experiences was Free to Be You and Me, which can look dated now, but planted the seeds of doubt about such norms for a lot of men my age).

However, I was surrounded by a very different message. Wolverine was telling me that showing feelings was a sign of weakness, and the few times I did that, the moments when I made myself vulnerable, I got the message loud and clear: Wolverine is right and your parents are wrong.

Which brings us to another piece of the puzzle. When you’re an adolescent nerd, at least when I was a kid, a whole lot of your relationships are effectively abusive. You’re humiliated by your peers. You learn to trust nobody, and those you do trust you are pretty loyal to, almost to a fault. You harbor a deep, smoldering rage. Sound familiar?

This poisons every relationship—especially those with women. If you’re surrounded by abusive models, it’s difficult to even imagine what a non-abusive relationship might look like. Now mix that with a power fantasy that’s all about doing violence to people who do that to you. This is one reason why Nice Guys exist. It’s why MRAs get the attention they do, and PUAs. There’s a fundamental mistrust of humanity at the heart of those phenomena. (A distrust that Wolverine, by the way, shares).

Wolverine is a man’s man; he’s the ideal we aspired to, even if we didn’t always admit it. He is an important touchstone for so many comic nerds. The character isn’t entirely bad—he can inspire us to better ourselves. Heck, Wolverine is probably one reason I became a martial arts student, spent a lot of time and effort discovering that I loved foreign languages, and wanted to be a journalist, but his warmed-over Hemingway idea of manliness has outlived its sell-by date. It’s manhood as seen by a lonely teenager, and it’s time we all grew up.

There’s a lot of good ways to write Wolverine that dispense with those clichés. Captain America might be one to show us how. There are plenty of other characters, major and minor, that writers are starting to gender- and sexuality-bend a bit—to rethink what a man is, and should be. Being a man shouldn’t mean you have to be the most awesome at violence, and that means, Logan, that we’re going to have to part company for a while.

Jesse Emspak is a freelance science journalist in New York. His work has appeared in several outlets including New Scientist, Scientific American, Smithsonian.com, and Livescience. You can see some of his work here or follow him on Twitter: @Mad_Science_Guy.