AT&T has caught a lot of flak recently for throttling unlimited data plans down to practically unusable speeds. AT&T stopped offering unlimited data plans a while ago, the only remaining users with unlimited plans being those who were fortunate enough to be grandfathered in. AT&T asserted that the throttling is to keep their network from being overtaxed, but many users feel more like AT&T is just trying to shove them over to a tiered plan. A new study by Validas, a wireless bill analysis firm, sides with the users showing that data usage on unlimited plans is comparable — almost identical — to usage on unlimited plans.

Validas took a bunch of data from 55,000 cell phone bills, AT&T and Verizon users alike, from 2011, before all this unlimited data throttling stuff really started. What the numbers show is that there’s really no huge difference in behavior between users with unlimited plans and users with tiered plans, even among customers with data usage in the top %5, this study’s focus. 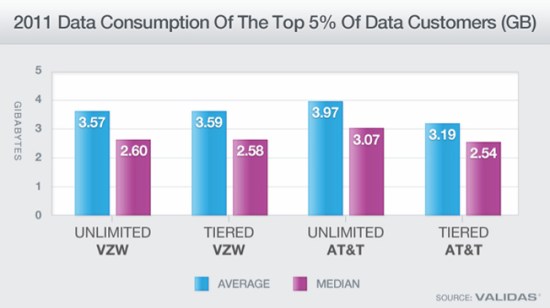 Validas put it this way in their report:

“When we look at the top 5% of data users, there is virtually no difference in data consumption between those on unlimited and those on tiered plans—and yet the unlimited consumers are the ones at risk of getting their service turned off. So it’s curious that anyone would think the throttling here represents a serious effort at alleviating network bandwidth issues. After all, Sprint does seemingly fine maintaining non-throttled unlimited data for its customers.”

Now AT&T definitely isn’t the only one out there throttling data speeds, but they’re probably being the most agressive about it, often throttling after only 2gb of usage. For reference, T-Mobile throttles after 5gb, and Verizon throttles its very top 5%. All in all, what this study shows is that network stress probably has very little, if anything, to do with data throttling. Instead, it’s likely a business move to transfer customers to tiered data plans where overages become a possibility. And if you think that sounds suspicious, or even far out, ask yourself this: how long have you been paying in order to send text messages?