$19 a Month, Unlimited Talk, Text, and Data Plan Is No Joke [UPDATED] 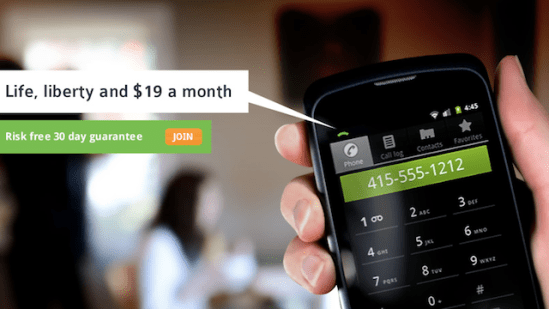 There is a $19 dollar a month, unlimited talk, text, and data cellphone plan. Seriously, this is for real. The plan is offered by Republic Wireless and seems to be everything it claims to be, with a few sensible caveats, but hey, it’s $19 dollars a month. It would be sketchy if there weren’t any caveats. The plan was only announced last week, to much jaw-dropping, and now it really exists. It seems that the magic is all made possible by Wi-Fi being used in an exceedingly intelligent way.

So, the way that Republic Wireless can manage to offer this kind of deal is that their phone automatically routes calls and data usage through Wi-Fi whenever possible. You set it up with the credentials for any given network once, and from then on, the phone decides whether or not the Wi-Fi strength is strong enough to make a call or download a webpage. If it is, it uses it. No end-user apps or anything, it just happens.

Now this kind of dynamic Wi-Fi and 3G switcharoo has certain hardware requirements, which brings us to caveat number one: Lack of phone choice. For the time being, the phones you can have on your Republic Wireless plan are few. Well, singular. The LG Optimus is the only one supported at the moment and it isn’t exactly a flashy one. It’s still on Gingerbread, but again, let me just say: $19 dollars a month. Also, the phone is only $199 with no contract, or $99 with no contract if you use the promo code “welcome19” before November 27th.

That no contract thing is great, but it also leads right into our other caveat, the big one: Republic Wireless reserves the right to kick you out and cut you off if you use too much 3G data. Like, if you use too much 3G data, you won’t have a plan anymore. But hold on, because it’s not as bad as it sounds. First of all, let me just say $19 a month again. Second, Republic indexes how much 3G data you’re using and compares it against everyone else. Get too high and you’re out of there. But given the whole WiFi thing, it makes a lot of sense. Also, the limit isn’t obscenely low. Republic says you can easily send 150 texts, talk 550 minutes, and download 300 mb in a month without so much as getting a warning.

All in all, this sounds fantastic to me, and over the course of writing this, I’ve gone from “seriously considering” it to “really seriously actually considering” it. It may not be for everyone since it generally relies on you being around Wi-Fi (which I am), having low standards about your phone (which I do), and being pretty cheap (which I certainly am). It may not steal any iPhone users from the big guys, but when you’re still using an ancient LG flip phone (complete with default background) like I am, this looks like a gift from the gods themselves.

UPDATE: Republic Wireless has kicked the whole “Don’t use too much, or else” thing in favor of becoming literally unlimited; no strings attached.