Did they get the kids back if they guessed that the password was "Rumpelstiltskin"? 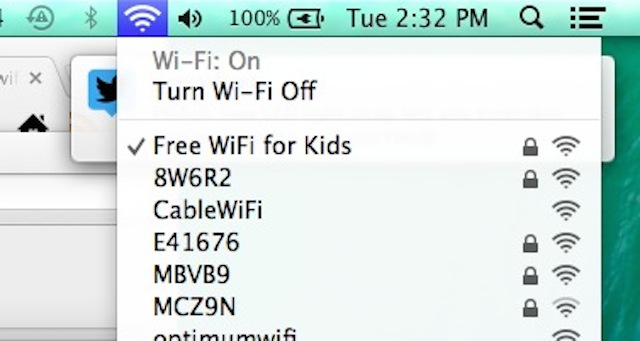 Digital security firm F-Secure gave a big F-you to EULAs with a WiFi hotspot publicity stunt that allowed for free WiFi access as long as users agreed to its terms and conditions, which included giving away the rights to their first-born children. A few users agreed, possibly proving they didn’t read the agreement, they’re not that interested in kids, or they had some really important tweets to send.

The Guardian says that six people agreed to F-Secure’s terms that the WiFi user agreed to hand over their first born child for “the duration of eternity.” I wonder if you could negotiate down to “for life” in exchange for slower speeds. Six people might not seem like a whole lot, but try to remember the last time you actually tried joining a random network. The poor souls who still need WiFi that badly didn’t stand a chance.

F-Secure said in their report: “Our legal advisor Mark Deem points out that—while terms and conditions are legally binding—it is contrary to public policy to sell children in return for free services, so the clause would not be enforceable in a court of law.” Lucky for those people that we don’t live in a world where selling your children is acceptable. Or lucky for their future children, depending on how badly they needed that WiFi.

The device F-Secure used to provide the connection would be small enough to carry around in concealment and get nearby Internet-starved innocents to agree to any kind of ridiculous terms. The purpose of the stunt wasn’t to steal anyone’s children in a mundane modern fairytale way but to raise awareness for the security problems with WiFi hotspots.

At least, that’s what F-Secure has said, but I have yet to have a conversation with them and play the recording backwards to look for messages about selling your soul for WiFi. I’ll keep you posted.

Previously in being duped