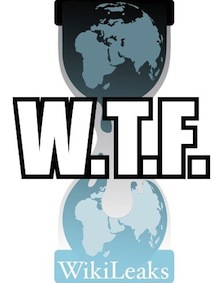 Today in things you couldn’t possibly make up: The Washington Post reports that the CIA has launched an internal task force to evaluate the fallout from WikiLeaks’ massive dump of U.S. diplomatic cables. Oh, and within CIA headquarters, the WikiLeaks Task Force is “mainly known by its all-too-apt acronym: W.T.F.”

The irreverence is perhaps understandable for an agency that has been relatively unscathed by WikiLeaks. Only a handful of CIA files have surfaced on the WikiLeaks Web site, and records from other agencies posted online reveal remarkably little about CIA employees or operations.

Even so, CIA officials said the agency is conducting an extensive inventory of the classified information, which is routinely distributed on a dozen or more networks that connect agency employees around the world.

To adapt a line from a Boing Boing reader, does this make them the men in the black ROFLcopters?