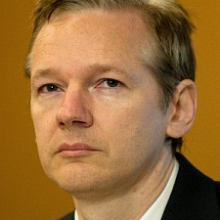 Embattled WikiLeaks founder Julian Assange, for whom the UK has just issued an arrest warrant, says that he has a plan if he’s arrested or killed: A so-called “poison pill” file of damaging secrets — possibly covering BP and Guantanamo Bay, among other subjects — which his lawyer likened to “a thermo-nuclear device in the information age.”

Julian Assange has distributed to fellow hackers an encrypted ‘poison pill’ of damaging secrets, thought to include details on BP and Guantanamo Bay.

He believes the file is his ‘insurance’ in case he is killed, arrested or the whistleblowing website is removed permanently from the internet.

Mr Assange’s British lawyer, Mark Stephens, warned today that WikiLeaks was holding further secret material which he dubbed a ‘thermo-nuclear device’ to be released if the organisation needed to protect itself.

He said many of the papers being retained contained ‘material of equal importance to news-gathering’ as those already published.