Here’s Why You Should Be Watching The 100 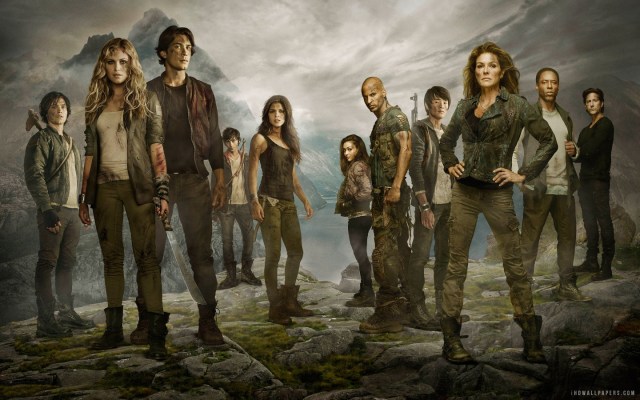 So, you know how good science fiction on television is kind of similar to a barren wasteland? Sure, we have our comic book adaptations, and Supernatural is still kicking around, but where’s our really, genuinely good science fiction that goes further than men in capes and demons and ghouls? It’s been a while since we’ve had something likened to Star Trek or Battlestar Galactica on our television screens, and while I wouldn’t be foolish enough to say that The 100 fills those voids, I will say that it’s the best sci-fi television has had to offer in a long while.

Space ships, a hierarchy amongst a civilized but marginalized people, delinquent kids who are sent down to Earth to see if it’s livable and intelligent and strong willed female characters: all of this takes place in the CW’s The 100, a show that’s been unfairly judged due to the channel hosting it and the abysmal offering that was its first episode. Like many other shows, however, it grows on you, and soon goes from mindless entertainment to a thoughtful show about consequences, leadership, and what it means and takes to survive.

Set nintey-secen years in the future after a nuclear war has destroyed civilization, the show has that post-apocalyptic vibe that’s so popular these days; and, for a large portion of the show, it’s set is space, giving it a classical science fiction atmosphere. The colors in space are diluted and grey compared to the vibrancy of Earth. The younger citizens work to try and find freedom on an unforgiving planet, while the members of what they call the Ark struggle to keep people’s morale up when danger seems imminent. All of these plotlines come to a head by the first season’s end.

Mild spoilers for season two below.

Season two thus far has been about the kids trying to keep their control, despite the interference from the more politically-minded adults, while the members of the original 100 also try to rescue their friends from an eerie lockup called Mount Weather, where other humans have resided for decades now by refusing to go out into the fresh air. They’re trying to make peace with the Grounders (humans who have learned who to survive long before the “people from the sky” showed up) and it’s a tumultuous relationship.

So, why watch it?

Well, as I’ve already mentioned, this is true-blue science fiction, and that’s exciting in an age of television that’s still largely dismissive of genre series, and more apt to jump aboard “prestige” shows. The 100 succeeds in being a beacon for science fiction lovers while also refusing to rest on its laurels and on the campier nature of The CW, and instead sets its sights higher. There’s an exciting sense of ambition that comes along with the show; not all their ideas work, but they’re trying. With some obvious Lost influences, The 100 has given us a taste of the strict life in space that would happen after humans destroyed one another. The show also gets a lot of mileage by filming the characters in an overgrown wilderness that shows what would happen to our planet if it were polluted by radioactive weaponry.

The show isn’t afraid of consequences, and there have been a number of times where it’s surprised me by following through. An acidic fog mutilated one of the original 100’s bodies and another kid is forced to put him out of his misery; another original member is faced with the cold and harsh reality of what killing means. That same character causes the death of over three hundred people while trying to avoid his own capture. These characters have all done bad things, and they’ve been punished for them, and the show makes sure they are have to deal with the associated fallout. The show handles morality, the question of what constitutes being good and being proactive, and if those two ideals can intersect in a way that’s beneficial to their society.

It’s the characters, though, that truly shine. As one-half of the shows leading pair (and one-half of the audience’s favorite duo), Bellamy Blake was easily a highlight of season one, and actor Bob Morley is certainly one of The 100’s more talented actors. Projected to be this burly, selfish, and physically demanding character, Bellamy was slowly stripped down to be more than that. He didn’t have an affinity for violence, despite what notions he imposed on others, and his main interest was protecting his sister, Octavia. By the end of season one, Bellamy had shown himself as someone willing to to sacrifice himself for others in his community, and someone who only wanted to protect the home they’d come to build. His relationship with his co-leader Clarke, and the dynamic the two possess, is one of the most fascinating plot developments of the series.

But really, The 100 is a show about women, and how they can be warriors, mechanic geniuses, healers, and leaders. There are a wealth of fantastically-written female characters on the show who aren’t simply interesting in their own right, but are also the main plot drivers of the show. Where they go, the people and narratives follow. There’s Abbie, a council woman on the Ark (and then latter on Earth); resilient, determined, frustrating, and, most importantly, not someone who always makes the right call, and often endangers those she’s trying to protect. Octavia was hidden under the floor boards of her living space for most of her life, due to being an illegally-born second child, until her mother was captured, sentenced to death, and Octavia imprisoned. Despite this, she’s still both compassionate and defensive. Raven is the genius mechanic who solves all major tech problems and has saved the day more than once.

No one on the show, however, even comes close to touching what an incredible character Clarke is. Partially due to the writing, and partially due to a wonderful and improving performance by Eliza Taylor, Clarke is just a fantastic character who’s allowed nuance, who’s allowed to contradict her own pre-conceived convictions, and who gets to be the untested leader. Clarke Griffin is given the impossible task of ensuring that the 100 delinquents shot to Earth don’t get killed, either by each other or by the volatile planet and it’s inhabitants. She gets to be strong but not infallible, she’s passionate but not angry, she’s trustworthy but not naive. She knows what needs to be done and, while she has a moral high ground, she isn’t above using violence in order to achieve her goal. She’s a character who’s only gotten better with time, and if there were one reason to give this show a chance, it’s her. We need more characters like her, whether it be in prestige shows or genre shows or anything that falls in between.

Female characters should get to be complicated, as opposed to being simply “strong,” and The 100 excels at this, even when it falters in other aspects. From the antagonists to our heroes, show’s women are the ones that move the story forward, who are always progressive in their roles, and are the ones that other characters learn from and look to for guidance.

The 100 isn’t a perfect show, but it’s a show that isn’t falling into familiar trajectories. It continues to surprise me – and the ladies, plain and simple, kick ass. It’s a fun show, and sometimes even it’s a great show, and now that it’s been picked up for a third season, it’s the perfect time to catch up on all that you’ve missed.

The 100 returned from mid-season hiatus this week. You can catch it Wednesdays at 9pm on The CW.