It’s-A Me, Mary Sue: Why She’s An Important Figure For Fanfic And Fangirls

Hide your fics, the Mary Sue is coming! 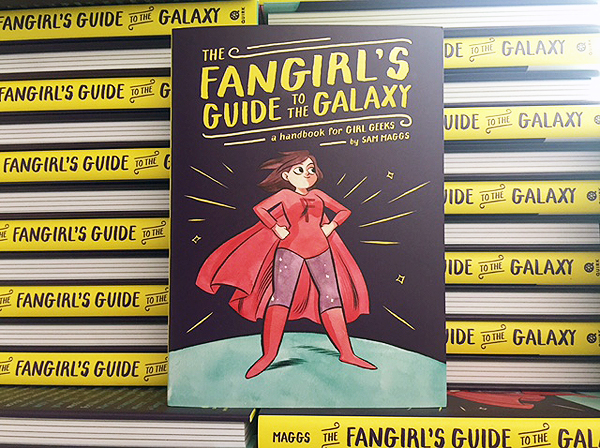 Well friends, it finally happened. My first book, The Fangirl’s Guide to the Galaxy, is out today. It’s a real thing! I’ve been doing a blog tour to promote the release of the book, but it just didn’t feel right for me to write something special for another blog on the day Fangirl’s Guide came out – so today, the blog tour drops by my very own home at The Mary Sue. Guess what I’m going to be talking about?

So fanfic is great. We all know that. You get it. But what about… you know, that kind of fanfic? She-Who-Shall-Not-Be-Named? The Steven Moffat of fanfics? The very namesake of this site?

We can still hate her and the people who write Mary Sue fics, right? RIGHT?

“But Sam,” you might say, if you were here and not a hypothetical figment of my imagination, “everyone hates Mary Sues. They’re terribly-written original female characters who typically exist only as a self-insert for the fic writer. She’s way too perfect – gorgeous, funny, brilliant – and her only flaw is usually something adorable, like being klutzy. She has the answer to every problem, overshadows all the established female characters, and always winds up with a gaggle of men following her around, desperate to date her. She’s too passive and sensitive. Or sometimes she’s too forceful and powerful. She has no room for growth. She’s annoying. Why isn’t it okay to hate on Mary Sues?”

To which I would say, “You are incredibly verbose and happen to know a hell of a lot about Mary Sues; but I respect that, so it’s okay.”

But there’s a reason the most highly-regarded website for geek feminism titles itself after one of the most vilified tropes in fanfiction – cause hey, turns out, the concept of the Mary Sue?

We’re going to do a thing. Here’s my least-favorite Mary Sue, are you ready?

Okay, so there’s a girl. She’s a spy. Well, technically she’s a member of the CIA, but she was also in the Navy before? Anyways, it doesn’t matter; she’s the best spy in the whole world, has a million cutting-edge gadgets, the most bitchin’ car imaginable, and she always solves major international crimes. She’s the foremost small-arms expert in the world, and can shoot with deadly accuracy. And she does it all while wearing these incredibly-stunning evening gowns and sky-high stilettos because no one can cramp her style, hell naw.

Did I mention she’s gorgeous? She’s a gorgeous girl. Slim with dark hair and blue-grey eyes. So gorgeous that no man can resist her. Honestly, her only real flaw is that she can never commit, so she spends her life having an endless series of one-night stands with super-hot dudes who can’t resist her incredibly mysterious allure. Her inability to settle down only seems to make men want her more. Even her enemies want to sleep with her. Obviously.

She doesn’t treat people very well (she’s busy being a spy and having a lot of sex, you understand) but she somehow seems to retain the respect of everyone she works with, and people always want to be her friend despite her constant aloofness. She deals with the loss of her parents by dedicating herself to truth and justice, and she’ll stop at nothing to save the day (and look damn good while doing it). She doesn’t have any super powers, but she always manages to take down bad guys with ease, and never gets a scratch on her. She’s filthy rich, always right, and if you ever try to defy her, you will be wrong, and you will be defeated.

What an insufferable Mary Sue, am I right?

Oh, did I leave out her name? How silly of me.

Her name is James Bond.

It could just as easily have been Batman.

Or Edward Cullen. Or Legolas. Or Captain Kirk. Or Mikael Blomkvist. Or Aragorn. Or Lestat. Or Wesley Crusher. Or Ender Wiggin. But, oddly enough, male characters with these Mary Sue-esque traits never seem to get called out; we don’t even have an accepted name for them. Gary Stu? Marty Stu? It hardly matters, because no one ever uses it. For some reason, it’s totally okay for male characters in fiction to be perfect, strong, over-sexed paragons of righteousness, but as soon as it’s a lady – nope, we want no part of it. Bad writing. No room for growth. Annoying. Unrealistic.

Let’s back up a minute and talk about where the term “Mary Sue” comes from. Fanfic started getting widely published in Star Trek fanzines in the late ‘60s, and yeah – there were some pretty solid self-insert fics, even way-back-when. In response to the perceived awfulness of these fics, Paula Smith published a satirical fic in a 1973 issue of the Menagerie fanzine that featured a 15-year-old Youngest Starfleet Lieutenant Ever, Mary Sue, who – naturally – was So Super Smart and Everyone Loved Her and, well, you get the point.

The name stuck, and perfect, self-insert original characters in fanfic have been dubbed “the Mary Sue” ever since. And we need to stop with the hate, because it’s actually pretty harmful to ladies writing fic.

Yeah, Mary Sue fics are self-indulgent wish-fulfillment. But isn’t all fiction? Obvious self-insert character or no? Any writer who spends hours or weeks putting their thoughts onto paper for other people to read and heap with praise is really just asking you to love them (please love me). And we’ve all heard the famous phrase “write what you know”; every writer is just putting their own experiences and feelings into words. I wrote Fangirl’s Guide because I love geek culture, and feminism, and fangirls, and I wish there had been a book like this for me when I was fifteen, and I hope that sharing my experience and opinions with the world will make a difference to someone. How is that any better or worse than writing myself into a Mary Sue fic?

Maybe part of the reason we hate reading Mary Sue fics now is because they remind us of the very first fics we ever wrote as teenagers (admit it, we’ve all written a Mary Sue fic or seven). While it’s true that a large number of Sues are written by first-time ficcers, the fic community might want to consider helping new writers grow through constructive criticism instead of off-handedly dismissing the fic as a Sue. All other characters in fic are subject to personal scrutiny, so why not leave detailed notes about what could improve the story beyond “Oh, she’s a Mary Sue?” Suggest the need for growth in the main character; a more conflicted love story; better female friendships. Don’t forget, we were all that first-time fic writer once! Being too dismissive of Mary Sues also discourages girls from writing strong, original female characters, and that’s the last thing we need in fiction. Also – it might be worth questioning why we suddenly become so embarrassed about a character that’s basically just a perfect, super-beloved version of us.

Because the Sue is always “perfect,” what exactly makes us hate her so much? Is it that she doesn’t have any flaws? Or that she has the wrong kinds of flaws? Or too many flaws? That she cries all the time and needs to be comforted? That she’s incredibly-powerful and no one can defy her? Is it that she’s way too nice to everyone? Or she’s the most anti-establishment of all the angsty girls on the scene? I’ve seen Sues dismissed for all of these reasons, which honestly makes it seem like we’re just dismissing all original female characters outright. The Sue breaks women out of the nice corner in which lady characters often exist in fiction, and that makes people uncomfortable. Let’s not be those people, okay?

Learn to love the Mary Sue. She’s the best version of all of us, and I hope she takes over all forms of fiction. Batman, you better get out of the way.

The Fangirl’s Guide to the Galaxy is available today (!) from Quirk Books and at all places where books are sold on the internet or IRL. It would be cool if you got one.