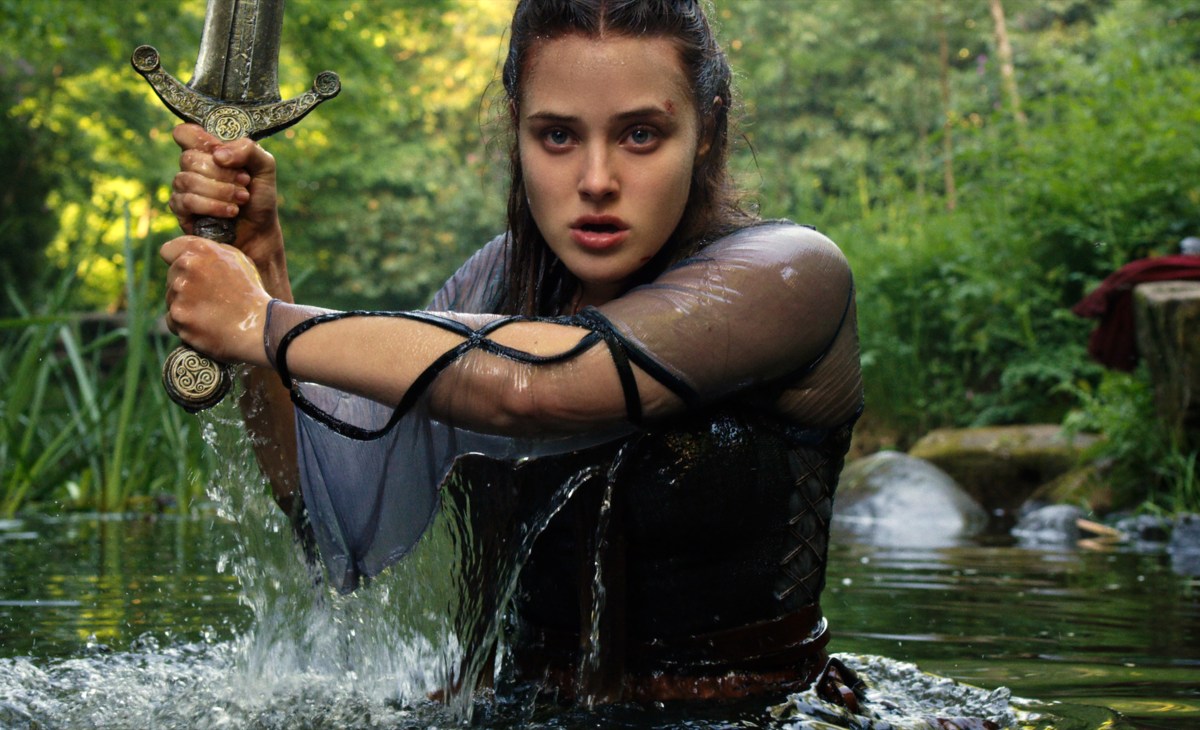 This week, Netflix released the first look at Cursed, a new version of the King Arthur Legend starring Katherine Langford as Nimue, “a teenage heroine with a mysterious gift who is destined to become the powerful (and tragic) Lady of the Lake.” It’s just the latest in a long ling of Arthurian series and movies, and its promise to tell the tale of how Nimue becomes some sort of rebellious leader against King Uther and his “Red Paladins” makes me feel more tired than excited.

That’s because it’s so hard to do a King Arthur story well. Good adaptations of the King Arthur myth to screen are far out-numbered by the unsuccessful ones. For every Camelot, the musical movie with Ricard Harris, there’s a Camelot, the god-awful Starz series with Eva Greene and Joseph Fiennes. For every Merlin, the BBC series, there’s a Merlin the mini-series with Sam Neil. Flops like Excalibur, First Knight, King Arthur: Legend of the Sword, The Mists of Avalon, and that other King Arthur, have piled up over the years with classics like Monty Python and the Holy Grail being the rare exception.

Why is this? It’s extremely clear that King Arthur and the Knights of the Round Table are a foundational myth that we can’t get enough of, so why is it so hard to an adaptation get right? There’s not even, I would argue, a definitive version of the full story on screen despite so many tries. My theory about why revolves around the fact that the main story of King Arthur is inherently tragic, full of characters that are, if not unlikable, certainly make bad choices or endure fates we don’t enjoy by the end of the story.

The first part of King Arthur’s story is great. It’s the quintessential chosen one narrative where a plucky young boy finds out he’s destined to be king and is set on a course to greatness. There’s magic and destiny, the call to adventure, and that’s all neat and hopeful. It’s why The Sword in the Stone is a fun, second-tier Disney: it’s about what comes before Arthur begins to rule. When you get into the meat of the legends though, that’s always where things tend to get into the weeds.

There are dozens, if not hundreds, of versions of Arthurian myth, but one aspect that’s pretty much agreed on is that Arthur’s reign ends very badly. His ideals fail in the face of evil. In most versions of the story, Arthur has an incestuous child, Mordred, with his sister, Morgan le Fay. Mordred challenges him and kills him, and Arthur’s wife, Guinevere, cheats on him with his best friend and bravest night, Lancelot.

The story of Arthur is a tragedy and it’s in high contrast to the fun and magic of the start of things. Telling the full story of King Arthur and his court requires getting the audience to like and root for characters at the beginning of things who ultimately cheat on or betray one another, or who are doomed to die tragically seeing all they believed in crumble. It’s like starting a series in the mode of He-Man, then seeing it become Game of Thrones in the third season, then watching it end with everyone dead.

This is part of the reason that many of the most successful retellings of the Arthurian myth are ones that don’t try to do it as a straight-up drama or action film/series. They play with it. Monty Python and the Holy Grail is great because it’s an absurd comedy, Lerner and Lowe’s Camelot works because it’s full of fantastic music and is meant as a tragic romance. The Sword in the Stone works because it’s a kid’s movie.

Another key to possibly making your Arthurian property work is to not make it about Arthur. The Mists of Avalon (the book, not the terribly executed mini-series) was successful because it focused on the women in the story, especially the ones who have been vilified and done dirty for centuries and since the survived, there was hope at the end. (And yes, I will acknowledge here that the author of that book is an alleged monster and abuser, as per her own children). The BBC’s Merlin not only put the focus on Merlin the Wizard, but threw a lot of Arthurian myth out the window and gave us some great female characters, especially a version of Guinevere we could root for (if you weren’t a racist POS).

We could call this the Titanic solution. We know the overall story will end sadly for most everyone, but if we can get behind one character the might survive it all, we can maintain both hope and tension for the audience. Will its focus on Nimue help Cursed? Or will the fact that even the peripheral characters in Arthur’s court and life seem destined for a tragic end hobble the series?

It’s always tough to watch something where you know it’s going to end badly, and it’s even harder for creators adapting that story to do so when their ending is written for them and it makes everyone either a victim or a tool. It’s never rewarding to get invested in Guinevere or Lancelot knowing what they’re going to do to Arthur.

The lure of King Arthur has always been the adventure and magic, but the greatness of the story is its tragedy. Arthur is about the rise and seemingly inevitable fall of dynasties and power, how ideals and peace can be so easily lost. It’s a story that, because readers want hope, has no end, only the promise that Arthur will come again to rule because otherwise, the conclusion is too bleak. It’s a messy story, and it’s still so hard for modern authors to tell all of it.