Why Is Feminism in Fantasy So Important? | The Mary Sue

Why Is Feminism in Fantasy So Important?

Because sometimes you need more than "it just IS, okay?" 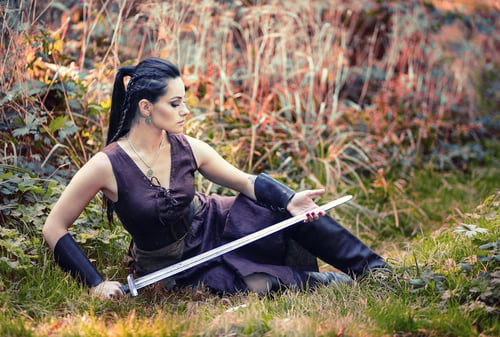 Have you ever been in a situation where a conversation heads into a topic you are so passionate about that you can’t actually express your feelings on it? A topic you have spent so much time thinking about, so much time raging about (often within the confines of your own skull) that when another person turns to you and says “So why is this such a big deal anyway?” you find yourself unable to speak?

That’s the reaction I had when I was asked if I could write about the importance of feminism in fantasy. All I could think of when I sat down to write it was “Look, it just IS, okay?” Which is pretty useless. Especially when it’s a post for The Mary Sue. (Editor’s Note: Awww, shucks.)

The thing is, I am so passionate about this and have spent so damn long thinking about it–and writing the Split Worlds series of books to explore it!–that when I came to try and express it in some pithy way, I was paralyzed. And it’s not like I’m trying to persuade people who think the Bechdel-Wallace test has something to do with cheese from an obscure part of France. I’m here, talking to people whom I suspect already know why it’s important.

Cue panic. (I don’t need much to send me into a flap, especially in the run up to a book release.) So I did what could be considered unwise: I went to Facebook.

It’s not my preferred port of call in a flap about writing about feminism, but in recent months a little nook has been created there for the people who played in the Split Worlds Masked Ball Live-Action Roleplaying (LARP) event in May. (Basically, I hired the Guildhall in Bath and, along with an amazing lady named Katie Logan, gave about 80 players the chance to be characters in the world of my novels for an afternoon tea and then masked ball. There was even a duel!) The Split Worlds LARP group is literally my favorite place online now. It’s populated with people who are my tribe: LARPers who feel very passionate about feminism and roleplaying and evil Fae. I mean, what’s not to love? They are the most supportive, thoughtful, brilliant people and I am so glad they are in my life.

So I go there, fretting about writing this post and say something along the lines of: “HELP. Feminism in fantasy, specifically in the Split Worlds series. Why is it important? Thoughts? Feels? Go!” (It was more British and rambling than that, with a couple of apologies, but you get the gist.)

The aforementioned Katie (who runs an awesome Tumblr called Ladies Who LARP) sympathized with this paralysis and said this:

“Representation combined with escapism. Reading about ladies I can identify with getting to do awesome things. A friend of mine, Zoe McAuley, recently said regarding LARP: ‘When LARP is escapism, it isn’t from being miserable, it’s from being helpless.’
Also: the feminism in Split Worlds is important because it reminds us how important it *still is* in the real world. It reminds us how things were not so long ago, and how everything we have now was fought for.”

When I started writing the Split Worlds series, I thought that having the heroine trapped in a secret magical reflection of the real modern world, where social expectations are closer to those of the nineteenth century and women are treated as chattel, would effectively be a way to explore the patriarchy writ large. A prominent male character in the series enables me to explore the ways a rigid, choking patriarchal society can damage men as well as women. The society of the Nether is populated by men that say the most appalling things to and about women, and to have the real, modern world butting up against it creates a rich playground for me as a writer.

I confess, what Katie said in her comment made me grin. It was always my hope that what Cathy goes through in the Split Worlds series would have this effect, and let’s face it: in a world with GamerGate, Trump, the dialing-back of women’s rights in many states in America and some of the absurd drivel that’s been spouted since the Brexit farce here in the UK, this stuff is still damn relevant. If history shows us anything, it’s that when we fight to gain ground in women’s rights, none of us can rest once that’s been achieved. The patriarchy is still just as strong, toxic and influential as it ever was.

Living through this in the real world sucks, and truth be told, I consume most of my books, films and TV to literally escape from that. I worried about whether putting my protagonist through feminist hell would make my series horrible to read. In fact, this comment popped up in the FB conversation from Nick Bradbeer:

“Reading Split Worlds left me with a skin crawling feeling of horror at the idea of being trapped in that situation, and then the realisation slowly dawned that actually – quite a lot of women ARE in situations not dissimilar. Which, as a somewhat oblivious and very privileged guy, I’d never really had to confront before. That was quite powerful.”

And Tom Garnett replied: “Hm, yes. This. I found it a really hard read in places (I don’t honestly know if I’d have finished in any sort of reasonable time if not for the impending events), but this realisation is precisely why.”

There’s been some discussion in the media about how reading can increase empathy. When it comes to feminism, the encouragement of empathy from men on how it feels to be a woman in a patriarchal society, and empathy from women on how much pressure there is on men to act in a certain way (usually to the detriment of women) could only do good, surely? Perhaps I am a naïve optimist, but I do believe that exploring feminism in fiction can open readers to experiences they simply won’t normally have because of their gender (of course, the same goes for race and religion and many other things). An increase in empathy surrounding these issues can only be a good thing.

There’s another reason I felt exploring feminism was important in my series; Cathy does not fit in. And I know we’ve had bajillions of outsiders and loners and “the one who doesn’t fit in and turns out to be super cool” stories. Cathy is not super cool. She doesn’t fit into the narrow little box that society has allocated for her and she gets enraged by it and she screws up. Again and again. I really wanted a flawed character that people could see something of themselves in. There is a global conversation about feminism that has been going on for decades and it’s complex and difficult. It can be intimidating when you stumble into that, having just “woken up” yourself, and want to say and do things about the injustice of it all when there are so many people shouting and raging – not just at the patriarchy but each other too. Cathy is that person stumbling in, without any plan, without any idea what to do. All she has is that burning rage at the fact she is supposed to just accept the role being imposed upon her. And that’s before we even get to horrible Fae interfering and being caught up in the machinations of dodgy sorcerers.

I want to leave you with this comment from Josie Adam who answered my question why feminism is important in fantasy with this:

“It’s important to me because fantasy is a genre that, on the whole, has been largely male focused. A lot of it has drawn inspiration from the LOTR books – where female characters are clearly not the focus.

It’s a world where literally anything can happen… and I am so tired of books that just do the same old “men are in charge, no-one questions it, the entire plot is focused around men”. It’s been getting better with modern books released in the last few years… but it’s nowhere near perfect.

It’s fantasy. Women deserve to be able to have that fantasy as well.”

We do. Hell, consciously giving women equal prominence in fantasy feels like a feminist act in itself. We deserve more, we deserve better and we have always been here, reading fantasy, writing fantasy. These are our stories too.

Emma Newman writes dark short stories and science fiction and urban fantasy novels. She won the British Fantasy Society Best Short Story Award 2015 and Between Two Thorns, the first book in Emma’s Split Worlds urban fantasy series, was shortlisted for the BFS Best Novel and Best Newcomer 2014 awards. Her first science-fiction novel, Planetfall, was published by Roc in 2015. Emma is an audiobook narrator and also co-writes and hosts the Hugo-nominated podcast Tea and Jeopardy which involves tea, cake, mild peril and singing chickens. Her hobbies include dressmaking and playing RPGs. She blogs at www.enewman.co.uk and can be found as @emapocalyptic on Twitter.