The (New) Canonical Reason Why Halo‘s Cortana Is Naked 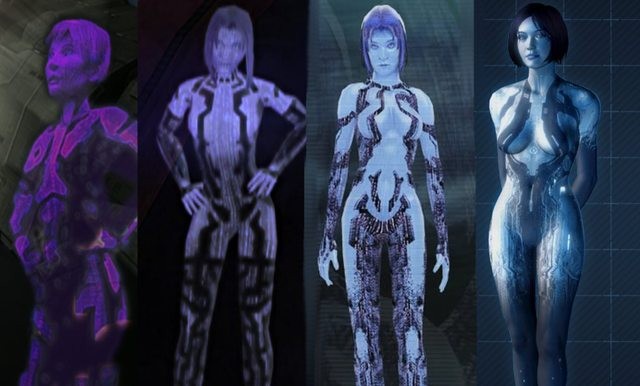 Today, Halo franchise director Frank O’Connor offered a new canonical explanation for why Master Chief’s AI companion and Tinkerbell analogue Cortana chooses to render herself as a nude woman, especially given that all of the other AI constructs in the game render themselves in more substantial outfits (also, all of the other AI constructs render themselves as dudes). I stipulate that O’Connor’s explanation is “new,” because I already remember an interview with former Bungie employee, artist Lorraine McLeees, from over a decade ago. The story McLeees told back in 2003 about Cortana’s creation went like this.

It seems that videogames studios are mainly made up of a bunch of guys, and the women in their games are perhaps portrayed in the way they themselves see women. Here, the same 3-D artist who wanted to not portray women as sex objects to be ogled and drooled over, coincidentally, modeled Konoko and Cortana. Never mind that Cortana was basically a naked hologram! For her action figure, it was important that she didn’t look too young, as she did in the game, so she became a little buxom. I’d requested her to not be as buxom, but somehow, the sculptor just didn’t want to make that change. We ran out of time, and there we go. [shrugs]

The Halo artists went on to illustrate Cortana as more and more buxom over the years — and this has not escaped the notice of Halo fans, one of whom created the above image reflecting Cortana’s growth spurts in game after game. After I saw Cortana’s redesign in Halo 4, I wrote about her presentation in-game, from her “choice” in outfit to her seemingly suggestive relationship with Master Chief — a relationship made all the more bizarre given that her AI brain is a clone of a woman who’s often presented as a mother figure to Master Chief. So, in addition to being Peter Pan-inspired, the Cortana/Master Chief story also seems to have some Oedipal influences.

Anyway, let’s look at the latest explanation for why Cortana “chooses” to dress in this way. In an interview with Games Radar, O’Connor explained:

One of the reasons she does it is to attract and demand attention. And she does it to put people off so they’re on their guard when they’re talking to her and that she has the upper hand in those conversations.

It’s kind of almost like the opposite of that nightmare you have where you go to school in the nude, and you’re terrified and embarrassed. She’s kind of projecting that back out to her audience and winning intellectual points as a result.

Later, O’Connor admitted that this was not the original reason behind Cortana’s design — merely the one that the team had tried to retroactively use to justify her outfit.

That’s not why she was designed like that. That’s how we’ve backed into our fiction. But that’s the conceit and that’s why she does it. She expresses that in her other behaviours and we’ve invested in that aspect of her persona.

In other words, the current team at 343 looked at the history of Cortana and — based on what little information they had — tried to come up with a logical explanation for why this woman has rendered herself in the nude this whole time. The old explanation, which seemed to be “the guys on the original design team liked it,” would not suffice as an in-story canonical explanation … although it does seem to be the actual explanation.

So, now the 343 folks have had to retrofit an explanation onto this fictional character, so as to make it seem as though she had the agency in her aesthetic decision. Within the fiction, Cortana chose this outfit and this appearance, and now (we’ve learned) she likes using her appearance as a means to distract people, catch them off guard, and so on. It’s not just that she personally likes how she looks — it’s also that she is using how she looks to her advantage when it comes to other people. Remember, she has complete control over everything to do with how she looks, from her outfit to her non-corporeal body. (Except for the part where she doesn’t have complete control. Because she’s a fictional character made by a mostly-male design team. But we’re supposed to forget that part. Of course.)

This is an element of design with regard to fictional female characters that always trips me up to discuss, because it feels like a pretzel knot of discomforting and contradictory problems. I believe that women — real women, in real life, not fictional women created from the ground up by predominantly straight dude designers — have the right to wear whatever they want, including nothing. Women should be completely safe walking the world in the nude without their bodies being inherently perceived as sexual, inherently perceived as on display, and inherently available for (it’s presumed) men. We live in a society where women’s bodies, especially their naked bodies, are rendered “sexual” against their will — and the more conventionally attractive a woman happens to be (e.g. the larger her breasts), the more inherently sexual her body is perceived as being. Again, this happens whether women consent to it or not. And that’s just one symptom of a much larger problem.

Cortana has come to represent that problem for me — today more than ever. We are being told, retroactively, that she has chosen to appear this way, and my gut wants to defend her right to render in whatever way she chooses. But I also know that her original designers — and perhaps even her current designers — don’t see Cortana the same way that I do. O’Connor in this interview suggests that, definitionally, a naked female body will catch people off-guard and give Cortana the upper hand intellectually. This is a sentiment that I hear expressed often, and it’s a dangerous one; it suggests that there is something about the female form that is not only inherently sexual, as I’ve explained in the previous paragraph, but also that looking upon a woman could cause people to lose control of their faculties. And yet women are supposedly the ones “in control” of that situation? In real life, it doesn’t typically play out that way!

The idea that women can use their sexuality to their advantage is an age-old line of thinking that relies on and perpetuates the idea that women are not equal participants in the world of sexuality — they are the “sellers” while straight men are positioned as the “buyers.” (And yet, women are repeatedly shamed and discouraged from ever taking advantage of this systemic inequity, which is why sex work is illegal in so many parts of the world — unjustly so, in my opinion, but that is an argument for another time.) This double standard is so pervasive and so ingrained that it seems almost impossible to imagine what it would be like to live in a society without it — but ideally, each partner in any relationship would have equal right to both be “the chooser” and also “the chosen.” Unfortunately, that’s not how gender roles work right now; that’s not how we’re all socialized to behave. We do not live in a perfectly equal society, so even the very concept of “choice” is a fraught one.

As a result of all of that, I guess you could that that is the real explanation for Cortana’s rendering choice. She knows, deep down, that even though she lives in a far-flung sci-fi future, it’s still entrenched with systemic sexism. She has ascertained that women are considered valueless as anything other than sex objects, still, even in her world. She knows this, and so she uses this. She takes advantage of a broken system, because it’s all she can do. And perhaps she even does her best to enjoy it, because she knows also, deep down, that she is not valueless. Even though her worth is only determined by her appearance, she knows she is significantly smarter than everyone around her. And that she is playing them. And that they don’t even know it.

Of course, that’s not actually part of the fiction of Halo at all, and I’m not sure that O’Connor’s quotes come even remotely close to indicating that perspective within the fiction — that complex, nuanced narrative of working within oppression, as best one can. Instead, Cortana is presented as being part of the experience that you, the player, have purchased. Her Tinkerbell-esque love and devotion to you are part of the package. Her unwavering guidance never lags, and even when she’s on the verge of death, she puts you first. And she’s naked. That’s Cortana, by design.

I’m just not sure that’s what she would choose.

(via Eurogamer, image via Imgur)