But there sure are a lot of them.

Are women funny? Are black comics funny? These are both questions I hear discussed fairly regularly, usually at comedy shows, usually by white male comics.  It’s kind of a topic I’m sick of hearing about, because it’s stupid to make assumptions about someone’s comedy based solely on gender or race—especially because white male comedians aren’t funny.

What about [insert name of white male comedian]?

Oh, sure, some white male comedians are funny. You could find some examples of funny white guys, but that doesn’t mean they’re all funny. I just mean generally they’re not funny. If you go to a comedy show and all the comedians are white dudes (the chances of this are pretty good by the way) you can pretty well guess what the topics discussed are going to be. You could probably even make a BINGO card. 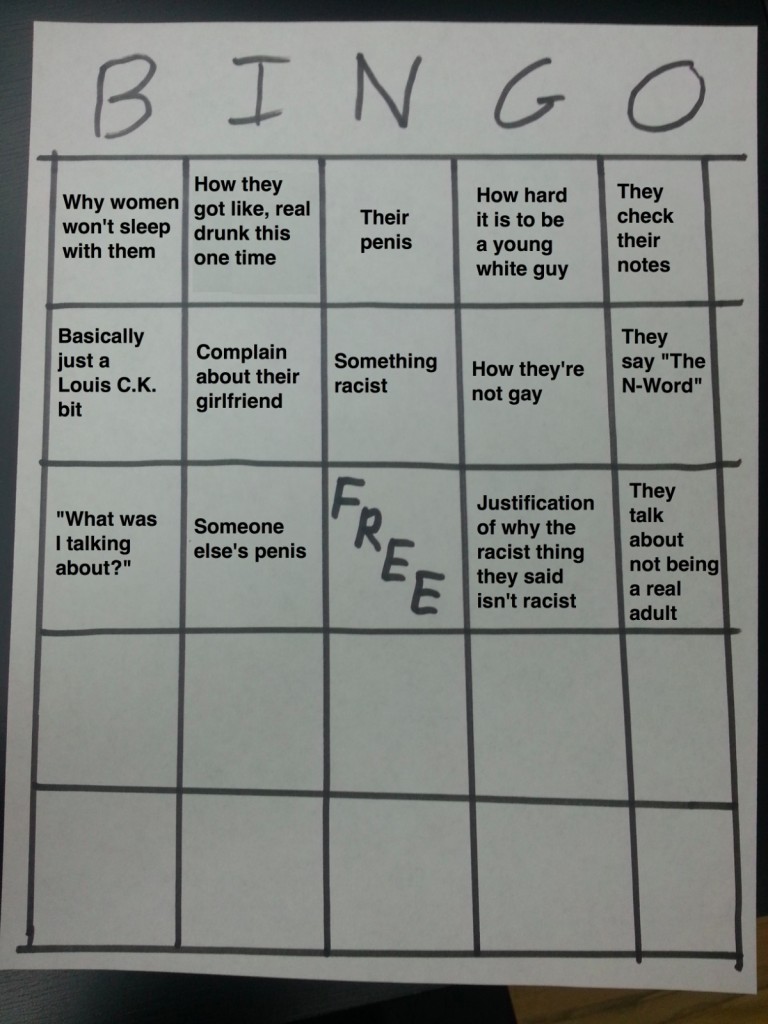 I left a few blank so you can fill in your own. Have fun with it in the comments.

You’re just talking about stereotypes. Not all white dudes talk about that stuff.

Like I said. Some white male comics are probably funny, but I’m willing to bet if you bring that BINGO card to a show tonight you’d fill it up pretty quickly. Especially if you go to a showcase where a bunch of comics perform on the same stage. Often times you’re at a showcase because you want to see one specific comic, but you end up seeing ten comics and they’re probably mostly white dudes.

All I know is I’ve seen a lot of comedians perform. If I’m watching a show that’s all white guys, I’m probably not going to like that show very much. Maybe someone else will think they’re funny, but it’s just not for me.

And… scene. The above is all satire—except the premise that I’m sick of hearing people talk about whether or not women or POCs are funny. I am a white male comedian, and this is something I hear people and other comics talk about a lot, and I would like them to stop. It’s a stupid premise for a topic of conversation.

Of course most women or POCs aren’t funny, because most people aren’t funny. (White dudes, that includes us too.)

Comedy is hard. It’s why comedians get paid to make people laugh. Not everyone can do it. Fewer can do it really well. I’ve seen the shit women and POC comics have to put up with from both audiences and other comedians. Comedy is hard for everyone, but by comparison it seems like I have an easier go of it than some of my not-white-dude comedian friends. That’s not me saying I’m funnier than they are—at all. That’s me saying audiences don’t make the same assumptions about me when I step on stage that they do of those other comics.

We like to put things in groups to make them easier to judge. If you’ve seen a bunch of action movies you didn’t like, then in the future you’ll probably avoid seeing more action movies. That’s fine, but trying to make those kind of general assumptions about whether or not you’ll like a comedian based on their race or gender is stupid, because comedians aren’t action movies. Comedians are people.

The best comedy (in my opinion) is personal. It looks at how that individual experiences the world, and how they relate those experiences to the audience. Hearing about the experiences of someone of a different gender or background can be enlightening and really funny.

The worst comedy (in my opinion) lacks that personal quality and just makes the easiest joke possible. It’s easy to play on stereotypes. It’s easy to punch down. Anyone can get on stage and recite the racist joke their uncle told them.

There are plenty of bad comedians, but they’re bad because their material is bad or they’re bad at telling it, not because of their gender or skin color.

So, come on, everyone. Enough already.