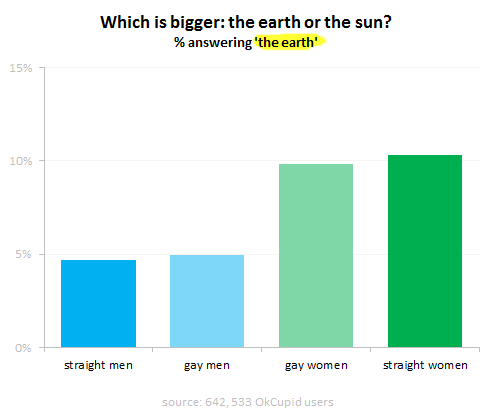 From OKCupid’s recent post on the differences between straight and gay sexuality comes this question with an inexplicable gender gap: Which is bigger: The Earth or the Sun?” About 5% of men say “the Earth”; about 10% of women say “the Earth.” Christian Rudder:

Down in the database I discovered one question with a surprising disparity, not between orientations, but between genders. Like Frodo to the Balrog, I wished I’d never unearthed it.

642,533 users is a robust data set, and OKCupid has a reputation for approaching number-crunching earnestly and professionally, even if they use their wealth of data to address oddball or controversial questions. Without resorting to ugly gender-based name-calling, how do you explain this? Do any appreciable number of these people across genders actually believe that the Earth is bigger, or is this some mix of trolling/irony/people being drunk when they’re answering OKCupid questions? Do some small number women think that it makes them more desirable to men to act ‘ditzy’ and ignorant of such basic facts? How, then, to explain the similar result among gay women? Many mysteries.

Christian RudderEarthOKCupidsunWhich Is Bigger The Earth or the Sun