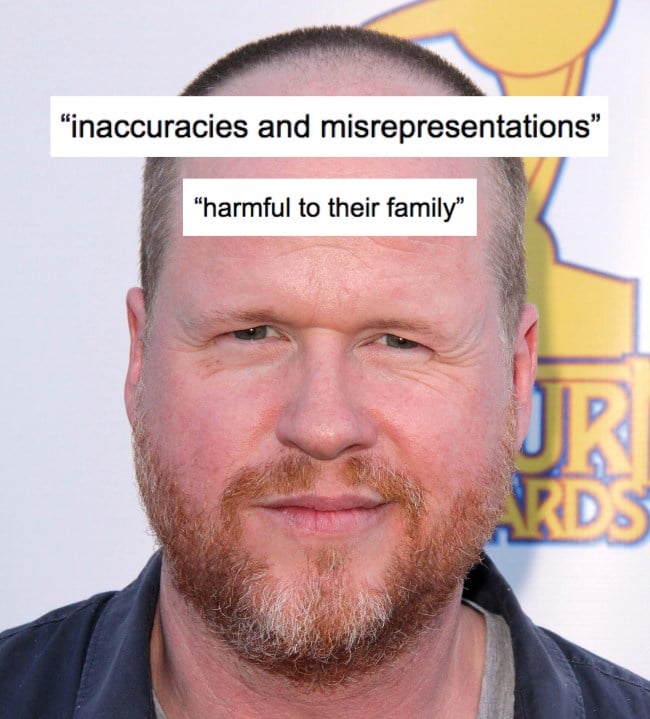 After The Wrap published a blistering essay from Josh Whedon’s ex-wife Kai Cole that exposed what she says were years of his cheating and feminist posturing, Joss Whedon’s spokesperson issued a response. It was not a great response.

The Wrap updated its article with the addendum from Whedon’s camp:

Editor’s Note: A spokesperson for Joss Whedon provided the following response, “While this account includes inaccuracies and misrepresentations which can be harmful to their family, Joss is not commenting, out of concern for his children and out of respect for his ex-wife.”

This amounts to a quite public gaslighting of Cole’s claims. If we take the simplest explanation of gaslighting as “a form of manipulation that seeks to sow seeds of doubt in a targeted individual or members of a group, hoping to make targets question their own memory, perception, and sanity. Using persistent denial, misdirection, contradiction, and lying, it attempts to destabilize the target and delegitimize the target’s belief,” we can apply it directly to how this statement is constructed.

Asserting that Cole’s account “includes inaccuracies and misrepresentations,” but not specifying them, the statement is suggesting that anything—or everything—presented in the essay could be untrue or misremembered. It seeks to put the entirety of Cole’s essay on shaky ground. It might as well have said, “She isn’t recalling it correctly. It didn’t happen like that.”

Further, taking the time in such a brief, curt response to call out theoretical “inaccuracies and misrepresentations” as “harmful to their family” casts Cole into the role of a villain while at the same time trying to give Whedon the higher moral ground, by claiming that he “is not commenting, out of concern for his children and out of respect for his ex-wife.” That’s bullshit, because the first part of the statement sure as hell constitutes a comment from Whedon.

Most certainly, Whedon was upset about Cole’s essay. But the classy thing to do in this case—the true better road to take—would have been to simply have his spokesperson relay the statement’s latter half. “Joss is not commenting, out of concern for his children and out of respect for his ex-wife.” Clear, clean, to the point, and it casts him into a more generous light. Hell, even “no comment” would have more than sufficed here. Whedon’s silence on the matter would have been understandable. Far less so is this underhanded undermining of his ex-wife’s essay, which forwards a long and dark tradition that women are not to be believed or be seen as reliable narrators of their own stories.

The attempt to attach doubt to Cole’s claims—to her lived experience as she reports it first-hand—is unhelpful to the conversation at best and deeply troubling at its heart. Whedon should be ashamed that this is now on record as his public reply. And if, somehow, that first sentence sprang fully formed from the mind of Whedon’s spokesperson without his input, that person should be fired.

(via The Wrap, image: Shutterstock)