What We’re Missing by Banishing Barbie 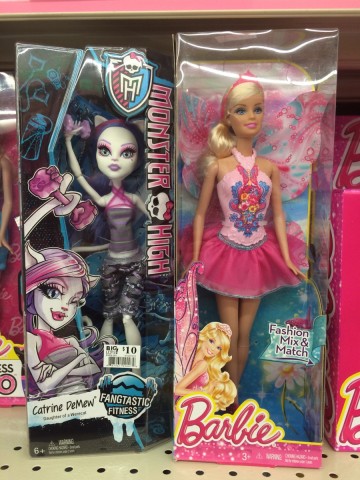 We’ve all heard it: Barbie promotes unrealistic body image that harms young kids, especially girls. Her proportions are anatomically exaggerated, and she’s never to be seen without feet arched into heels and a full face on. (Disclaimer: Flat-footed versions were introduced as a part of a new line this year.) If you grew up with this surgeon-firefighter-fashionista extraordinaire, you may still hold attachment no matter what feminist introductions everywhere have to say. And that’s okay! A war on Barbie isn’t the solution to our desire for healthy family-friendly media. What we need is an ongoing conversation about toys, how they affect us, and how to keep them a positive part of our worlds.

Over the past several years and 2015 especially, Barbie has expanded outward to include more skin tones and varying facial features, albeit usually subtle ones. Also in this time, she’s taken a backseat to toy lines such as Monster High and Ever After High, easily found in retail stores everywhere and coveted by kids and collectors alike. These dolls are much thinner, with larger heads, bigger eyes, lips, and an almost imperceptible difference between features on white and POC-coded faces. (It was not until I took photos up close to research this piece that I noticed at all.) While the line’s premise is “accepting your freaky flaws,” there is little in the way of real-world applicable representation. A focus on Mattel’s earlier project would leave us believing incorrectly that the fashion doll world is heading in a wholly progressive direction. That view leaves us out of touch with modern kids.

I was inspired to write this article when I had browsed the fashion doll isle in a local toy store. I spent some time checking out the Monster High paint jobs and outfits and turned toward a selection of Barbies. Upon first glance, my brain registered them as wonderfully proportioned, realistic examples for kids—maybe an inclusive new line of toys aimed at girls was being introduced? No, I had just adjusted my standards to what I’d been looking at moments ago. I was accepting the norm in fashion dolls as something even farther off than before. Despite my understanding of both toys and media representation, I was fooled. Where does that leave kids, who must work with what is presented to them?

I think one of the reasons that toys like this get away without much backlash is because they look so exaggerated that we are inclined to think of them as alien—too far off to even think to compare oneself to. But we cannot assume kids will feel the same way, or that it isn’t having a subconscious effect. That’s why talking to them about what they take in is so essential, even if they aren’t acting like they need it. Breaking down the inconsistencies between media and the real world is good for us, too; no matter how much we know, it’s nice to have a reminder that comic book female anatomy is ridiculous.

A fun fact: The same corporation is behind Monster High and Barbie. We know that brands will sell what they can sell, and what sells continues to be fashion dolls that could be better. Social media makes it easier than ever to provide feedback on changes we really want and let companies know what we are and are not willing to purchase. We can support positive changes, like the new diversity of Barbie, to show them what we want. We can choose to buy toys that kids will see themselves in, and that’s awesome. But what do you do when they’re dying for the latest doll you don’t quite love?

The truth is that media is problematic. Rarely is representation perfect, and there’s no way to filter out all the bad from the good and fun. There’s nothing wrong with enjoying content with flaws, or seeing where it does do well—personally, I’m in awe of all Barbie’s career options and draw creative inspiration from the way fashion dolls meld concepts into outfits. Trying to prevent kids from enjoying something they really want does little for anyone when they’ll get the same impact watching their friends enjoy it instead. While seeking out the best representation is great and so is avoiding introducing the worst of it to kids, we can’t present them with nothing but flawless media. What we can do is help them understand it.

Madison Mona is an artist, writer, and proud Autistic who’s always up for talking representation in media. They are available for articles and anthology pieces at[email protected].