What Is 'Bad Times at the El Royale' About? | The Mary Sue

What the Hell Is Bad Times at the El Royale About? An Investigation

Bad Times at the El Royale is a mysterious movie starring a hotel as well as some extremely attractive and famous people like Chris Hemsworth, Cynthia Erivo, Jon Hamm, Dakota Johnson, and Jeff Bridges. But what on earth is happening?

Seven strangers, each with a secret to bury, meet at Lake Tahoe’s El Royale, a rundown hotel with a dark past. Over the course of one fateful night, everyone will have a last shot at redemption … before everything goes to hell.

Definitive details about Bad Times at the El Royale are being kept under wraps, as the movie seems to revolve around the characters not being what they seem to be. The El Royale is a fantastically atmospheric hotel situated on the Nevada/California border, with a line drawn down the center demarcating the divide between the states. When you’re a guest at the El Royale, you can stay either in Nevada or in California. “Both sides of the hotel have kind of unique personalities,” Jon Hamm explains in a recent featurette.

While the lodgings are not quite as foreboding at first glance as The Shining‘s Overlook Hotel, it’s clear that events at the El Royale are going to fast escalate into the bizarre. In the trailer, you can see that there are back corridors running through the place where two-way mirrors enable spying on the guests in their rooms. And congenial beginnings appear to devolve into murder, stand-offs, hostage situations, heists with weird scary masks, and a whole lot of shotgun-wielding.

Bad Times at the El Royale is written and directed by Drew Goddard, whose directorial debut was The Cabin in the Woods. Goddard’s history is steeped in speculative fiction writing and direction, which leads me to speculate that there could possibly be otherworldly elements at play in El Royale, though it is being billed as “mystery/thriller.”

Goddard wrote the adapted screenplay for The Martian, as well as the scripts for Cloverfield and World War Z. He got his start writing for TV shows like Buffy the Vampire Slayer, Angel, and LOST, and he created Daredevil for Netflix. He’s been announced as the director for the upcoming X-Force movie. Considering Goddard’s background, it’s not hard to imagine that something sinisterly supernatural lurks behind the chaotic hotel happenings. 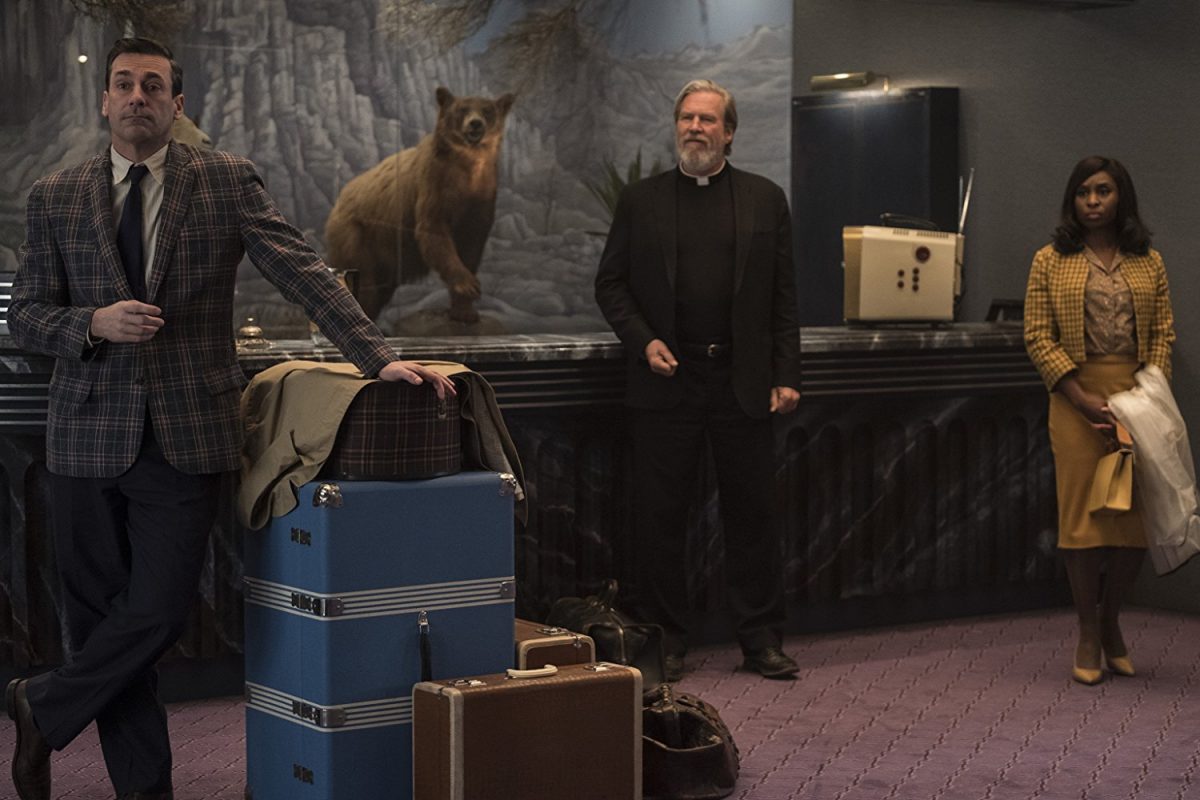 On the surface, however, what we know about the characters involved seems pretty mundane, even if some of them are cult leaders and fake priests. Dakota Johnson is playing a Southern woman named Emily Summerspring, with Cailee Spaeny as her younger sister, named on IMDb only as “Emily’s Sister.” Cynthia Erivo’s character is called Darlene Sweet, and she looks absolutely fabulous in yellow.

In an inspired bit of casting since I would follow him anywhere, Chris Hemsworth and his bare chest are playing a cult leader named Billy Lee. The great Jeff Bridges is playing a priest who’s not a priest by his own admission, Father Daniel Flynn. Jon Hamm is playing the well-monikered Laramie Seymour Sullivan, a “salesman” who seems much slippier than Don Draper. Parks & Rec‘s Nick Offerman is playing a trenchcoat-clad, pistol-holding character with no name recorded on IMDb at all. The Good Place‘s Jason Mendoza, Manny Jacinto, is on the cast list, which affirms for me that the movie’s casting folks knew exactly what they were doing and should win awards.

Beyond the intriguing mysteries and the coy refusal to give any coherent plot points away, what I already appreciate about this film is its seeming playfulness comingled with violence, the breathtaking design and art direction, and the winking self-awareness. El Royale knows what the people want. Much of the movie’s promotion has zoomed straight in on the partially-clad Chris Hemsworth and lingered there. Sometimes he is pictured in the rain. 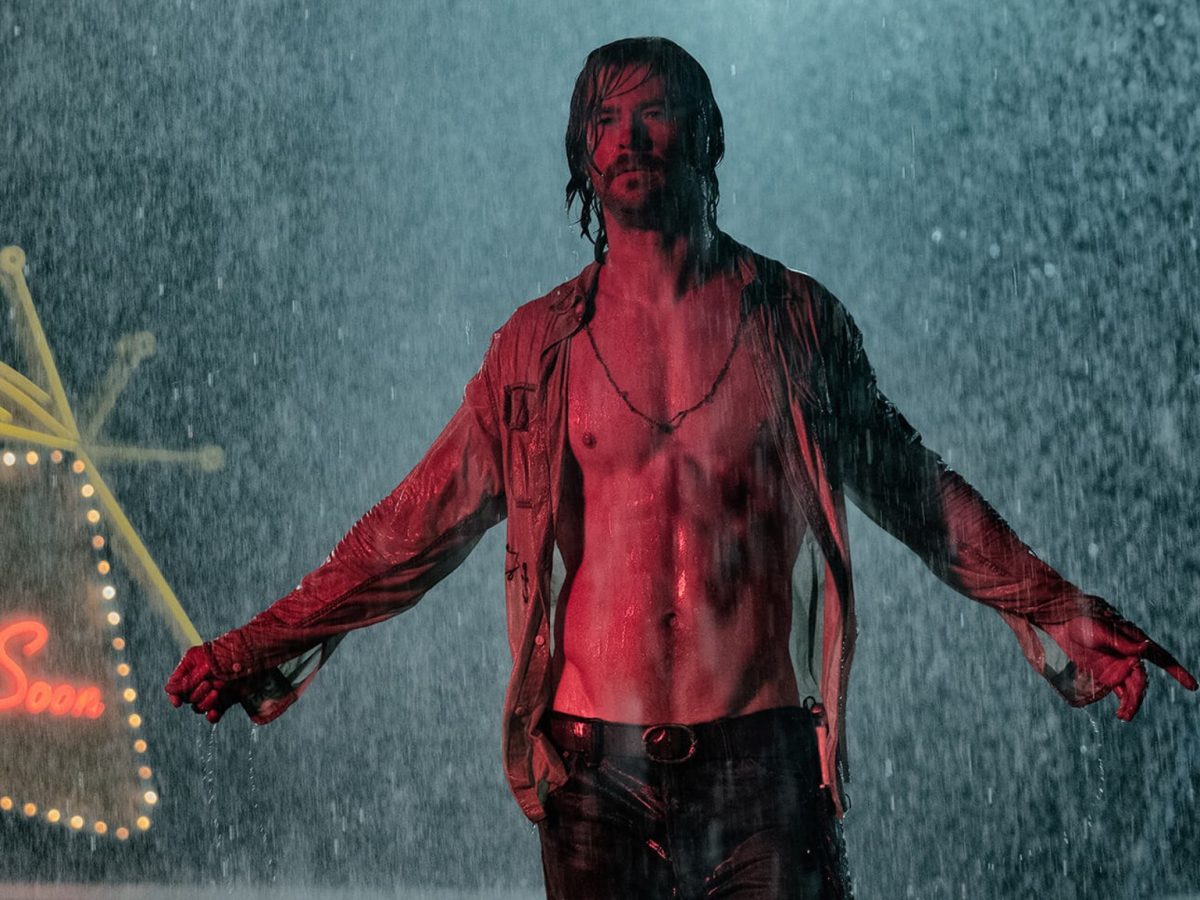 Sometimes Hemsworth’s Billy Lee is walking through golden fields leading his people and lacking any sort of shirt. That beaded necklace is already iconic. 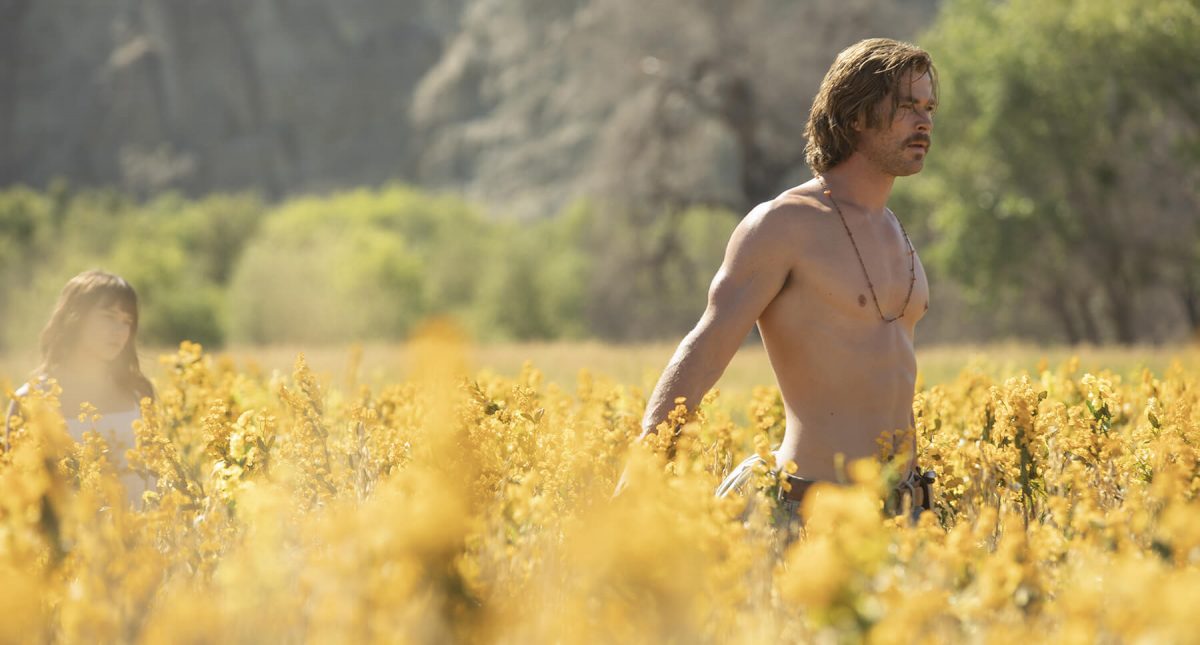 “I think it was a really big mistake to have him take his shirt off,” Dakota Johnson told Entertainment Tonight. “Because it’s all you can look at. It’s so astonishing. It’s really impressive.” And, Johnson teases, “He may or may not do a little dance of sorts. And it’s so, so spectacular.”

Sorry, I seem to have lost my train of thought. I may be English majoring it up here, but I can’t help thinking that the language used in the movie’s official synopsis is providing some hints. All of the characters have “a secret to bury,” and “everyone will have a last shot at redemption” until “everything goes to hell.” That’s three references to death and the afterlife; maybe the El Royale is a sort of purgatory, though considering Goddard’s LOST history he’d likely steer clear of that sort of reveal. Even so: “All roads lead here” is the tagline. Hmmm.

Everyone has a complicated backstory. No one is who they appear. Watch this EXCLUSIVE look at #ElRoyaleMovie – opening at AMC Theatres October 12! pic.twitter.com/2ym2JouXMs

In a featurette released last week, the cast and Goddard speak about their excitement for the movie while dancing around specifics. “There’s layers upon layers upon layers hidden in the story,” says Lewis Pullman, who plays a bellhop. “It’s a wildly unpredictable, sinister thriller,” says Chris Hemsworth and his rakishly unbuttoned shirt. “A brutal love story between a bunch of strangers,” says Dakota Johnson. “The hotel is truly a character in the film itself.” Cynthia Erivo expands on that: “It pulls people who are slightly lost into it.” From Hemsworth, “In a very violent sort of way.”

“I wanted to feel that feeling where you’re sitting next to someone in the theater, and you both realize you don’t know where this movie is going to go,” says Drew Goddard. Well done, sir; you have already succeeded. The trailer’s comments section is filled with reactions like this:

Same, calgon. Same. The more you look at and try to puzzle through this movie, the more exciting and unnerving it seems.

Bad Times at the El Royale hits theaters on October 12th, 2018. Do you have any theories as to what in heavens is going on here?