We’re All Sam Winchester Caught in an Endless Tuesday Now … 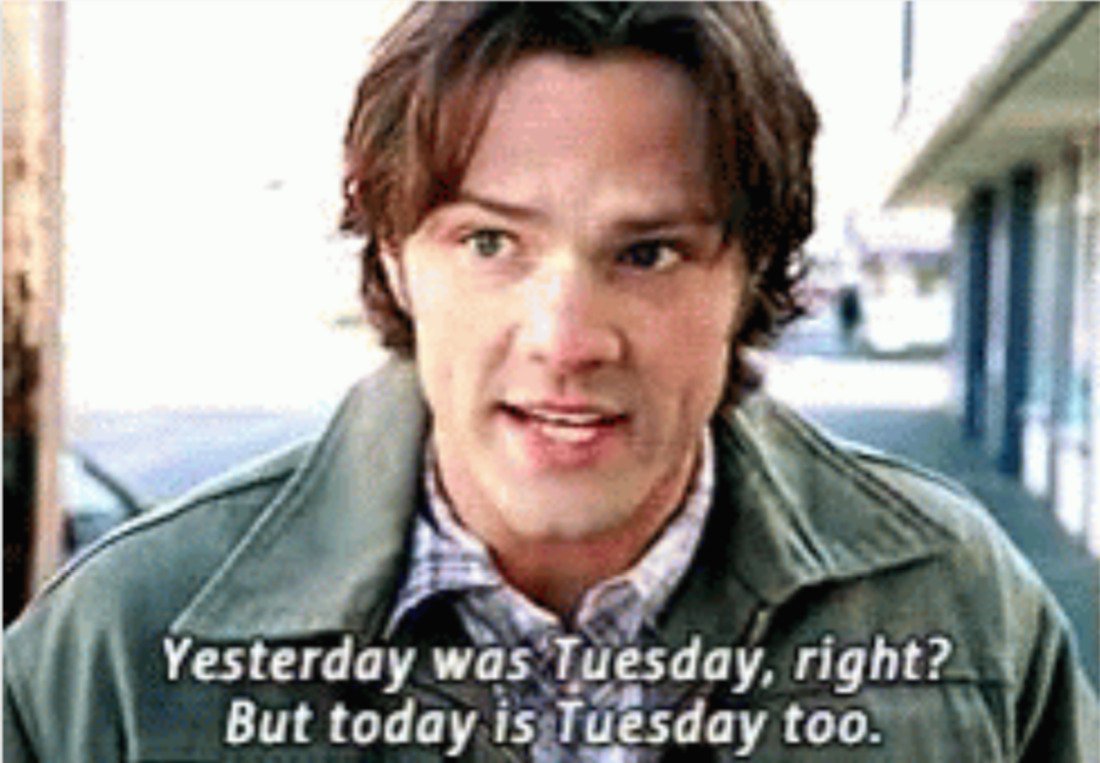 I spent all morning thinking it was Tuesday. But it’s not Tuesday … or at least, I’m pretty sure it’s not? It also doesn’t really matter because every day feels the same now and I suddenly really sympathize with the one time Sam Winchester was stuck in an endlessly repeating Tuesday on Supernatural.

Sam (Jared Padalecki) got stuck in his eternal Tuesday in the season three episode, Mystery Spot. It’s one of the best hours in the entire series, which is saying a lot when the show has over 300 hours available. The Winchesters were tracking a man who seemed to have disappeared at a “mystery spot” in Broward County, Florida—a county that voted for Donald Trump. So really, we’re stuck in our endless loop for similar reasons.

Now, there are a lot of great time loop episodes in genre television. It’s a trope that’s so fertile for fun and comedy, but also gives us a deep look into the characters stuck in the loop. Legends of Tomorrow had a great one that focused on Zari. But what makes this episode so excellent is the (objectively very morbid) detail that the time loop keeps resetting with Dean’s (Jensen Ackles) death. And every morning restarts with the same song by Asia.

And it’s kinda like quarantine, because it’s novel … until it’s not. And If we’re Sam here we’re just stuck, watching people suffer and stuck in the same loop, slowly losing hope as nothing we do changes it. Of course, maybe there’s hope because Sam did change it! He caught the guy who set it up, the Trickster (Richard Speight Jr.) who was trying to teach Sam a lesson. And Sam goes back to regular life that’s forever changed because Dean stays dead and Sam is broken by it. Does that foreshadow the empty, forever changed world we’ll get back to after this?

Wow. This got dark.

The reality is, so does the episode and so do our thoughts on boring, bad days … BUT, the good news is, it’s not the end. Sam finds a way to reset, one last time. He gets Dean back and, sure, Dean does eventually and inevitably die at the end of the season, like the Trickster wanted Sam to understand, but that doesn’t stick either.

So, yeah. We all have lost track of the days. We’re all tired of eating the same breakfast again and again. Getting stuck in the same loop with the same people, like some literal cosmic joke. We want out but we’re reasonably scared that life won’t be the same when we do. But … we will. Things might be different, we might learn some tough lessons. But we’ll get through and we’ll get some good memes out of it. Or that’s at least what we hope.