Are you ready for a new voice in Night Vale? 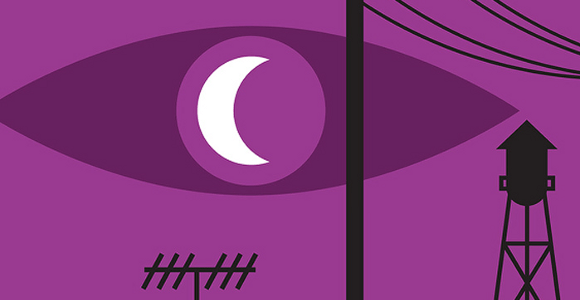 “Faceless Old Woman” is another episode that’s largely addressed to “you,” though this seems to be a different “you” than in “A Story About You.” Regardless, I love the idea that Cecil is directly speaking to me or a specific citizen of Night Vale. It always makes the narrative feel so much more pressing.

Cecil starts the episode by saying that you have a faceless old woman secretly living in your home. She always stays out of sight, but enjoys touching your face while you sleep and using your internet to look up pictures of dead wolves. She’s probably nothing to worry about. Probably.

Speaking of interesting women, Cecil’s just gotten an update from Dana. She’s still trapped in the Dog Park but seems to be doing pretty well for herself. She’s actually made friends with the Man in the Tan Jacket, who I guess can go in there at will. Does this make him related to the Hooded Figures or is he somehow more powerful than them? Dana has not had any luck in figuring out his mysteries or remembering his face, but she agrees with Old Woman Josie’s story that he’s a fly salesman with a suitcase full of trained flies. Dana seems very impressed by how skilled the flies are. She also says that the Man in the Tan Jacket is a pretty cool guy. If only we could learn more about him.

After some community health tips that suggest you are being turned into some sort of soil-loving monster, we get an update on the Faceless Old Woman who secretly lives in your home. In fact, she has a message for you, one she wants to deliver personally. That’s right, this early in the series it’s still a shock, but we actually have a voice besides Cecil’s in this episode. The Faceless Old Woman is played wonderfully by Mara Wilson, former child star and current internet darling.

The Faceless Old Woman has a fascinating personality. She clearly knows about many aspects of human existence, yet sees it all from an alien perspective. She is a constant observer who is rarely interacted with. She sees food in your fridge and is upset that she doesn’t understand the system of organization you use. She has favorite stains in your house and wishes you could see her, if you’d only find the right way to look. Also, she would like to know what your Wi-Fi password is.

The Faceless Old Woman is an excellent character and I think Wilson’s acting is some of the best in the series. She uses a wonderful voice that seems wise and alien, creepy and vindictive, yet also curious and sympathetic, sometimes over the course of a single sentence. I don’t know how she got involved in Night Vale but it was an excellent casting decision.

Cecil doesn’t know what to make of the recording nor how a woman without a face, and thus a mouth, could speak so clearly. He suggests either paying more attention at home or protecting yourself by breaking all your mirrors. In fact, Cecil doesn’t seem to like mirrors at all…

As my mother used to tell me, “Someone’s going to kill you one day, Cecil, and it will involve a mirror. Mark my words, child!” And then she would stare absently through my eyes until I giggled. Ah, I miss her so much.

Well, that’s ominous and worth filing away.

We also get an update about Khoshekh and his kittens. Amusingly, the station is not allowed to keep the kittens, which have been adopted, but they also cannot move them from their fix positions in the air of the men’s restroom. So, functionally it seems that the station has kept them in all but name. Unfortunately Cecil is not able to show us what Khoshekh or the kittens look like because 1. Radio is not a visual medium and 2. Anyone who tries to take pictures of the cats dies an agonizing death. Oh well, at least Khoshekh’s meow sounds cute. And by cute I mean terrifying and monstrous.

Back with “you”, it seems that government agents are converging on your house. They are upset that the Faceless Old Woman has alerted you to her presence. Perhaps there is something dangerous that she might tell you. For some reason this means you must be destroyed. There is also an aside about how Santa Claus is actually a group of drugged-up bears that is released every Christmas Eve in Night Vale. How festive. Anyway, as we await your impending destruction Cecil takes us to the weather.

This episode’s weather is “Long Gone” by Mary Epworth.

When we come back the Faceless Old Woman has another announcement. She apologizes for the trouble she’s caused. She actually only spoke to you because she was having trouble getting online. She wanted to know if Night Vale mayors were required to have faces. On a related note, the Faceless Old Woman heard that Mayor Pamela Winchell is retiring and has decided to announce her candidacy to be Night Vale’s next mayor! Oh, Faceless Old Woman, you’ll always have my vote.

Meanwhile the agents from the vague yet menacing government agency have withdrawn, apparently satisfied that their secrets are safe. Before leaving they release several thousand spiders into your home, but that’s basically a party favor.

I like this episode. It’s got a good structure and introduces one of my favorite characters. Still, I cannot deny that I am a shipper at heart. Get your finest squees ready, folks. Next time we’re taking a look at a certain couple’s First Date!

And let’s not forget the Conspiracy Tracker!

1. Angels are living with Old Woman Josie and the City Council wants to capture them.
2. There’s a house that doesn’t exist.
3. The Apache Tracker died to save Carlos’ life.
4. Time isn’t real in Night Vale.
5. Cecil wants to be swallowed by a giant snake.
6. There’s a city of tiny people underneath the Desert Flower preparing for war.
7. Literal five-headed dragon Hiram McDaniels wants to be the next mayor.
8. Pets become perfect when you accept them…
9. What the heck is the dog park?
10. Russian=Weirdness
11. Cecil hates Steve Carlsberg for unknown reasons.
12. Night Vale has a surprising fixation on actor Lee Marvin.
13. Night Vale is prone to duplication and Desert Bluffs is one of the duplicates.
14. A dark planet is calling to people.
15. People are shipping crates with tiny houses inside.
16. There’s an old oak door on John Peters’ farm.
17. Desert Bluffs is controlled by the evil company StrexCorp.
18. A blinking red light is coming from somewhere unknown.
19. Simone Rigadeau thinks the world ended decades ago.
20. Cecil doesn’t know how old he is.
21. Earl Harlan thinks he and Cecil could have had something.
22. Mayor Winchell is retiring, possibly not by her own choice.
23. The Faceless Old Woman is running for mayor.
24. Cecil will be killed one day and it will involve a mirror.