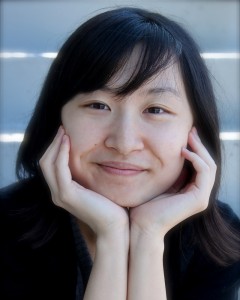 Have you ever found yourself longing for a webcomic that’s part slice-of-life and part intense time-travel adventure? Your prayers have been answered with Saint for Rent, a comic that blends sci-fi, fantasy, and queer love in a world where time-traveling is open to tourists and Saint is the one running an inn for them. We interviewed creator Ru Xu about the wonderful and unique setting of her world.

TMS (Alex Townsend): The basic premise of Saint for Rent is that it’s about inns for time travelers and the people who run them. Can you expand on that a bit? What was your original inspiration?

Xu: So, imagine there is a small Time Travel Society hidden in ours. People from different time periods occasionally find their way in. They’re the types looking for a home or adventure outside of the restraints of where and when they came from. They’ll find Inns embedded in various decades, and it’s up to them whether they want to stay in one lifetime or to keep Traveling.

When I was studying at SCAD [the Savannah College of Art and Design], I was always moving at the beginning and end of each quarter. From state to state, country to country, basically one home to another. Traveling feels like you’re in a pocket of limbo. You’re packed in with a bunch of strangers. You don’t belong anywhere until you reach your destination, and everything is very time-sensitive.

Flying from different time zones, especially, leaves me feeling disconnected. I’m jetlagged and am living by the clock of my departure point, but my body exists physically in … wherever I landed. I thought a lot about people who might live their whole lives in what should have been a transient feeling: the perpetual time travelers.

Around this time, I also had a character named Saint, who had a B&B with a magic closet in which guests would enter and exit. I combined the ideas and built the world from there.

TMS: Who are your main characters and what do you like best about them? 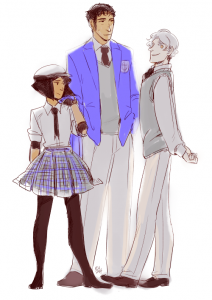 Xu: The narrative is mainly split between three main characters, who explore their time travel community from different perspectives and roles.

You have cheerful and accommodating Saint, who runs the CloverHouse Inn. His father founded their Time Travel Society, so Saint should by all rights be heir to this invisible world. But he’s kept isolated from it and receives very few guests. It’s not until his little brother barges back into his life with an angry Space-Time entity on his heels that Saint truly realizes how little he understands about the world their father controls.

There’s wanderlusty Armand. Readers watch him grow up as the story progresses. As a new Time Traveler at age seventeen, he meets Saint. He spends the next twelve years traveling to different eras, meeting new people, but invariably going back to see Saint.

And then, there’s shapeshifting “Kitty.” She makes Saint’s home her own, and sees Saint and Armand at their most vulnerable moments. She’s the first of a few supernatural beings we meet. But she’s also the one that doesn’t quite belong in this world. I write her from personal experience, as someone who has had to deal with a lot of paperwork and waiting for bureaucracies while traveling. She faces a lot of red tape in Time Travel, but I’m still rooting for her!

There are many things I like about these characters. They’re distinct enough to let me explore the Time Travel Society from different angles. And personally, I just think they’re really endearing people looking for happiness and a sense of belonging.

TMS: When it comes to time-travel stories do you prefer ones where history can be changed or ones where there’s no escaping destiny?

Xu: Well, I like multiple timelines. I think it gives you the best of both worlds.

But it’s funny you mention this. Since a lot of time-travel stories focus on changing history and/or destiny, I wanted to deconstruct some of these tropes in Saint for Rent, or at least subvert them in unexpected ways.

TMS: Saint and Armand seem to have a very strong relationship. Are they a couple at this point? If so, will we see them explicitly acknowledge this in the future? 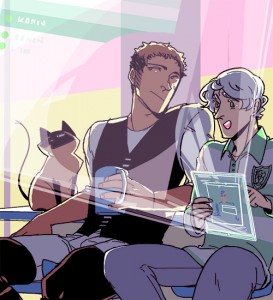 Xu: Okay, so I often get questions on this, and it’s hard to explain because it moves so slowly and quietly in the story.

I wrote their relationship when I heard the premise of The Time Traveler’s Wife. When time travel is involved, you meet your partner at different points in each other’s lives, right? And at different points, one partner will know more things about the other, such as their past and their vulnerabilities. At what point is a relationship organic, and at what point is one taking advantage of the other? Are the people involved aware of this?

Saint and Armand mean different things to each other at different points in their lives. As of Chapter 6, you’ve seen a young Armand start to fall for Saint, but Saint has already known older versions of him. Saint doesn’t want to say anything that will alter the Armand that he cares for. And these older Armands have had similar thoughts toward Saint. Ultimately, both Saint and Armand want the other to reach the same conclusion independently, but it’s complicated when their relationship is nonlinear.

TMS: Saint for Rent contains time-travel, over-lapping timelines, and many secret conspiracies. At the same time it also seems to have a very tight plot. As a writer, how do you balance these elements?

Xu: Overall, there’s an outline I follow. It’s easier to think of the story in arcs. Chapters 1-5 were the first arc, which introduced the characters and the world. The second arc will focus more on expanding the Time Travel Society and how it interacts with the normal world.

I accept that this is a narrative in which I have to keep everything in motion. I always try to use the current chapter to set up later plot points, but I let the characters grow more naturally. I like the spontaneous interactions between them, and I’m usually happy with how they develop.

TMS: Since we see all the characters at varying points in their lives, how do you decide which scenes to show in what order?

Xu: I try to keep it logical, so I drop side stories alongside the main narrative to explain where and when certain characters are coming from. Sometimes readers are confused, but I always hope that they’ll keep reading to see the side stories click into the timeline for that “Aha!” moment.

TMS: Saint for Rent has very creative designs, from the ribbon-like bodies of the consultants who guide time-travelers to the glowing “visas” printed on everyone’s arms to the GIFs you incorporate into the pages. Where did these ideas come from?

Xu: Thanks! I’ve been working on SfR since 2010, so it’s been influenced by a ton of different inspirations. I can address the three you brought up!

The Consultant character’s design is essentially what she thinks humans look like. She’s a Space-Time being that only has a very loose concept of what humanity is. Although she is abstract about the general human figure, you see her focus on details that she likes, such as hands and ears.

I designed the Visas like watches for most Time Travelers, in that they are usually found on the hands and wrists and Travelers can check them for time-related purposes. At first, I thought maybe it’s too obvious of a visual gag, but then I happened to catch an inflight cut of In Time starring Justin Timberlake. I got mad someone beat me to the punch and just used it anyway.

Regarding the GIFs in SfR, Homestuck and looping cinemagraphs were starting to get really big in 2011. At the time, I wanted to make a comic in which the animations were small and mostly contributed to the atmosphere of the scene. And here we are, five years later!

TMS: Do you have a definite end point in mind for the comic?

Xu: Hopefully around Chapter 15, which concludes the third arc. I’m almost halfway there at this point, which is surprising. It took about four years to get here, so if all goes well, hopefully it’ll only be another four years to completion. Hopefully…

TMS: Is there anything else you’d like to talk about?

Xu: Working on a story in which time travel is mentioned casually has made me incredibly self-conscious about how often I use the word “time” in a conversation.

Saint for Rent can be found here, where it updates three days a week. Also, stay tuned for more from Ru Xu as she will be releasing a middle grade graphic novel next January!