We All Love the Big Stuck Ship 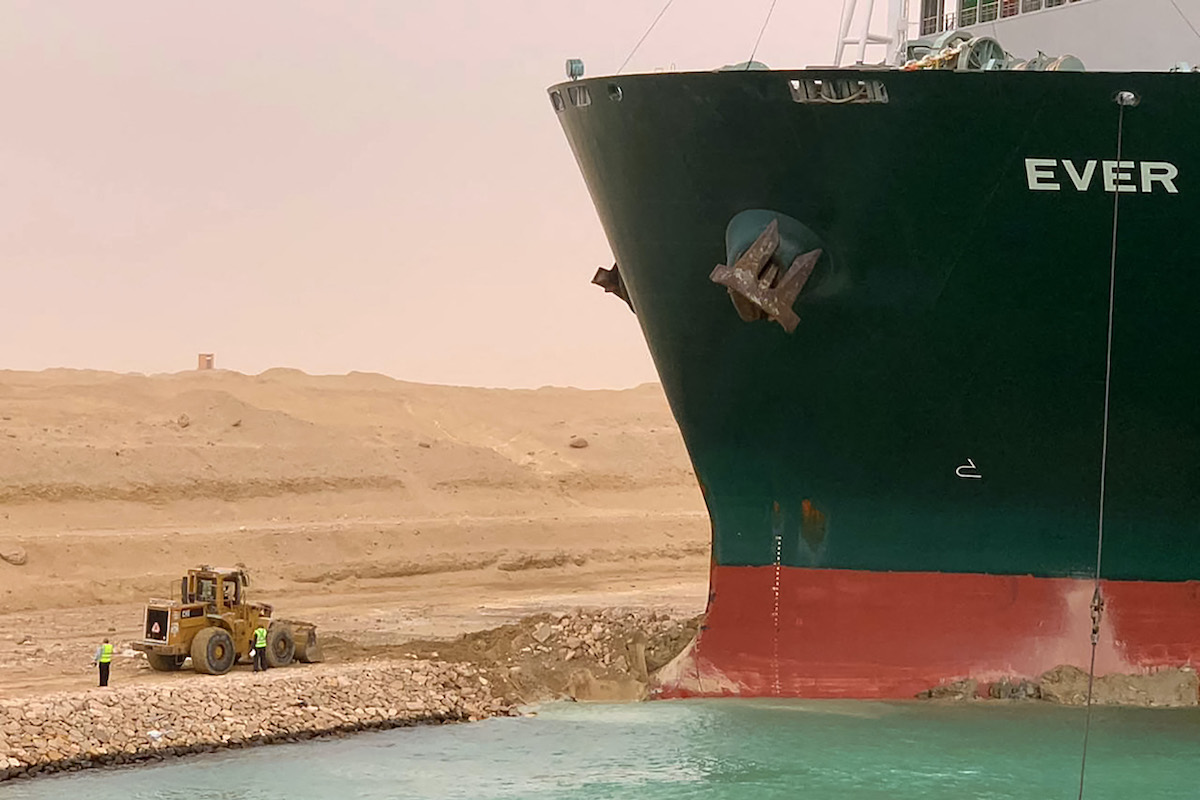 Over 200 ships are currently stuck waiting to pass through Egypt’s Suez Canal, thanks to the enormous shipping vessel the Ever Given, which has gotten lodged sideways, blocking the entirety of the waterway and shutting down all traffic in both directions.

There are, to be sure, some major problems that have arisen from this blockage. The delays to shipping worldwide will be massive, not just because of what is happening in this shipping lane, but because as other ships reroute, it will cause jams at other ports. Plus, the pandemic has already created a shortage in shipping crates worldwide, so the dramatically increased turnaround time on those currently stuck will only slow shipping even more.

As Peter S. Goodman writes in a column in the New York Times, the “stuck ship is a warning about excessive globalization.”

It’s not just goods that are stuck, either. Amanda Mull writes in The Atlantic, “Hundreds of thousands of ship workers have been stranded on various vessels for months because pandemic protocols in their home countries prevent them from being repatriated, layering a looming labor crisis on top of an ongoing logistical one.”

Plus, the longer these ships are stuck, the more fears of piracy increase.

The big stuck ship is a problem.

And yet I love the big, stuck ship. We all do.

America loves the big boat that is fucking everything up.

We love the boat because its problem feels so simple. In reality, there is a lot of science involved with what went wrong and why it’s so hard to right. But from another angle, the problem is just that the boat pizza’d when it should have french-fried. Boat went wrong way. Boat stuck.

I love that the boat is stuck because every other piece of global news is so hard to comprehend or explain.

The boat? It’s just stuck. Stuff won’t go. Boat needs to be not stuck. That’s it.

There is something fascinating and weirdly relatable—even aspirational—about this giant behemoth (she is as long as almost four football fields, as long as the Empire State Building is tall) just trying to do her job and getting it so, so wrong. We feel for her, and for the (relatively) tiny diggers and tuggers tasked with getting her out.

You are NOT too much. You are ENTITLED to take up space. If the Suez Canal doesn’t have room for you that is the Suez Canal’s problem.

And while this is just a ship, it’s also not weird to feel proud of her. She spends every day and every night plugging away, traversing the oceans to bring us our silly little Amazon packages, and now she finally gets to stop. She can rest.

I know it defies logic, fact, and common sense but I am kind of rooting for the boat to stay stuck

I am so happy for the big stuck boat.

having a nice time imagining i’m the big boat. the world cries out for me to stop destroying global commerce. my response? toot toot :)