Researchers May Have Found Flowing Water On Mars | The Mary Sue

Potential Water Discovered On Mars, Still Not a Sign of Alien Life 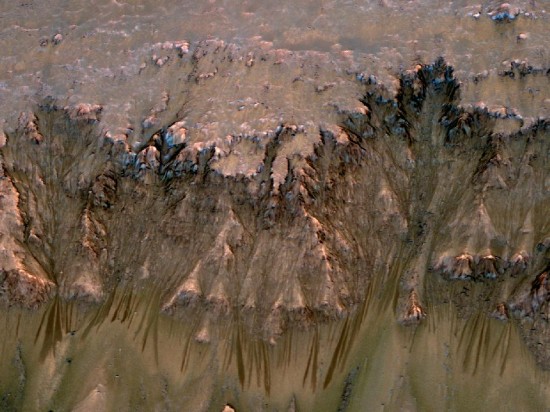 Every time NASA holds a press conference it is completely impossible not to start thinking, well maybe they’ve done it this time, maybe they’ve found alien life. It happened when the Internet got carried away with the arsenic life debacle last year. So, when NASA said they had a special announcement about Mars, who didn’t start hoping for aliens, really? But, alas, once again NASA has not found life on Mars. What they did find, pictured in the image above, is water. Or, what is most likely, probably, should be, water of some kind.

Now, liquid water on Mars, that is pretty cool. But what is the evidence? Images gathered by NASA’s Mars Reconnaissance Orbiter have showed dark, finger-like features that appear and extend down some of the slopes on Mars’ surface. These features appear during the warmest months on Mars, and retreat as it gets colder, leading to the conclusion that it could possibly be the result of water flowing on or beneath Mars’ surface.

The research was led by Alfred McEwen of the University of Arizona, who is the principal investigator for the orbiter’s High Resolution Imaging Science Experiment (HiRISE). In a NASA press release, McEwen said that the best explanation for the observed features is the flow of briny water. Briny water is a fancy way of saying that the water is salty. Saltiness would lower the freezing temperature of water, so that it could flow at the temperatures observed by the researchers.

The images show that the flows get longer and darken on the rocky equator-facing slopes during the late spring to the early fall. This seasonality, latitude distribution, and brightness changes suggest that a more volatile material is involved in the flows, but one has not been detected. The area is too warm for a carbon-dioxide frost, and in some places is too cold for pure water. This all suggests the water is a brine. Mars has a likely history of brine water, due to salt deposits that can be observed over much of the planet.

Now, flowing water on Mars, if that’s what this is, would be a pretty interesting find. That idea of alien life starts keeping up again, I mean life forms need water, right? Not so fast. Flowing water on Mars might be too good to be true. According to NASA, when the researchers checked the flow-marked slopes with the orbiter’s Compact Reconnaissance Imaging Spectrometer for Mars (CRISM) no signs of water were evident. The researchers speculate that this could be because the water dries quickly on the surface or is a shallow subsurface flow that the instrument can’t detect. Either way, there is no explanation for if or how this salty water may or may not sustain life if it dries quickly, is underground, or stops flowing during the cold season.

But, even if reality is still going to insist on bursting our alien life bubble, the study is itself interesting because if nothing else, the images are an anomaly. This is the closest that researchers have ever come to finding evidence of liquid water on Mars’ surface, and the results of their study are published in the journal Science. We’ll be watching this story to see if NASA can confirm that the flows are actually briny water, and what that might mean for the possibility that Mars could have a life-sustaining environment.