So You Married a Supervillain: Watching Jessica Jones as a Trauma Survivor 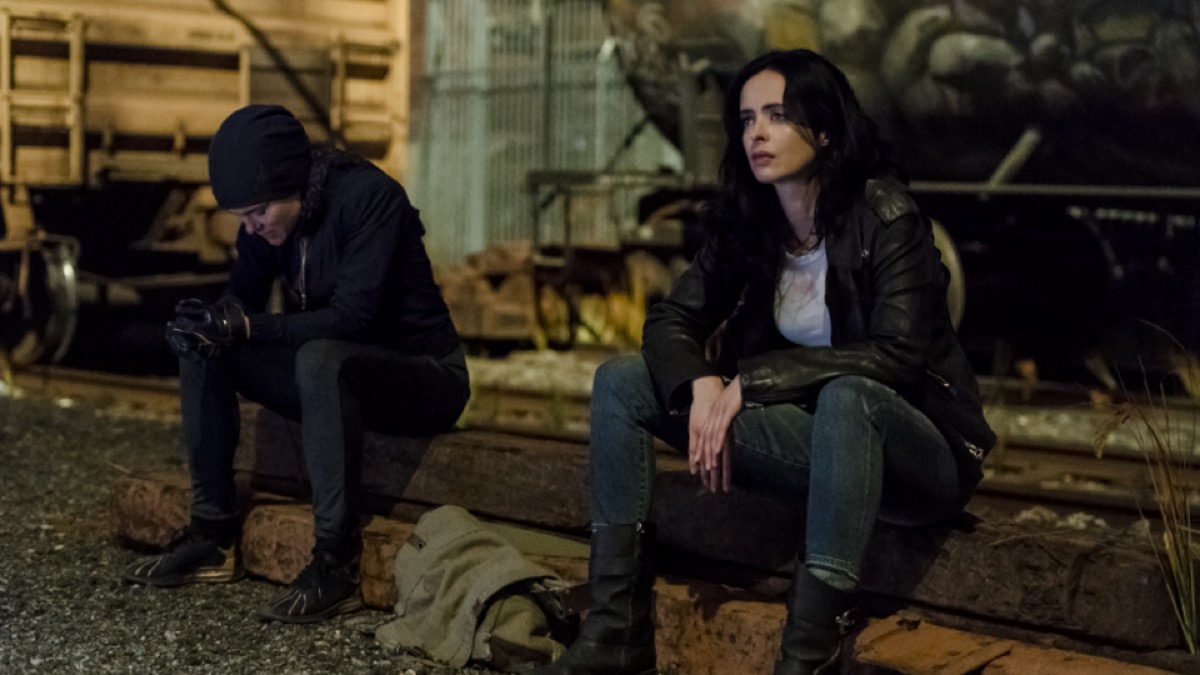 The night after I watched the first two episodes of Netflix’s Jessica Jones, I couldn’t sleep. I lay in the dark, feeling my own blood thundering through the chambers of my heart, reminding myself to keep breathing. I didn’t understand why my body was responding so viscerally to a television show. Yes, it had been difficult to watch in parts—but I had enjoyed it. Jessica Jones is engaging, the characters are complex and compelling, and thematically, it falls squarely at the intersection of some of my most beloved subjects: feminism and superheroes. So why did I feel like I was having a heart attack? Why did my chest ache? Why couldn’t I sleep?

People talk a lot about trauma triggers—so much so that in certain corners of the Internet, the abbreviation “TW” has basically become a meme—but until you’ve experienced the bizarre, immobilizing anxiety that comes from experiencing one, it’s hard to understand what all the fuss is about. Being triggered is not the same as finding something distasteful, offensive, or unpalatable. You can be triggered be relatively innocuous things—even things that you would otherwise enjoy: a scent, a snatch of song, or a word.

And the world around you shakes apart.

I have been Jessica Jones. I have been Trish Walker. I have even been Hope Shlottman, though mercifully without the tragic ending, and if you are one of the 4 million women in America who has suffered an abusive relationship, chances are you’ve been Jessica, Trish, and Hope, too. Jessica, who pushes everyone away, who finds solace at the bottom of a bottle. Trish, who holds herself together but struggles to find a sense of safety, even after turning her home into a fortress. Hope, who—failed by the legal system, devoid of a strong support network, and suffering the most raw and recent violence—is literally and figuratively imprisoned inside her own crippling fear and distress. Anyone who has ever been abused will recognize these stages of trauma, the painfully slow road that leads from victimhood to survivor.

This is why Jessica Jones is triggering, and this is also why Jessica Jones is vital. While it masquerades as a show about heroes and villains, ultimately, Jessica Jones is not a fantasy. It’s the reality of existing in a patriarchal society that does everything it can to silence, dismiss, and ignore women—that strips power and agency from us at every conceivable level: domestically, romantically, politically, legally, and in the media.

I watched the show in small increments, two or three episodes at a time. I couldn’t binge watch it; it was too much. I cried—a lot. The strangest and most unexpected scenes caught me off guard and plunged me into near-anxiety attacks—Trish doing everything she could to stand up for her friend, only to issue a public apology and retraction live on air, out of fear of what might happen if she didn’t. Hogarth refusing to represent Hope until more victims came forward. The chilling testimony of those victims. Hope, rail-thin and shrunken, telling Jessica with a small, hopeless laugh, “You should kill yourself.”

And of course, Kilgrave himself.

The trope of the attractive, eloquent manipulator isn’t exactly new. Some might argue it’s what makes a villain compelling; how can someone so evil appear so incredibly charming? Think Hannibal Lecter. Think Tom Riddle (prior to his unfortunate facial disfigurement). Think literally ever member of the Lannister family. Then, of course, there’s the serial rapist trope, which is deployed at the drop of a hat as lazy writer shorthand to tell the audience just how unspeakably evil this person is. Rape is typically used as a plot device in crime shows with disposable bad guys (I’m looking at you, Law & Order: SVU), and usually occurs in clichéd scenarios that perpetuate myths about both rapists and rape victims. The stranger in a dark alleyway. The perverted shut-in. The serial killer who targets sex workers.

Much has been written about Jessica Jones as social commentary on rape and rape culture, and I don’t disagree, but I think the show has illuminated a much more complex and insidious form of abuse—one that gets little, if any, traction in mainstream media. Yes, Kilgrave is a rapist, but his sexual abuse is not of the kind we often see represented on television; he abuses in the context of relationships that seem, to the outside observer, consensual, and it is this—his psychological abuse of his victims, his absolute and total control and manipulation of them, his dominance over their agency and their free will—that make him so utterly terrifying.

In October of 2014, I married Kevin Kilgrave. Of course, I didn’t know he was Kevin Kilgrave at the time. We had lived together for two and a half years and we were So In Love. Slowly, over the course of our relationship, my definition of love had been distorted, conforming to what he expected of me. Like those compelled by Kilgrave, there was a little voice in the very back of my head screaming almost constantly. Get out. Get out. Get out. I knew that my compliance with this man’s wishes, my acquiescence to his every desire and whim, was not what I really wanted, and yet, I did want it. I felt compelled to want it. My sense of self fell away and was subsumed by his ideal version of me—from the clothes I wore to the times during which I was allowed to speak to the way in which I was allowed to express emotion. (“Have you tried just not having feelings?”) I became a satellite for his desires. I disappeared.

Like Jessica on the rooftop, every time there seemed to be a viable escape route I realized just how little power I had to take action and advocate for myself. What should I have done? Called the cops? Called a lawyer? Excuse me, officer, my husband is abusing me. Where was the proof? Where was the evidence? He left no visible marks. Everything appeared to be consensual.

This is what makes Jessica Jones such a chilling viewing experience; Kilgrave’s powers, like Jessica’s, are subtle exaggerations of very real human abilities. Nobody can force a stranger to throw scalding coffee in their own face with a word, but Kilgrave’s ability to control others is the bedrock of every psychologically abusive relationship. Yes, you could theoretically refuse. You could say no. You could leave. But you are frightened, isolated, and confused. Appeasing this person 24/7 has become the only stable point in your chaotic existence, and you are terrified of disobeying. Your abuser reduces you to a shell, a doll, a toy. And all that’s left to do is to play along, to pray that it doesn’t get worse.

A woman is assaulted or beaten in the United States every 9 seconds. That’s around 33 women in the time it has taken you to read this article. 33 women like Jessica, Trish, and Hope. 33 women like me—and like you. Watching Jessica Jones is overwhelming, because it refuses to let you ignore the reality of that statistic, of what control and manipulation can do to a person, of how lives are affected, broken, and—tragically, and frequently—lost.

But Jessica Jones is also a show about strength. One of the most emotionally moving aspects is watching victims and allies band together to stop The Bad Guy, Kilgrave, who is a stand-in for every man who has ever abused his privilege—every man who has ever felt entitled to take what he wants with no regard for how it might hurt or violate others. The show is painful because defeating Kilgrave isn’t easy; it’s a complicated path riddled with in-fighting, differing agendas, mistrust, and the ever-present desire to just give up and walk away. There is no quick fix, no superpower great enough to solve the problem single-handedly. It’s only by working together, by trusting and loving one another, that the show’s protagonists can triumph. Even then, victory comes at a cost.

I have despaired. I have felt imprisoned by my own trauma, too afraid to reach out for help. I have woken up and reached for the whiskey bottle because coping without it was just too hard. I have felt alone. I have wanted to die, and, as an advocate for myself and others, I have lashed out with public statements only to have them forced back down my throat, only to have to smile and issue an apology through gritted teeth. I have been told one victim is not enough. I have been told that without evidence, there can be no conviction and no justice. I have felt powerless. I have wanted to give up.
I believe Jessica Jones is forcing a conversation that many of us have been having through back channels and private discussions for many, many years. Finally, using the metaphor of superpowers, the issue of domestic, sexual, and psychological abuse is being told in a way that is far more urgent and real than any other piece of media I have seen.We don’t all have super strength—but for those of us still fighting through the process of recovery, we are powerful. We have made it this far.

When we use our voices to stand in solidarity with one another, we are heroes.