Why Please Like Me Is Your Next Show to Binge Watch

There's really no reason you shouldn't be watching.

Having recently ended its third season, the Australian import Please Like Me is on a hot streak of producing my favorite seasons of television two years in a row. Finding the perfect balancing act of being biting, sweet, and hilariously funny, the show has an effortless charm, appealing to the masses by putting normalcy, (real normalcy, not sanitized normalcy) on-screen. Created by Josh Thomas, the show deals with everything from mental illness to coming out, but it’s never felt as if it’s hammering home a “very special message,” and it’s never tried to adopt a tone that would curve itself towards the dramatic, even if in any other series, the very nature of the narrative would have dictated it. There is no other show on television like Please Like Me, which is most individualist in its tone while managing to be universal in its themes.

This delightful little show is amazing. It’s funny, emotional, and poignant in ways for twenty somethings that I haven’t seen before on television, even with the shows that seem targeted at our demographic. Josh Thomas and co. have created a show that speaks to millennials without speaking down to them and without presenting an idealistic lifestyle that’s unachievable. It’s frank, and it’s open, and it’s naturalistic in a way where I’ve watched the show, listened to what the characters have said, and thought, “I see myself in them. I’ve said that. I’ve DONE that.” 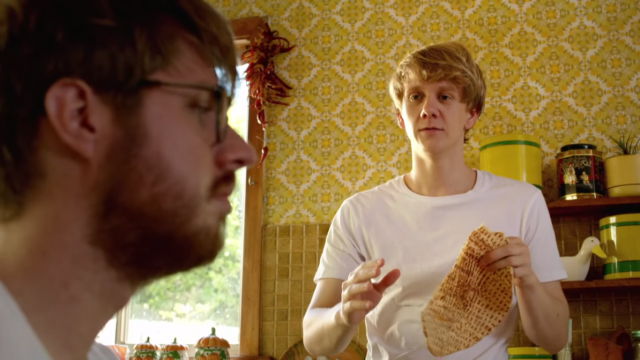 There are plenty of reasons why I’d suggest watching this show (which airs on Pivot, but you can catch up on Hulu), including the humor to the episode “Scroggin” in season two, which is a quiet master class in how to make subtlety effective and evocative television.

The show’s biggest highlight since the very beginning has been how they’ve tackled mental illness, something that Thomas had encountered in his family in his own life. On the show, his mother, Rose (Debra Lawrance), tries to commit suicide and is diagnosed with bipolar disorder. What’s great about the depiction is how they never make her moods anything radical or dramatized. She doesn’t rage or collapse into a crying mess (again, something I’m sure plenty of shows would be itching to do). Instead, there are hints in how her apartment is a constant mess. We see it in her moods when she flies into Josh’s apartments, on a high, and talks about all the changes she’s going to make to her life. What’s more, her depressive tendencies don’t simply vanish, and being on medication isn’t an instant fix for her. This is a lifelong struggle for Rose, and it’s one we see her grapple with for multiple seasons, going from highs to lows, from having to stay in the hospital to being cared for by Josh.

Rose isn’t the only one who’s depicted as living with mental illness. There’s Hannah, who we meet in season two, played by the hilarious Hannah Gadsby, who’s depressed and self-harms. Again, we see her struggling day in and day out, knowing that going off her medication is a bad decision, but having trouble to allow her rationale to dictate her actions. She talks about her self-harming, but just because she has one discussion doesn’t mean she stops. Arnold (Keegan Joyce), a character we also met in season two, has an anxiety disorder, one that is often debilitating.

The show is disarmingly honest about how mental illness works and is never afraid of making those who live with it real, flawed humans.

It’s hardly the only thing the show has dealt with delicacy, with the lead character, Josh, being told by his ex-girlfriend that he’s gay in the very first episode. This begins an exploration of the character, who’s insecure in the first season about even taking his shirt off in front of a boy, and how his coming out relates to dating. The show is also commendable in showing realistic sex between two men, making sure we see the condom wrapper and hear the characters ask if they’re OK. The sex scenes aren’t overtly sexualized but they’re also never diminished, they’re simply romantic, just like any other couple would be shot in a similar love scene.

Then there are the themes that run underneath the show’s structure—ones that don’t take the sole focus often but are present just by being written, such as the fact that the women are absolutely excellent on this series. Characters such as Rose, Hannah, Claire, Mae, and Ella are layered, interesting, funny, and sometimes heartbreaking, and they feel like real people we would know. Claire, Ella, and Hannah are all confident feminists who shut down any character who tries to either dictate how they behave, comment negatively on their body, or judge something they can’t control. The show demonstrates this beautifully in an episode where Claire gets an abortion, and it’s treated with care. Claire is never ashamed of her actions, and no one tries to change her mind. Josh listens as Claire says that her heart doesn’t always line up with her beliefs, when she says that she’s less bothered by getting the abortion than what the abortion actually means. To her, this is showing that she truly is an adult now, and she misses the times when she was a kid and naive to the world and its problems. Her emotions are a mess over the process, but she doesn’t feel regret or loss, just confusion.

There are smaller moments of empowerment as well, such as when Ella goes off on herself about being less into Claire because she’s pretty, even if she knows that’s irrational and influenced by a damaging, patriarchal mindset—or, in an even smaller moment, the fact that Ella was shown to have hair under her arms. Maybe this doesn’t seem like anything huge, but with the fact that in any and all apocalyptic series, women seem to be magically hair free even when they don’t have the basic tools to survive, it seems like a big moment.

I could go on and on about this show and just how significant what it’s doing is, even as the mainstream media is slow to catch on. They tackle these everyday issues and make them true to life, either with relatable and awkward humor or with poignant, emotional moments that always feel earned, rather than forced for drama. It’s a show that’s quietly broken some barriers, and the best thing about it is that I doubt it even realizes it.

Allyson Johnson is a twenty-something writer and a lover of film and all things pop culture. She’s a film and television enthusiast and critic over at TheYoungFolks.com who spends too much of her free time on Netflix. Her idols are Jo March, Illana Glazer, and Amy Poehler. Check her out at her twitter @AllysonAJ or at The Young Folks.