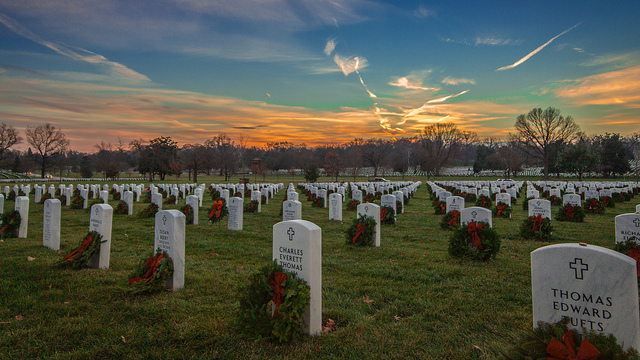 Despite earning the right to be inurned at Arlington National Cemetery back in 2002, the female pilots of World War II (Women Airforce Service Pilots, or WASPs) must once again fight for the very same right. Early last year, former Army Secretary John McHugh reversed the 2002 decision allowing WASP urns into Arlington. The hope is that new Army Secretary Eric Fanning may reconsider the latest directive and re-open the cemetery to the female servicemembers.

It’s perhaps more accurate to describe the WASPs as a paramilitary organization–they were never granted full military status despite being created with that objective in mind. WASPs mostly flew as test pilots for repaired airplanes, trained combat pilots, and towed targets for live ammunition target practice (yikes). Add this technicality to the fact that Arlington is getting mighty crowded and you might be able to see why Army Secretary McHugh made the decision he did.

Still, though. That does not excuse the fact that these women played an integral part of the war effort, and being granted the honor of resting amongst their peers is the least that can be done for them. What changed between now and 2002? Was capacity not something taken into consideration over a decade ago? It’s hard to imagine that it wasn’t, to be completely honest.

The Washington Times highlighted the story of Elaine Harmon, a WASP who recently passed away and whose ashes are currently resting in a home closet. Harmon’s family refuses to inurn her anywhere other than Arlington, as per her earned rights as a veteran.

As of press time, there are almost 13,000 signatures on a change.org petition created by Harmon’s grandchildren asking the current Army Secretary to change the decision that essentially denies the WASPs their well-earned rights. It’s important to note that WASPs aren’t the only group being denied posthumous entry into Arlington. The Merchant Marines are another large organization that did not earn full military status.

It’s really hard to understand the rationale behind denying WASPs a right promised to them when they were recognized as veterans in 1977. According to Texas Women’s University history professor Kate Landdeck, “It is just mean-spirited for the secretary of the Army to question their value to their country. Again.”

Here’s hoping this decision is reversed soon so that the remaining 100 or so surviving WASPs get what they so richly deserve as veterans who’ve served this country.