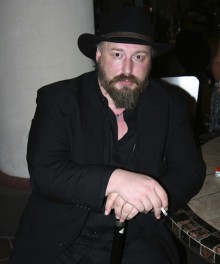 “I was just thinking about the day Jim Lee and Scott Dunbier took me and Bryan Hitch and a few other people out to dinner in London in order to explain to us that DC were buying Wildstorm.  What they were really worried about was how Alan Moore was going to take it.  I spoke to Alan a couple of days later.  “I’m affecting a cane, these days,” he said, “and when I got out of the taxi I took to meet them at the train station, they saw me emerging from a black car with what looked like a cudgel in my fist and went very pale.’

I still wish I’d thought of that, as occasionally I have to walk with a cane and chose not to take it to London with me because the leg was behaving itself.”

Warren Ellis, and he’s actually talking about the end of Wildstorm, from here he goes on to make some (more) interesting points, which you can read after the jump.

Long time ago.  No-one has to worry about what Alan thinks now.  And Wildstorm has gone from a pre-eminent comics-store brand to an iceberg station where 90% of its business is done invisibly to the industry.  Those tie-in books sell everywhere except in comics shops, and evidently sell in large numbers.  But they come under the rubric of “custom” publishing, and apparently will now be moving their production base to Burbank with all the other “not your standard comics” stuff.

I haven’t followed too much of Wildstorm’s output in the last few years, aside from Ex Machina and The Winter Men.  Haven’t read an issue of The Authority since, I think, the early part of Ed Brubaker‘s run.  But I hope that everyone who worked there had the experience I had, of being able to play fast and loose with everything.  The imprint and its culture was a necessary counterbalance to the extremely rigid and regimented parent label.  And I regret that there won’t really be a place at DC Comics now to go a bit slipstream and play some loud noisepop in the garage the way me and my friends did back then.

We regret it too.

The point that Wildstorm stuff sells better in trade paperback than in single issues (at least, that’s the fundamental difference between what is sold in “comic shops” and other places that would sell Wildstorm books) is one more compelling reason why DC, in trying financial times, would consider Wildstorm something of a liability.  (Other than its history of publishing creator owned content, as I implied.)

Of course Wildstorm sells better in trade.  Its long running series get passed from writer/artist to writer/artist, and the fans like to wait and see if the book is going to be good or not this story arc.  Of course, regular readers of DC also wonder whether a book is still going to be good after a creator change up. The difference is, they buy it anyway, because it has a specific character in it.

It’s no surprise that DC might find Wildstorm consumer behavior baffling and would want to do away with it.